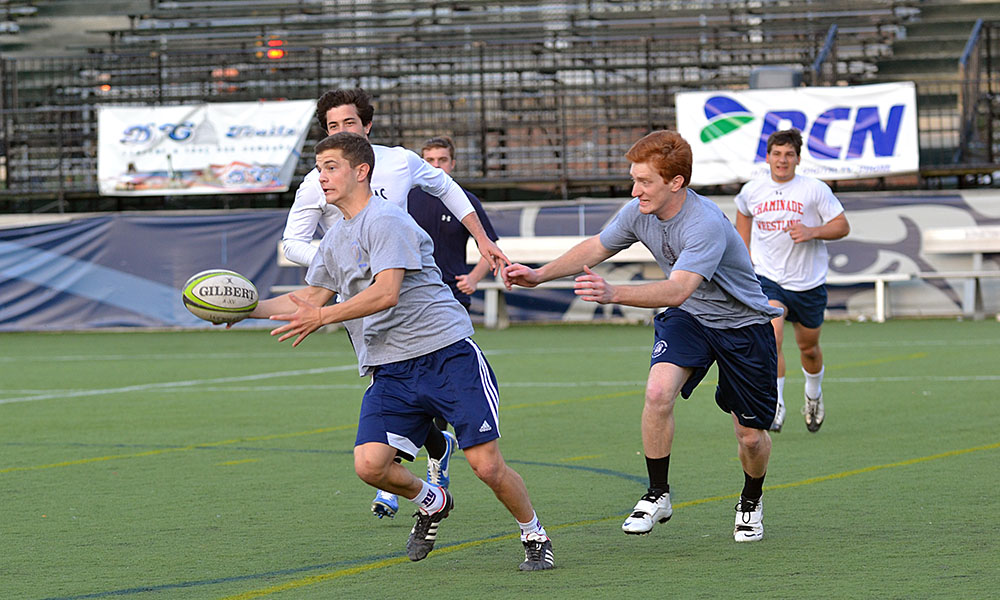 While the successful Division I Hoya sports squads garner the most attention on campus, club sports make up a substantial portion of the undergraduate body at Georgetown, with over 1,000 of the 7,600 enrolled students belonging to at least one club team. There are over 30 club sports teams on campus, which include standard teams like soccer and basketball, but also teams for equestrian, fishing, and rock climbing. Many of these programs are selective and compete at a high level against other universities.

The Georgetown University Women’s Rugby Football Club, for instance, has won the the Potomac Rugby Union championship four times since its founding in 2000, and continues to compete in Division II. Club baseball is a perennial playoff contender. The women’s squash team won the most competitive championship available for their division, the Epps Cup, in 2011.

However, the medical attention given to club programs is not held to the same standards as that given to their varsity counterparts. Although it has been a concern of the Advisory Board for Club Sports, these athletes are not given access to a trainer— considered an essential resource at advanced levels of competition. Members of varsity teams have trainers on-site at games and are provided trainers when something goes wrong at practice. Club sports athletes, however, have to make do with less specialized attention.

Alex Skarzynski (SFS ‘15), the current safety representative for the ABCS and the elected chair for next year, has been working on getting funding for an athletic trainer as well as other medical improvements for club sports.

“We are currently in the process of attempting to get an athletic trainer,” Skarzynski said. “It is something a lot of people are talking about on campus. That being said, at a big university like this, before you do anything like this, you have to sort out the logistical issues, you have to understand funding, liability, all those things. So we are taking a lot of time, making sure it’s done right. Nobody can guarantee that it’s going to happen, but we are doing everything we can and we are progressing far along this process of bringing a trainer to Georgetown.”

Currently, the procedure depends on the severity of the injury. Athletes are left to fend for themselves if an injury is deemed minor, or they are sent to the Student Health Center.

In the case of serious injuries, club athletes rely on the emergency room of nearby hospitals and the Georgetown Emergency Response Medical Service, for serious injuries. During events away from campus, the ABCS requires that the nearest hospital is notified in case of any injuries. There are sports doctors on staff that are connected to the ABCS and are available, but only by request.

Michael Lindsay-Bayley (MSB ‘14) is a member of both the tennis and soccer club programs. Lindsay- Bayley sustained injuries to his knees during an intramural basketball game after the club seasons for the fall semester had ended. Lindsay- Bayley made an appointment with the Student Health Center and, after two weeks, went to receive medical attention. The doctor that he saw there was unfamiliar with sports injuries and misdiagnosed the problem, but sent him to physiotherapy at Georgetown University Hospital.

“I went [to physiotherapy] and they knew exactly what they were talking about. I didn’t quite know the details of my insurance plan with regards to physiotherapy,” he said.

“I thought I was going to get eight free visits. It turned out that I was only going to get $60 off the total cost of each session. I was getting hour long sessions, which was two sessions at a time. After two sessions, I asked how much it was going to cost, expecting it to be $150, but it turned out to cost … around $560 for my two sessions. That was too much, so I couldn’t carry on with that,” he said. “There are a couple clinics in D.C. where you don’t need to give insurance details, it’s like $150, but even that is too steep for me to do, so I just carried on resting since then. I’m playing sports again, but my knees aren’t great.”

Tim Hughes (COL ‘13) is the president of the club baseball team at Georgetown. While Hughes has not been seriously hurt during his time on the team, he has seen his fair share of injuries.

Hughes said, “We’ve had players on the team with separated shoulders, we’ve had two torn ACL’s over the last two years. We had one guy who seriously threw out his elbow playing baseball. So, a couple pretty bad ones.”

Athletes in every level of sport are vulnerable to ACL injuries. ACL tears are one of the most prevalent knee injuries, and rehabilitation alone is not enough for athletes to recover from this injury. Usually, in order to play again, an athlete will require reconstructive knee surgery and ample recovery time, which ranges from multiple months to a year.

The anterior cruciate ligament is one of four major ligaments in the knee, allowing the knee to rotate properly and expanding lateral movement. ACL injuries can result from a variety of causes, including sudden changes in direction, high impact jumps, and sudden deceleration—in other words, very basic components of any sport.

These injuries are usually serious and take multiple months to a year to heal when treated properly. This injury has recently affected many of the largest names in American sports, for instance, after tearing his ACL in December of 2011, it was considered a small miracle that Vikings running back and 2012 NFL MVP Adrian Peterson was able to return for Week 1 of the 2012 season. ACL tears have also been responsible for Derrick Rose and Rajon Rondo’s extended absences from the NBA.

Another issue at hand is care for concussions. Women’s rugby routinely suffers 1 or 2 concussions a semester. Head injuries have come into the spotlight in not only professional sports, but also in sports at the college and high school levels. Most prominently, many former National Football League players are suffering from mental illness and are taking action against the league after suffering repeated head trauma and not receiving proper treatment or protection. The procedure for playing after possibly sustaining a concussion has become more strict recently, but concussion testing has still not been completely integrated into club athletics.

“Concussions can be particularly dangerous to an athlete’s future health, so there are specific concussion treatment procedures,” Carter said. “Additionally, they can sometimes be hard to diagnose without proper medical attention, leading to a greater risk of repeated injury. Concussion testing and follow-up is something that we very much hope to combine into the athletic trainer program.”

As of late, the procedure for concussions is to go to the emergency room or to call one of the sports doctors at the Student Health Center to let them know that you have a concussion and need attention. Of course, it is important to have on-site concussion testing in order to prevent an athlete that has sustained a concussion from re-entering the game and possibly injuring him or herself further. Due to the possible cognitive impairment that could result if head injuries are not handled correctly, concussions are at the center of concerns for club athletes.

“I think there is definitely a lot to be worked on. That being said, we are in the process and we are making big strides toward getting increased medical care every year,” Skarzynski said. “Last year it was getting first aid kits, this year it’s hopefully working toward an athletic trainer and a concussion testing program.”

Club athletes at Georgetown have an increased risk of getting hurt compared to regular students. Facilities also play a large role in contributing to the increased danger.

“As opposed to the average student, we’re at a higher risk because we’re playing sports more often. Being at a higher risk, you would need somebody to go to, because injuries are going to happen,” Hughes said.

Hughes is not the only one who has qualms with Kehoe.

Lindsay Fountain (SFS ‘15), who plays for the women’s club rugby team, also sees the limits and dangers of insufficient practice facilities. She said they only practice the contact element of the game when they get the opportunity to practice on the Multi- Sport Field, where varsity football and lacrosse is played.

“Kehoe is really dangerous and limits our chances of succeeding because we can only tackle in 50 percent of our practices and because it results in injuries that keep our players unnecessarily out of practice and sometimes even out of games,” she wrote in an email to the Voice.

“Usually we’re left with the part of the field that receives little to no stadium lighting,” wrote Juliann Jefferson (MSB ‘14), a member of the club softball squad, in an email. “I’d definitely feel a lot safer practicing at a facility with better lighting.”

Contact sports in particular could benefit from having a trainer. Injuries commonly occur not only games, but practices as well, and at present, there is no medical expertise standing by to treat the athletes.

Before an athletic trainer can be brought in for the club programs, the ABCS has to negotiate with the Georgetown University Student Association, who is responsible for approving the funding that goes toward club sports. The ABCS submits a budget to the Georgetown University Students Association, who in turn allocates funding they think is appropriate for the given issues. This past year, the ABCS’s push in the medical area was for first aid kits. This was granted, and now these kits can be checked out by club sports that want to use them.

Though nothing is finalized in terms of getting a trainer for club sports, Skarzynski is optimistic. “We made a request for this athletic trainer funding to GUSA. They denied it as of now because they wanted to put together a plan … I feel very confident that [we could get a trainer] if we get a particular structure in order and we get a program that is sustainable and reasonable … GUSA said that they are committed to helping us get the money we need.” The ABCS submitted a request to the GUSA Finance and Appropriations Committee Board that outlined the funding that would be necessary for a program involving club sports trainers. However, the Board responded by saying that they would like the current funding to be used to get the program up and running. Hopes are that if this is successful, the Board will approve additional funding to allow the program to expand and improve.

Luke Carter (COL ‘14) is a member of GUSA who has been working toward gaining funding for a trainer program and concussion testing. He finds that there also needs to be input on the part of the administration.

“The University could definitely do more in terms of providing medical care for its 1,000 club sport athletes,” Carter said. “Some studies suggest that club sports athletes are even more at risk than varsity athletes for injuries, due to the lack of preseason training camps and the like. That said, if we were able to institute an athletic training program, it would be a massive improvement for club sports medical care.”

It is clear that club athletics could benefit from the presence of a trainer, but this program and improvements in concussion testing are even more important when considering the impacts that substantial injuries that are left untreated could have on the lives of athletes. The wait for funding is leaving this problem untreated and is leaving athletes vulnerable to injuries that could have very serious effects on their long-term wellbeing.

Medical treatment is clearly on the minds of the Administrative Board and GUSA, but the athletes themselves are especially concerned.

City on a Hill: Gentrification, depredation