Activists and District leaders crowded the Dirksen Senate Office Building this Monday as the Senate held its first hearing on the issue of D.C. statehood in 21 years. If D.C. is admitted as the 51st state—a prospect that supporters acknowledge as being unlikely—it will exclude all lands currently utilized by the federal government, such as the National Mall and the Washington Naval Yard.

The proposed state’s name, New Columbia, and constitution were decided upon by D.C. voters in a referendum in 1982. New Columbia’s state population would be roughly 645,000—more than the populations of both Wyoming and Vermont.

Senator Thomas Carper (D-Del.), the statehood bill’s sponsor, was present, however, its 17 Democratic co-sponsors were absent. Carper pointed to city residents’ lack of representation in Congress as a clear injustice.

“In my view, this situation is simply not fair. Neither is it consistent with our values as a country,” said Carper. “Perhaps most importantly, though, it’s not consistent with the Golden Rule: treat other people the way we want to be treated.”

The only other senator present was Sen. Tom Coburn (R-Ok.), who argued against the bill before leaving 30 minutes into the three-hour hearing.

“D.C. residents suffer an injustice … by not having a vote,” Coburn said, but decried the idea of statehood as a “legal and political absurdity.”

Coburn was the only witness to argue against the “New Columbia Admission Act,” while every other speaker—including Mayor Vincent Gray, D.C.’s Congressional Delegate Eleanor Holmes, and Professor Viet D. Dinh of Georgetown Law Center—addressed statehood as an issue of glaring importance. Paul Strauss, one of the District’s two “shadow” senators, spoke in favor of the bill’s constitutionality.

“I am suspicious of those who claim to support equality for the District, but oppose this bill as a remedy because of the argument that the District shouldn’t be a state because historically, it was only meant to be the the seat of the federal government,” said Strauss. “Among the historical aspects of our Constitution were enshrined the institution of slavery, lack of rights for women, and a host of other injustices, now corrected by Constitutional amendments.”

The issue of statehood reared its head again a year ago during the government shutdown, when the city was prohibited from spending funds on local services—such as garbage pickup, Circulator buses, and the DMV—due to congressional inaction. Under the statehood bill, D.C. would have authority over its own budget.

Monday’s hearing comes on the heels of President Obama’s declaration of support for statehood at a town hall meeting in Northwest D.C. this July.

While the measure was supported by those in the audience on Monday, the numbers paint a troubling picture for the statehood campaign. Only 18 senators, all Democrats, have announced their support the bill—far from the 51 required to pass through the Senate. No Senate Republican has shown any support for it, as D.C. statehood would grant two additional seats, most likely to Democrats.

Carper acknowledged the bill’s lack of support in the Senate, but pledged to continue working to raise awareness about statehood.

“My goal for this hearing is to educate a new generation of people about this injustice and restart the conversation about finding a more thoughtful solution,” Carper said. 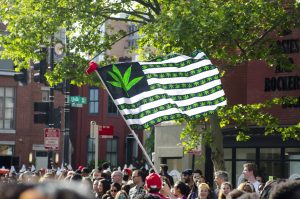