Almost a decade after OK Go’s chart-topping “Here We Go Again,” the indie-rock treadmill choreographers take another go with Hungry Ghosts. Though the band initially appears to trade in its prominent riffs for dance-worthy synth beats, we eventually discover the same old OK Go energy and inventiveness complete with a new set of viral music videos.

“The Writing’s On the Wall” is the clear standout. Paired with a mind-boggling video packed to the brim with optical illusions, this track showcases OK Go’s comfort as they settle into a new sound. The song features a captivating energy and a dance-rock tempo reminiscent of 1980s new wave favorites, such as New Order and Depeche Mode.

The album’s opener, “Upside Down & Inside Out,” is an effervescent track, setting the tone for the remainder of Hungry Ghosts. The band successfully explores funky, electronic melodies, often juxtaposed with melancholic lyrics, but the record stagnates halfway through. “If I Had a Mountain,” sounds like a trite ballad set over looping analog synth and the album’s closer, “Lullaby,” is aptly named, proving somnolent.

It’s clear then that Hungry Ghosts is top heavy. It’s disappointing and unsatisfying at times, especially considering the album starts off so strong and ends lackadaisically. OK Go, however, is moving in the right direction—after 16 years of innovation in its awesome music videos, it would be a shame if it refused to broaden its musical horizons and stayed on a familiar path that risks repeating a stagnant sound.

Hungry Ghosts probably isn’t an album that you’ll love from beginning to end, but it offers a glimpse of OK Go’s characteristic ingenuity, which—whether embodied in a warehouse-sized Rube Goldberg machine or in the band’s uptempo summer jams—continues to surprise its fans on this latest LP.

Voice’s Choices: “The Writing’s On The Wall,” “Bright As Your Eyes” 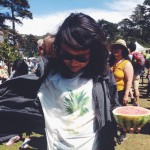 Dixie vilifiers not ready to make nice with the South

New culture of accountability at SAC?