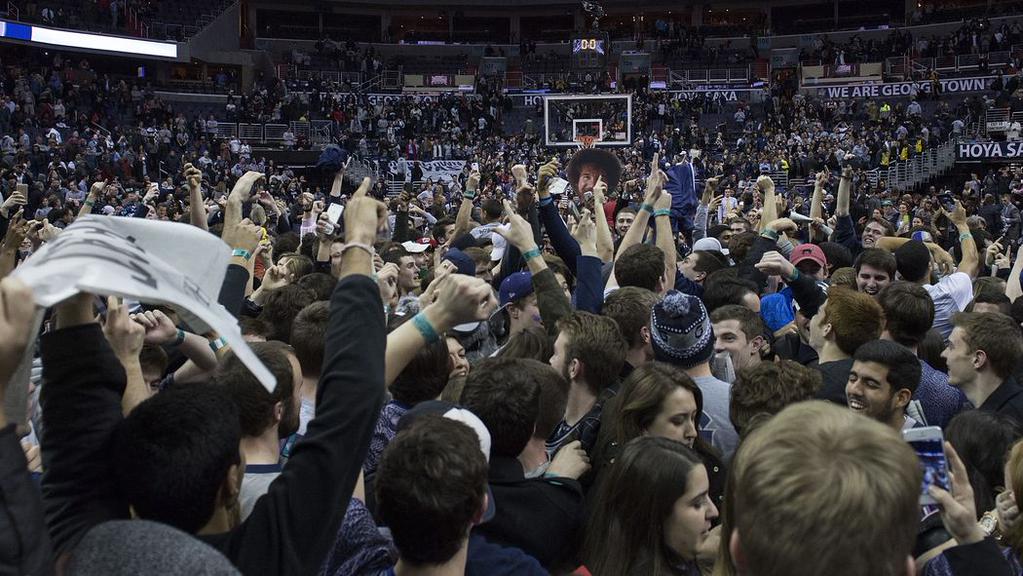 In the closing seconds of Georgetown’s blowout win over Villanova on Monday, the student sections at either end of the court surged forward, crowding the central aisles to get close enough to rush the court at the final buzzer.  On one end, senior guard Jabril Trawick walked to the baseline and held up his palm to the crowd, shaking his head in an attempt to halt the imminent court invasion.  And, for a moment, the crowd listened.  Calls of “Jabril says no,” rang out through the would-be front lines of the storming.  But then, at the other end of the floor, the mass broke through to the hardwood, and any thoughts of restraint were abandoned.  Soon the stands had emptied, and the storming-albeit delayed-was on.

In the days that have followed the game, many have questioned the decision to storm the court (skip to the 5:35 mark to hear the discussion).  The argument goes that, since Georgetown has long been among the elite programs in college basketball, students should not get this excited over a win against a conference rival such as Villanova, dominant as it may have been.  Tony Kornheiser, in the podcast I linked above, called it “beneath Georgetown”.

And he was probably right.  Georgetown was among the best college basketball programs in the nation for decades, and remains a necessary inclusion in any discussion of the best basketball schools of all time.  It is, in short, the type of program that should not rejoice over a regular season home victory, no matter how dominant.  And besides, Villanova isn’t even ranked No. 1.

But regardless of what they should have done, the fans stormed the court.  And while I recognize that it was the wrong move, I cannot ignore the fact that Monday’s game featured the most energetic crowd in my two years at Georgetown. If a little bit of that energy spilled over onto the court, then I’m alright with that.  Great programs require great crowds, and the ‘Nova game was one of the few times in the past couple of years that the Hoyas could boast a truly great crowd.

What happened after the game got all the attention, which is a shame, because what happened during the game was pretty fun to watch.  The fans’ singing and yelling rang throughout the Verizon Center from before tip-off to after the final buzzer.  The noises ranged from the regrettable “safety school” chant (Can we please retire that one?  We might as well hold up a giant sign reading “pretentious”) to the brilliant roller coaster move made to disrupt the Wildcats’ free throws during the second half.  It’s been done in many places, but Georgetown’s roller coaster (in which a section of fans leans in unison in different directions), was among the best that I have seen.

The energy was not all positive.  But at least it was there.  And energy, more than anything else, is what makes students want to go to basketball games.  No matter the quality of the team on the floor, the Hoyas need an enthusiastic student body in order to have any real home court advantage.

Tony Kornheiser devoted time on his podcast to talking about Georgetown basketball, and then again discussed the issue at length with Michael Wilbon on ESPN’s Pardon the Interruption.  He may not have been complimentary, but that attention alone is proof that Georgetown is once again a part of the national college basketball conversation.  Those who remember Ewing, Williams, Iverson and all those other past greats might shake their heads at something like a court-storming.  After all, Hoya fans should act like they’ve been there before.  But the students—especially the freshmen and sophomores—have not been there.  They have yet to witness Georgetown as a great program, so let’s not attack them for getting excited at the prospect of returning to college basketball’s elite.  For me, at least, energy in the present is much more important than reverence for the past, and with this in mind, Monday night’s crowd should be applauded.