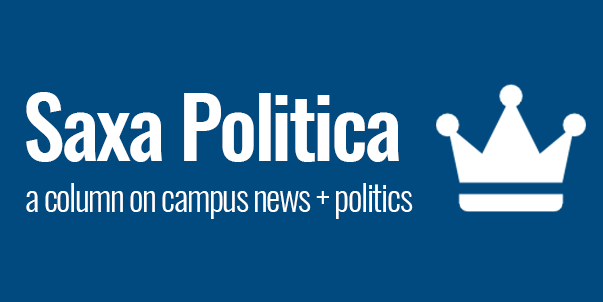 Each year, every freshman undergoes an uniquely overwhelming baptism of fire: the nail-biting Marino Writer’s workshop during NSO, the awkward business-casual interview with the president and secretary of some self-important club, and now, the September elections for GUSA’s Senate. This year, 22 students are vying for the seats that represent the four freshmen dorms. Candidates have already flooded the Class of 2019 Facebook group with pleas to put their name as their first choice on the Hoyalink ballot this Thursday.

Unfortunately, the apparent hysteria around the Senate elections seems to stop at the end of freshman year. Upperclassmen don’t seem to care about the candidates, or even to stand for election at all. According the list of candidates that the GUSA Election Commission published on Sept. 25, a grand total of zero people are running for a seat in either the Townhouse district or LXR. On Thursday, if you live in either place and text a handful of friends to login to Hoyalink and to write your name in, you might just get elected.

To make it clear, I’m not necessarily rallying against the senators themselves; they participate in meetings and roundtables with university administrators to give the student perspective on issues such as master planning, meal plan policies, support for sexual assault survivors, and others when the average  Georgetown student would not. The problems lie with the elections themselves.

A major problem is the design of the Senate’s constituencies, currently divided by where you live. In theory, such a design could promote outreach and exchange between the senator and the student. In reality, there is no such desired outreach and exchange. Can the average upperclassmen name the senator(s) who were elected in their district? Can most Senators claim to legitimately represent the residents in their district? I can’t recall a time when anyone from GUSA’s Senate ever reaching out to me or my roommates when I lived in Henle last year.

Another problem is the timing of the Senate elections. It’s great to open opportunities for freshmen, but it’s counterproductive for them to run for student government if they don’t know what role GUSA plays on campus. Every freshmen candidate is already promising to wave magic wands and inspire revolutionary change on campus. They promise to provide “off-campus meal plans” and to make “all freshman see themselves as one community as opposed to identifying with one particular dorm.”

The combination of underclassmen apathy and freshman frenzy fail to produce a representative student government. Instead, it contributes to the culture of GUSA as simply another club on campus that a self-selecting group of students participates in the day-to-day bickering and high drama. Those who become elected because enough of their friends on their freshmen floor bothered to check a box on Hoyalink become GUSA insiders, while those who don’t usually stop participating in student government altogether. It is an image that GUSA wants to shed, but because of these institutional restrictions, simply cannot.

Replacing the geographical constituencies with seats that ensure representation and participation from every class year would be a start. Getting students from different backgrounds, some of whom may not necessarily have the wealth to purchase free pizza for voters and print hundreds of campaign posters in color—even though the newly established Student Leadership Fund might help—is probably more important than making sure that the Senate has someone living in a townhouse and from VCW.

GUSA can also move the date of the elections to coincide with that of the executive, when students of all classes then know at least something about the issues on campus. Freshmen need to  realize that they run for GUSA to represent students in talks with administrators, not to fix leaky faucets in New South and organize intramural games. Although some people might say that the incoming freshmen class will spend half a year without any representation, freshmen can still get involved otherwise in other places, like the Freshmen Executive Committee where they can actually learn about the issues before they campaign for any change. It would be even more exciting for students to elect Senators who don’t necessarily agree with the winning ticket in the executive elections and to see dissenting Senators place checks on the GUSA President

These ideas aren’t new. If GUSA and its members believe that it should work to representative Georgetown’s diverse student body, it would be worth at least toying with some of the structural aspects of the Senate election. Yet, even though GUSA knows that upperclassmen remain apathetic year after year, no one has brought forth any reform proposals for the public to debate the discuss. I guess that begs the question: does the GUSA Senate belong to people in GUSA, or belong to the students who GUSA is supposed to represent?

Saxa Politica: It’s time to let students get on board