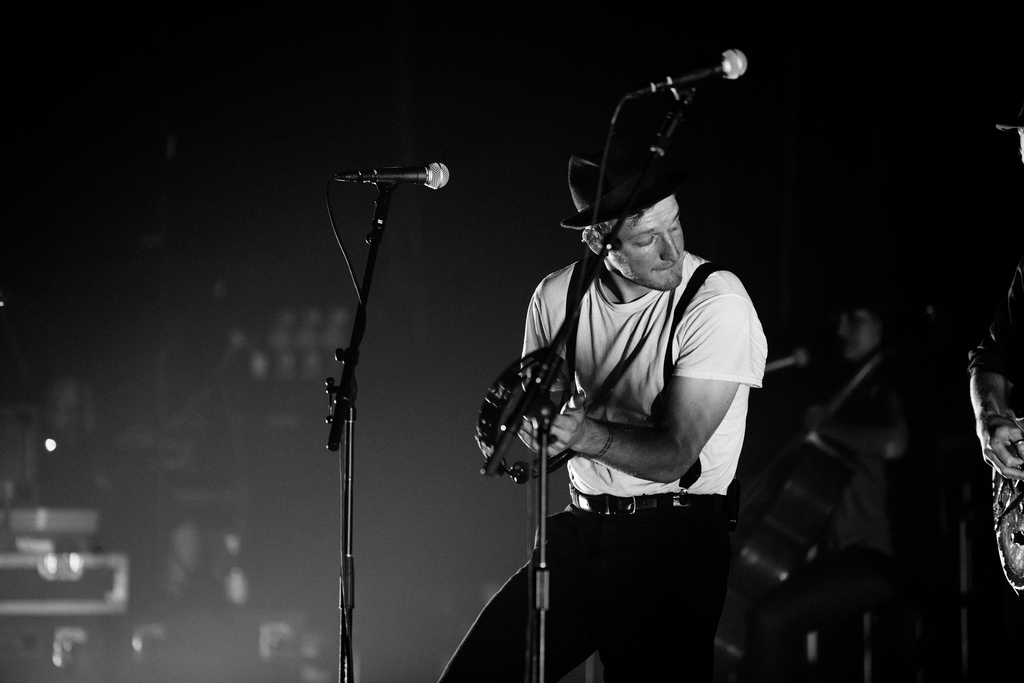 The Lumineers, the indie-folk band hailing from Denver, Colorado, performed at the Merriweather Post Pavilion on September 10th to a packed crowd. Featuring tracks from both their latest 2016 album, Cleopatra, and older hits from their self-titled 2013 debut album, the group showcased a nearly flawless set.

“There’s a line from this song… It’s a long road to wisdom / it’s a short one to being ignored. Thanks for not ignoring us,” Wes Schultz, the lead vocalist, shouted out to the crowd before playing “Flowers in Your Hair” near the beginning of the set. And ignore them they did not.

The Lumineers’ are a folk band, and they fully embrace this title. Instrumentally, the group keeps it simple, never venturing far past guitar, drums, cello, and a piano. In this simplicity, however, one finds a level of authenticity that can be absent from records that try to pack on more complex musical layers.

The opening hour featured many of their biggest hits, with Schultz serenading the crowd on “Cleopatra,” “Ophelia,” and “Ho Hey,” within their first few songs. The Lumineers’ lyrics are simple, but striking: the kinds one can pick up on after only listening to their songs a few times. As a result, most of the audience belted out their songs throughout the night, creating a feeling of camaraderie among the crowd. Their live set is just as strong as it is on the record; Schultz’s strong voice never faltered and each musician demonstrated clear mastery of his or her instrument.

Part of the magic of The Lumineers’ live performance is in their ability to blend grand, knee-slapping folk and intimacy at the same time. Even in a bigger outdoor venue like the Merriweather Post Pavilion, there was no shortage of personal connection to the band and their sound.

Their awe-inspiring set is spearheaded by Schultz, who truly knows how to connect with his audience. He is earnestly grateful, frequently thanking the audience and appearing genuinely humble, but he also packs added emotion into his live performance through personal anecdote.

Before “Charlie Boy,” Schultz explained to the crowd that the song is written about his father’s eldest brother who passed away while serving in the Vietnam War. The audience instantly feels a heavier weight on their shoulders, and when Schultz belts out “Charlie boy / Don’t go to war.” Schultz continued to touch on themes of grief by opening up to the audience about the passing of his father, who inspired both “Gun Song” and “Long Way from Home” from the latest record. This sincerity and depth makes it clear that the Lumineers are about much more than feel-good folk.

When Schultz performed a cover of Abraham Hovey’s “Where the Skies are Blue” and “Classy Girls,” the group quickly transitioned to a small stage at the front of the sweeping lawn, furthering the feeling of making a large venue feel small.

Although an entertaining show, the Lumineers fell short when it came to their show’s cohesion. Their set felt disjointed as a result of packing so many of their louder, more famous songs in the first third of their set. The songs slowed down and didn’t pick back up with quite the same intensity until they concluded with the faster paced “Stubborn Love.” This discontinuity may have been avoided by creating a more balanced set list, but nonetheless, their songs were so well executed that this was only a minor shortcoming.

The Lumineers do what they do well without feeling pompous or forced: their energy is infectious. They mysteriously manage to make the audience nostalgic for simpler times, transporting the audience to a childhood spent frolicking in fields on a farm (something that the band themselves may or may not have done)), and we love it. Their performance only solidified the fact that they’re able to surpass their first hit “Ho Hey”: the Lumineers, and folk, are here to stay.

Sleep on the Floor

Flowers in Your Hair

Where the Skies Are Blue