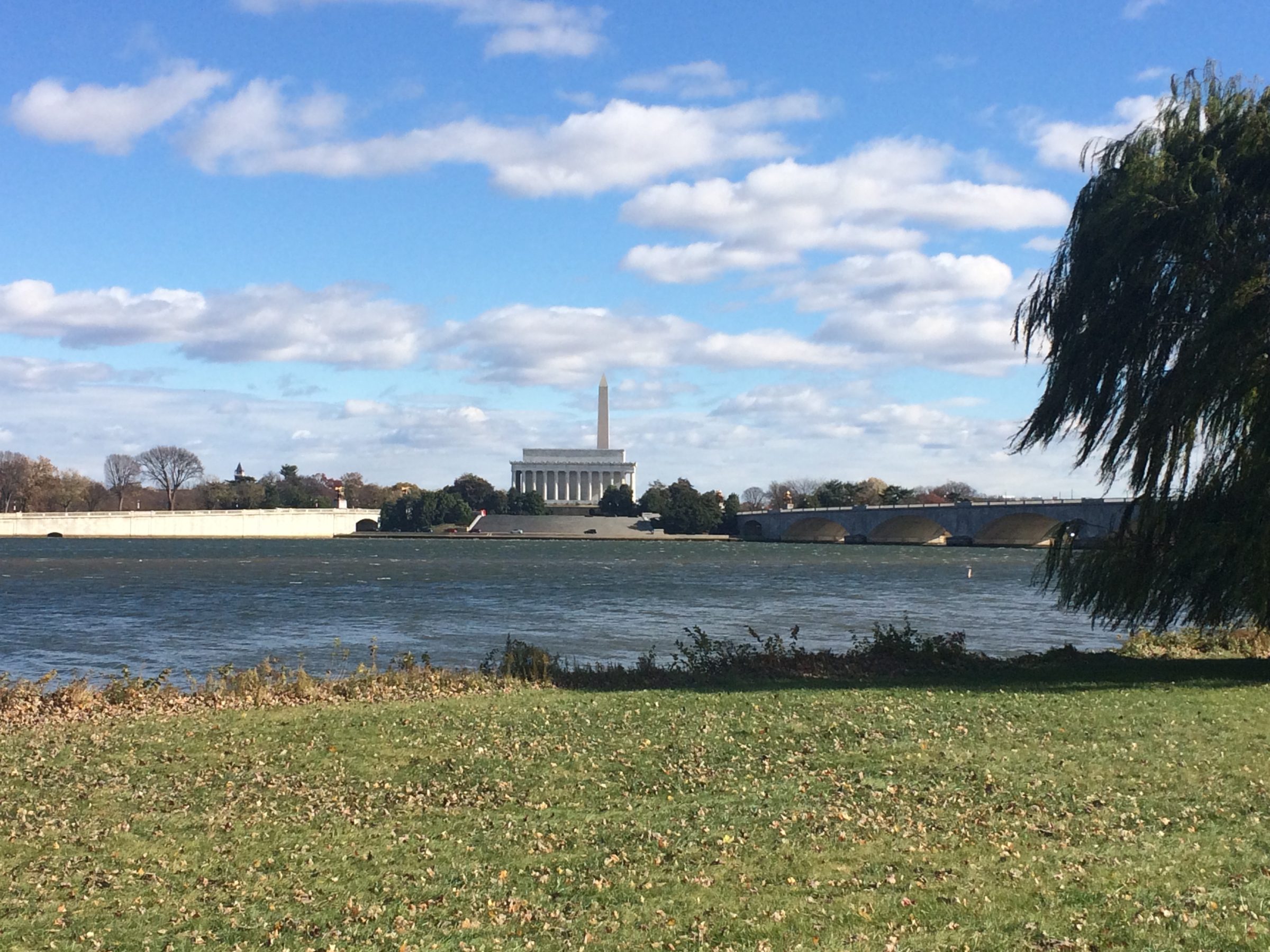 In just a few days in June 2006, heavy rain put too much pressure on the city’s sewer system, causing major flooding in the Federal Triangle area. The water forced several Smithsonian museums to temporarily close, flooded two metro stations, and caused millions of dollars in damages.

The June 2006 floods are examples of severe weather events included in the new Climate Ready DC Plan. The plan, released Nov. 15 by the District Department of Energy and Environment (DOEE), outlines how climate change will affect D.C. and lists 77 steps to make the city more adaptable to changes in the environment.

Developing the plan was a multi-step process lasting around two-and-a-half years. “We worked with a really renowned climate and atmospheric scientist, Katharine Hayhoe,” said Maribeth DeLorenzo, deputy director of the Urban Sustainability Administration at the DOEE. “We first looked at what was the climate science and how do we downscale it to look specifically at how climate science would impact Washington.”

The European Commision on Climate Change reports that under current conditions, the average global temperature will increase at least 2°C, and according to the plan, the resulting environmental changes will lead to an increase in the number of days of extreme heat in the city. Historically, the average high temperature during the summer was 87°F, but the plan predicts that by 2080s, the high will be between 93°F and 97°F.

The plan also states that there will be an increased likelihood of flooding caused by changes in precipitation patterns, with rainfall staying constant but more likely to be concentrated in the fall and summer. Rising sea levels will also cause water levels to rise in the Anacostia and Potomac rivers.

“Then we moved to the second phase which was an exercise in terms of thinking about vulnerable infrastructure, vulnerable populations, vulnerable neighborhoods,” DeLorenzo said, and from this set of information, the DOEE developed a list of steps needed in order to help the city adapt to climate change.

The plan details how these environmental changes put both the city’s infrastructure and its residents in danger. According to the plan, some of the metro’s underground stations have flooded and continue to be at risk of flooding while extreme heat could damage its above-ground tracks. Three of the city’s substations, which provide electrical power to the District, are at risk of flooding, and continued heavy flooding would put severe pressure on the city’s sewer and stormwater runoff systems.

The plan also describes the unequal distribution of the effects of climate change on people throughout the city. “Wards 7 and 8 are most vulnerable given high levels of unemployment, poverty, obesity, and asthma, as well as a large elderly population,” the plan reads.

The plan outlines the steps the city can take to adapt to these environmental changes, which include updates to transportation and utilities systems, updates to buildings for energy efficiency and climate adaptation, and improved emergency preparedness.

As an adaptation plan and not a mitigation plan, Climate Ready DC Plan addresses how to cope with inevitable climate change rather than attempting to curb human impact on the environment to prevent change.

Dagomar Degroot, an assistant professor of history at Georgetown who specializes in environmental history, explained in an email to the Voice that environmental policy consists of both mitigation, which refers to cutting emissions, and adaptation, coping with the changes in the climate. He wrote, “Without mitigation, no amount of adaptation will save many of our present-day cities and societies.”

“For more than a decade, some of the most exciting adaptation work has actually happened at the sub-national level, and particularly at the city level. The Climate Ready DC Plan is part of that effort,” Degroot wrote.

“For a long time, people didn’t view urban areas as having environmental responsibilities, and many of those responsibilities were all through D.C. government in different agencies so it was consolidated into one department, the Department of Environment,” said Tommy Wells, the director of the DDOE. “All of those things in the past were addressed, but were they addressed in a more comprehensive way that you get from housing it all in one department? No. So it’s far more comprehensive now.”

In 2006, the Council of the District of Columbia also passed the Green Building Act of 2006, which established energy efficiency standards initially for public building, then expanded the mandate to publically-financed and lastly private ones.

In 2009, city council passed the Anacostia River Clean Up and Protection Act. The act, which went into effect Jan. 1, 2010, requires stores selling food or alcohol to charge fivecents for plastic and paper bags. The store keeps one cent per five, two if they offer incentives for customers to use their own bags, and the Anacostia River Clean Up and Protection Fund receives the remaining money, which they use for a variety of programs including trash collection, water restoration, and educational outreach. According to the DDOE website, there has been a significant reduction in the use of plastic and paper bags since the law went into effect.

The mayor’s office has also been involved in environmental policy. In 2012, it released the Sustainable DC Plan. This plan takes a broad approach to sustainability, addressing a variety of topics from climate and environmental policy to jobs and the economy and to diversity with the stated goal of “making DC more socially equitable, environmentally responsive, and economically prosperous.”

The Sustainable DC Plan also called for studies about climate adaptation. The District Department of Transportation released such a study in 2013 with its Climate Adaptation Survey, and the Climate Ready DC Plan is the DOEE’s response.

“Sustainable DC Plan is the overarching plan for the work of urban sustainability administration, but also the work across the city,” Wells said. “It covers things like sustainable procurement practices to other Department of Transportation’s activities, Department of Government Services that oversees our buildings, it does have a lot, it’s kinda the overall plan that impacts all other plans.”

In addition to releasing the final report of the Climate Ready DC Plan in November of this year, the DDOE released the first draft of its Clean Energy DC Plan in October. The plan, which outlines how the city can meet its goal of reducing emissions 50 percent by 2032, will be in draft form for at least a year to allow for public comment, and Wells hoped that the Clean Energy DC Plan will serve as a model for other developed cities.

As with the Clean Energy DC Plan, there are many ways in which D.C. is a leader in environmental policy. According to Wells, the city leads the country in the number of energystar buildings and green roofs. “I think Washington, D.C. is viewed as an international leader,” said Wells, “but we don’t take any comfort in that because we know we have to keep adapting and innovating at a very fast pace.”

Wells and DeLorenzo both said that this adaptation and innovation are not one-sided and that cities have to work together to solve these issues. D.C. is a part of several multi-city initiatives, such as the C40 and the Compact of Mayors, that bring cities across the country and around the world together to work on environmental issues. As part of the Carbon Neutral Cities Alliance, D.C. has committed to cutting emissions 80 percent by 2050, using 2006 levels as a baseline.

“I believe that we do lead, but we know that there’s other cities that are doing things that we want to learn about and that we’re excited about so we established a partnership between the Department of Environment with Copenhagen,” Wells said. The DOEE hopes to learn about cloudburst management from Copenhagen while Copenhagen is learning from D.C.’s resiliency plans.

Another area in which D.C. looks toward other cities for guidance is in its transportation policy. “We’re all having ridesharing, ride-hailing, driverless cars, this is an area, a sector, where there’s huge innovation happening,” said DeLorenzo. “I think we’re all trying to figure out what does that look like for sustainability because as much as it’s wonderful and convenient to have Uber and Lyft, some of the early research is showing that that’s resulting in more vehicle miles traveled.”

Some environmental groups are concerned that a Trump presidency may put recent environmental progress in danger. The President-elect tweeted in 2012, “The concept of global warming was created by and for the Chinese in order to make U.S. manufacturing non-competitive.”

Additionally, his campaign platform contained several points that many environmental activists find worrisome, such as leasing federal lands on and off-shore for coal and encouraging the use of shale, natural gas, oil, and coal.

Besides the rhetoric and campaign promises, his actions since the election have worried many people concerned about the future of the environment. Students for Climate Security organized a Nov. 17 protest in which around 100 students marched from campus to the office of Myron Ebell, director of Energy and the Environment at the Competitive Enterprise Institute (CEI) which, according to the New York Times, is partially funded by the fossil fuel industry. Ebell is Trump’s appointment to head the transition team at the EPA. The Times has also reported that Ebell challenges scientific research around anthropogenic climate change.

“I think the next four years certainly promise to be very challenging for environmental protection, particularly if Trump’s campaign promises and his initial appointments and advisers are an indication of his policies to come,” said Sara Colangelo (LAW ’07), adjunct professor at the Georgetown Law Center and director of its Environmental Law and Policy program.

Colangelo thinks some actions that a Trump presidency may take regarding environmental policy include rollbacks of some environmental protections like the Clean Power Plan and Waters of the United States Rule, a loosening of restrictions surrounding average fuel economy in cars and trucks, and a serious defunding of environmental and scientific government agencies. Additionally, she said that Trump may also pull out of the Paris Agreement or refuse to follow through with some of the commitments under the agreement such as sending aid to developing countries.

In addition to broad changes in environmental policy at the federal level, a Trump presidency could negatively impact how more local forms of government, like D.C., conduct environmental policy. “The worst case scenario from a state perspective would be the use of Trump administration power, especially in concert with Republican-controlled House and Senate, to preempt or prohibit state-based regulation or enforcement of environmental policy and regulation,” Colangelo said.

However, the Constitution’s guarantee of federalism often does protect cities like D.C. from federal intervention in local policy. “The states, and in particular localities, do have some insulation from what happens at the federal level and that’s just a function of the Constitution…and the concept of federalism,” Colangelo said. “There are powers that are traditionally reserved to the states and localities, a good example would be land-use planning or control over infrastructure design, that will always leave room for state innovation and action on climate issues and a host of other environmental initiatives, again at that state-based or local level.”

Speaking of D.C.’s commitment to its residents with regard to climate issues, Wells said, “I can’t imagine serving the residents of D.C. and backing off of our progress and commitment on all the fronts that we’re working on. I suspect we’ll continue to be a leader nationally and internationally, but I also suspect that we’ll be doing it without a federal partner or as much federal partnership, but again, that remains to be seen.

Correction: Professor Colangelo’s comments have been edited to reflect corrections she sent in an email to the Voice before publication. 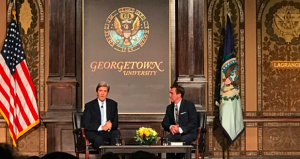