The Georgetown women’s soccer team (20-3-3, 6-1-2 Big East) made history in 2016. After a 2015 that ended in a disappointing exit from both the Big East Tournament and NCAA Tournament on penalties, the team returned six starters from 2015, along with a seventh former starter who regularly came off the bench, graduate student forward Crystal Thomas. Three months after a disappointing start to the season, the Hoyas were playing in their first College Cup at Avaya Stadium in San Jose against eventual National Champion Southern California (19-4-2, 8-2-1 Pac-12). The season became something of a fairytale story, capped with the Hoyas’ first Big East Tournament victory in program history, won in front of a home crowd at Georgetown’s very own Shaw Field.

A 3-0 loss to Stanford in the second game of the year did nothing to shake the Hoyas’ confidence, and less than two weeks later, the team grabbed a 2-1 overtime win in Piscataway, New Jersey against then-No. 12 Rutgers (12-5-6, 4-2-5 Big 10) behind two goals from junior midfielder Rachel Corboz, the 2015 Big East Midfielder of the Year. Nine days later, the Hoyas downed then-No. 3 Virginia (15-2-2, 6-2-2 ACC) in a come from behind, 3-2 thriller at home. As if that wasn’t enough, Georgetown went on the road and handed then-No. 2 West Virginia (23-2-2, 8-0 Big 12) its first loss after a 1-0 win in double overtime a week later. The Mountaineers would not lose another game until the national championship game against USC.

Nolan also emphasized the importance of these out of conference games for the team’s Rating Percentage Index (RPI) ranking, a measure of strength of schedule, guaranteeing more home games for the NCAA Tournament.

“Dave always stresses having good out of conference play, and I think he did a good job scheduling these tough games because they really help us in the RPIs and later on getting a bid to the NCAA [Tournament],” Corboz said. “I think it’s really helpful that we play those tough games.”

A large part of Georgetown’s success throughout the year came from its dominant defense. Graduate student defender Marina Paul returned from an ACL injury to lead the Hoyas’ defensive group. Fellow graduate student Corey Delaney, who previously played at Dartmouth, and juniors Drew Topor and Elizabeth Wenger rounded out the starting back four. Along with sophomore goalkeeper Arielle Schechtman, a transfer from UCLA, the team’s defensive unit allowed only 15 goals on the year. The team conceded multiple goals only three times this season, against Stanford (3), DePaul (4), and Virginia (2). The Hoyas also recorded 17 shutouts in their 26 games, a vast improvement from five in 2015. 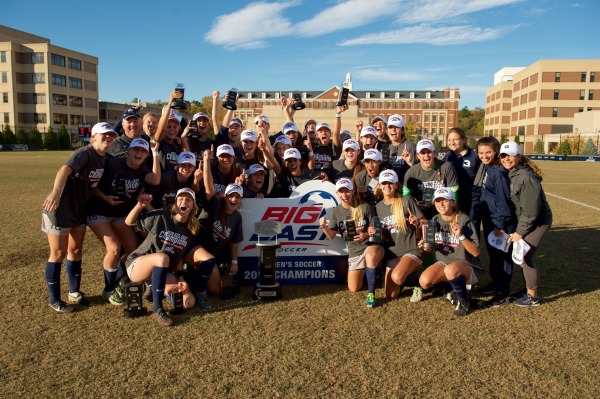 While only four starting players are nominally listed as “defender,” Nolan considers defending as a responsibility of all eleven players on the field.

“Defending for me is always a mentality, and it starts up front,” Nolan said. “If your forwards and your midfielders aren’t willing to work hard to defend, it puts a lot of pressure on your back four.”

Defending from the front was a trademark for the Hoyas all season long, and the team looked more fluid playing together than in 2015, turning defense into attack seamlessly to keep the pressure on the opposing team.

“I just saw this sort of cohesiveness that I have never seen with a Georgetown team before,” Paul added. “We’re all on the same page; we all have the same goals; we all genuinely want to play for each other.”

This cohesiveness led to seamless transitions from defense to offense. Senior forward Grace Damaska and Crystal Thomas led the attack with their experience, while sophomore forward Caitlin Farrell and redshirt freshman forward Amanda Carolan added an extra spark to a front line that had no players with double digit goals in 2015. Corboz anchored the midfield, with fellow juniors Taylor Pak and Chloe Knott controlling the tempo of the game. In all, the Hoyas outscored their opponents 61-15 in 2016, improving drastically from the 44-25 margin from the year before.

The Hoyas’ attack was defined by several different types of players. From Farrell’s speed and strength down the right wing to Thomas’ quick feet crafting chances in tight spaces, the diversity of players’ strengths kept Georgetown unpredictable and opposing defenses on their heels.

“It wasn’t always the same type of goal,” Nolan said. “It was a set piece, it was a build up, it was a cross, it was a shot; we could score goals in a variety of ways.”

Big East play witnessed the Hoyas playing at their best and worst. They dominated most of their conference opponents, highlighted by 5-0 and 5-1 wins against Butler (11-7-2, 4-4-1 Big East) and Villanova (4-14, 2-7 Big East), respectively, and a 4-0 win at Seton Hall (5-11-1, 1-8 Big East). The Hoyas also suffered the team’s most crushing loss of the campaign during conference play, a 4-1 defeat at home against DePaul (10-6-3, 7-2 Big East) on Oct. 23. Four first half shots for the Blue Demons translated into four first half goals, and the Hoyas never recovered.

“I think that that game wasn’t really a testament to our whole season,” Paul said. “It was just a matter of every day in practice denying goals as much as possible and then translating that into the game.”

The Hoyas did well to deny goals moving forward, allowing only two over the remainder of the season. The team immediately rebounded with a 3-0 win at Creighton (9-6-2, 4-5 Big East) to secure the third seed in the Big East Tournament hosted at Shaw Field.

The Hoyas handily dealt with Butler 4-0 in the quarterfinals before going to penalty kicks after a 1-1 stalemate with DePaul, the same team that had trounced them 10 days earlier. Unlike the shootout failures that plagued the team in 2015, Georgetown was perfect from the spot and propelled themselves into the Big East Championship against Marquette (12-8-2, 7-2 Big East). A 2-0 final score does not tell the story of a game that the Hoyas controlled from start to finish to finally hoist their first Big East trophy. Following this impressive victory, the Hoyas earned a two-seed for the NCAA Tournament.

The Hoyas began their tournament run with a 2-0 victory over St. Francis (Pa.) (10-12, 6-2 Northeast) before winning rematches against Rutgers and three-seed Virginia by the same score. They outperformed their 2010 Elite Eight run, the program’s previous tournament best, with a 1-0 win over Santa Clara (12-7-4, 6-2-1 West Coast), clinching their first ever trip to the College Cup in front of a joyous home crowd.

Despite the 1-0 loss to two-seed USC in the national semifinal, the university welcomed the team home with a victory rally on Monday, Dec. 5, a gesture that both coach and players appreciated.

“I thought it was a beautiful gesture,” Nolan said. “I think that particular event was a nice way for them [the players] to kind of see, ‘Wow, other people think what we did was pretty cool, so maybe it’s time we start thinking that it’s pretty cool too.’”

“We haven’t really had that in the past, and it’s nice to know that our fellow classmates and the university are behind us through it all,” Corboz added.

Paul earned third-team all-American honors for her performances throughout the season, as well as Big East Championship Most Outstanding Defensive Player and all-Big East first team awards. Wenger and Schechtman made the all-Big East second team.

Offensively, Damaska led the team with 14 goals, Corboz and Thomas tallied 11 each, and Carolan added 10. Hermann Trophy semifinalist Corboz also led the nation in assists with 16 and was named to the first-team all-American and all-Big East squads. Damaska won the Big East Championship Most Outstanding Offensive Player and joined Corboz and Paul in the all-Big East first team. Thomas joined Wenger and Schechtman in the all-Big East second team, while Carolan earned Big East Freshman of the Year and a spot on the Big East all-freshman team. Nolan and the coaching staff, meanwhile, were voted National Coaching staff of the Year.

Unlike past seasons, when the 2017 season arrives, this Georgetown team won’t catch anyone by surprise, but instead will have a target on its back.

“I think our mentality is going to be the same,” Corboz said. “Just work super hard and train a lot and try to have a better season next year.”

“This team was brave enough to set itself up for a lofty goal. A lot of teams won’t aim that high because they don’t want to risk falling short, and this group was willing to put its neck on the line and say, ‘This is what we want to do, and we’re going to go for it,’” Nolan explained. “And I challenged them, I said, ‘Now the question becomes do you want to go for it again?’”

It would be a mistake to assume, however, that this program is an overnight sensation. Nolan has been at the helm for 13 years and drew attention to the former stars of the program after the Elite Eight victory against Santa Clara.

“People like Ingrid Wells (‘11), people like Daphne [Corboz] (‘14), Emily Menges (‘13), Alexa St. Martin (‘13), all these great players we’ve had come through the program over the years, they’ve got us to this point, not just this particular team,” Nolan said. “All of those kids who came and believed in what we we going to do, they got us to this point.”

Eight starters will return for next season to try to push the Hoyas further in the NCAA Tournament, along with younger players such as freshman forward Paula Germino-Watnick and freshman defender Meaghan Nally. The Hoyas now play under the shadow of daunting expectations, but they also benefit from invaluable experience.

Should the Hoyas carry on their winning ways despite the wealth of talent that is due to graduate over the next couple of years, 2016 could be the start of a long-term powerhouse. 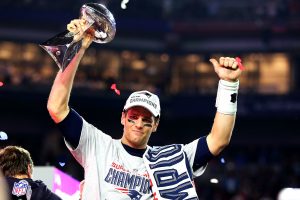