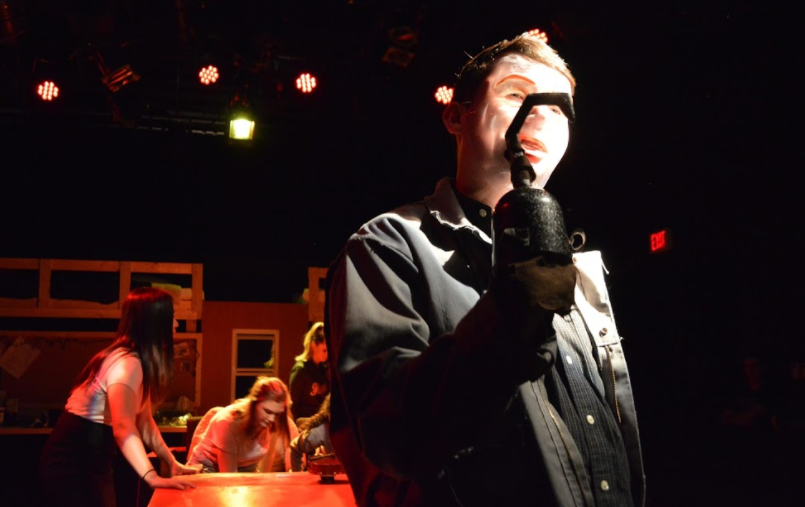 By spilling forth everything meant to be contained in the fragile receptacles of human bodies—blood, guts, brains, you name it—the slasher genre appeals to the perverse in people. Hookman, the latest production by the Black Theatre Ensemble, does just that, but with a culturally conscious twist. Written by Lauren Yee, Hookman sheds more than blood onto the Village C stage: it unleashes the terrors of a young girl’s mind.

The play begins with an eruption of “Lose My Breath” by Destiny’s Child from a car stereo. Lexi (Carmen Livesay [COL ’17]) and Jess (KC Pietro [COL ’19]) drive distractedly to the movies, reunited during the first break of their freshman year. Fistfuls of In-N-Out fries wander off course from Jess’s mouth and drop to the floor, while a substance which may or may not be ketchup stains her shirt and seat. Jess stayed local for college, but Lexi decided to go to Georgetown, and this geographical riff has had an evident effect on their friendship. This scene, animated by fast food and early 2000’s pop, is revisited throughout the duration of the play. Each time the cast brings Lexi’s bright-red car back on stage, it signals that crucial information is about to surface.

While the interactions between Lexi and Jess are complex, loving but tense, Jess’ forthcoming accident is predictable.True to slasher style, the teenage girl is the first to meet an untimely death. It immediately becomes clear, however, that Yee is much too clever to use this trope haphazardly. Her self-awareness unfolds when the play enters the territory of trauma and rape, all while honoring the conventions of horror.

The script is superb—it delicately maneuvers through challenging topics and is cognizant of its collegiate audience. Director Cristina M. Ibarra (COL ’17) even made Georgetown-specific modifications (half of the play is set on campus). References to the Hilltop make the events feel disturbingly familiar and serve as a reminder that even Hoyas are not immune to the mental health issues that Lexi faces everyday.

And in Hookman, Lexi quite literally faces her issues. They take the form of a Michael Myers-type horror known as Hookman. Whenever Hookman appears, she is forced to confront the guilt caused by Jess’ death and the anxiety planted in her by rape. Lexi does not fear because Hookman exists; Hookman exists because she fears. He is the manifestation of her trauma, a projection of her mind. When this realization descends, a question arises: Will Lexi ever escape him?

The state of Lexi’s personal relationships is just as ambiguous. Broken dialogue and misunderstandings fracture intimacy between characters. Whether this lack of social fulfillment is the product of Lexi’s insecurities and mental distress or the permeation of technology, it is unclear. Lexi’s initial reaction to Jess’s death contributes to this alienation, too, but the selflessness she musters towards the end of the play restores hope.

Despite the heavy content, Hookman does not sink into despair. The play has the pace of a thriller and intimacy of a haunted house—the latter thanks to the compact Village C Theatre where the show is in repertory with The Last Days of Judas Iscariot. For this reason, the set is simple, consisting of a dorm room and a movable car. Nonetheless, it suffices for the play’s purpose. Hookman’s sound design, devised by Daniel Wheelock (COL ’19), is thoughtful and effective. Wheelock’s original score adds to the suspense, as does the music placement. The lighting, on the other hand, demonstrates similar vision but suffers in execution. In one somewhat clumsy scene, Lexi’s boyfriend Sean is supposed to be present only on a computer screen, but the effects leave this fact unclear. Besides such occasional confusion, the effects work well to enhance emotion and ensure chills.

The faint of heart will be relieved to know that the blood in Hookman is thinned by hilarity. Hookman himself, played by Mark Camilli (COL ’19), manages to be both a horror and a hoot. Camilli’s portrayal of Hookman is comi-
cal, but in the midst of the plot, his character retains an air of wickedness. Cristin Crowley (MSB ’20) also shines in her role of the annoying girl-next-door, Chloe. Together, Camilli and Crowley allow the audience entrance into the play, breaking the fourth wall in order to tease and taunt viewers.

Ibarra fully understood the limitations of college theatre when choosing Hookman. It is neither overly ambitious nor inaccessible, sure to satisfy even those reluctant theater-goers in the audience. If one is simply looking for a thrill, Hookman will deliver. But if one is up to the greater challenge of engaging the issues the play puts forward, Hookman will be much, much more than the sum of its scares.