Did Georgetown Want Me Back?

The first people I saw as the elevator doors opened and the GERMS staff wheeled my stretcher through my dorm entrance were two acquaintances. “Don’t worry,” I laughed nervously as I was pushed passed their startled faces, “I’ll be back soon.” I didn’t realize that “soon” would be  over a year later.

For those not in the know, MLOA stands for Medical Leave of Absence. It is the official title given by CAPS for time spent away from the university by a student, for reasons of physical or mental illness. It was the latter for me. While leaving, I found navigating the university bureaucracy easy, but I found it extremely difficult during my return. As part of my return process, I was asked by CAPS to reflect on the factors that led me to take a year of leave. The harrowing return process reminded me of how everything else at Georgetown felt before I left. I wondered why it was not simpler, given the number of students I know who take a medical leave, particularly for mental health reasons. I came to the conclusion that the environment Georgetown fosters makes it very easy for students to overload and overwork themselves until they burn out, like I did.

I think if I were to draw any lesson from my time away, it is that Georgetown students put too much pressure on themselves. I know this has become a cliché. That weekend in 2016, when I called GERMS on myself, I was somehow going to work on and finish two group projects, start and complete a final portfolio for a class, write an essay for another, do all my regular homework, edit articles for the Voice, and spend the better part of my Saturday at a tournament for my Frisbee team. If that does not sound insane to you, I think you should heed my words. I am not saying that it is bad to be ambitious or hard working, but the desire to succeed should not come at the cost of your health or personal happiness.

Interacting with students from other universities back home in London helped me put Georgetown’s obsessive work culture into perspective. In the words of my boyfriend, as he stretched out on my bed, ignoring the homework he had left behind at his Canterbury-based university: “People at your university sound crazy, you guys need to relax.”

To be perfectly honest, it is hard for me to recall the process of leaving, though I remember it as being straightforward. It was quick and rushed, and I was tired and confused. I left mid-April 2016, a month before the end of semester. Before leaving I spent a week emailing and meeting with all of my professors, extending deadlines and working out how I would take my exams from home. A few forms were signed, and that was that.

At this point my medical leave was not official, as I was still laboring under the delusion that I would be able to finish my exams before fall semester 2016. I flew home to London and was admitted into a psychiatric hospital as an inpatient. Over weeks of intensive group therapy it quickly became clear that finishing all my exams before the start of the new term would be impossible. In July of that same year, I hurriedly filled out a few more forms, and my MLOA became official.

If leaving was simple, returning was anything but. I spent the larger part of this past summer agonizing over it. CAPS provides MLOA returners with a two page-form detailing the steps they will need to complete in order for their return to be accepted. This form was the tip of the iceberg. A student wishing to return for fall semester cannot initiate that return until June 1. The deadline for all documents to be submitted for a successful return is June 30. Under regular circumstances, a month would seem like ample time. But given the complexity of the CAPS process, and the time it took between emails, it was not.

One problem was that the forms were required to be faxed or mailed to the university. I did not have a fax machine. Being situated in London, I had concerns about mailing such vital documents overseas, and did not see how any of them would arrive on time if they were to be posted. The whole process seemed antiquated. Luckily, when I asked to email everything instead, CAPS responded that I could– a week later. In retrospect, it might have been faster to mail everything.

My primary concern was this: starting my return process in June meant that I had missed deadlines for housing applications and pre-registration. To my dismay, I discovered that CAPS did not deal with such issues, and so it was up to me to chase down the appropriate contacts. I was left to juggle three separate entities: the Dean’s office, CAPS, and the Office of Residential Living. In order to sort out my housing alone, I had to pass through four different people, which made for a very confusing chain of emails. To make matters worse, my Dean was powerless to register me for any classes until he got the all clear from CAPS. It was mid-July before I was actually registered for any classes. Ultimately, I was lucky. The classes that still had space met my requirements and appealed to me, so I ended up with a nicely organized schedule (no 8 a.m.). My grandparents live 10 minutes from campus, so I was able to obtain a housing exemption and live with them.

Returning from a MLOA is strange. How could it not be after a year away? The first day of class was one of the most intimidating days of my life. I left during my sophomore year, and returned as a junior. All my friends are seniors and preparing for their lives post-graduation. Most of the faces I knew are gone and have been replaced by new ones. Nothing is quite as jarring as sitting in Sellinger Lounge, as a junior, and not recognizing a soul. The fear that I will end up friendless and alone after my senior friends graduate is very real, not to mention dealing with the host of awkward questions from acquaintances: Where have you been? What did you do this past year? Were you abroad? (I usually just say yes to that one, since that is not technically a lie.)

The university’s process for dealing with MLOAs left a bitter taste in my mouth. I was quite fortunate, but what happens to the students that are not? Students who take an MLOA often do so for mental health issues, which are usually exacerbated by stress. Surely, thrusting them into whatever classes and housing are left is no way to ease their transition back into university life. The process of return itself was so exhausting and time-consuming for me that it felt as though the university did not want me back. It was like I was being tested, to see if I would snap, so that they could be sure I was really deserving of my return. 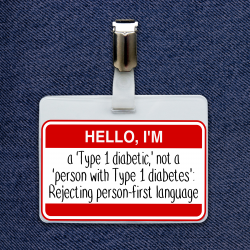 I’m a ‘Type 1 diabetic,’ not a ‘person with type one diabetes’: Rejecting person-first language