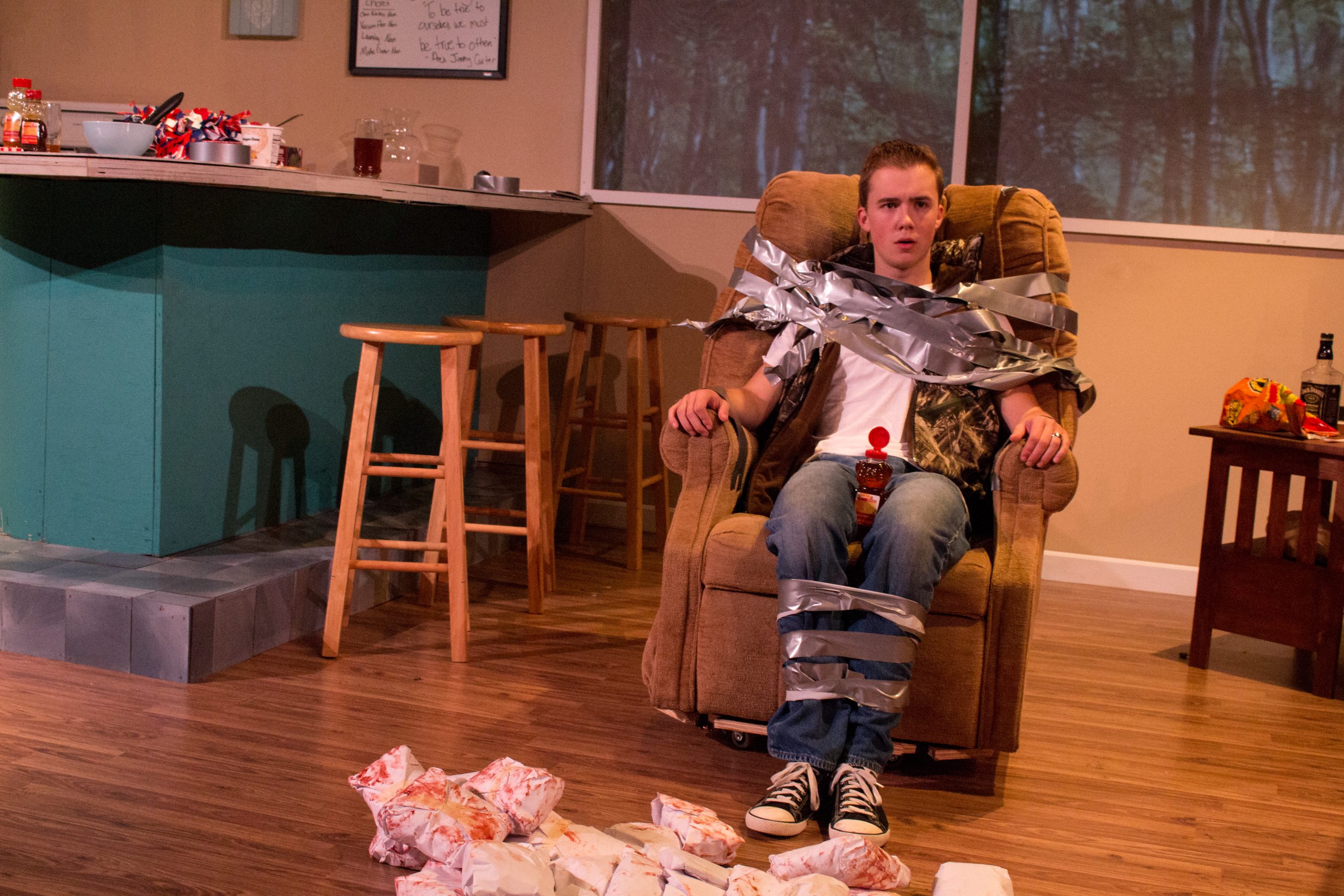 A figure struggles against the duct tape that binds him to a sofa-chair. A stripper and a man dressed as a cheerleader console a conflicted woman. The floor is littered with piles of deer meat. The trapped man is sticky with honey. And oh, at the end, someone’s crotch gets lit on fire.

Contrary to the the implications of the above description, Exit, Pursued by A Bear, presented by Georgetown’s Nomadic Theater from Oct. 19 to Oct. 28, is not nearly as strange as one might expect. In fact, the premise is fairly simple and the script is modern — almost jarringly so. The real eccentricity of the play lies in its attempt to address themes of domestic violence and abuse while remaining a “revenge comedy.”

While this is a delicate and bizarre balance to strike, the Nomadic Theatre does an impressive job. The script, written by award-winning playwright Lauren Gunderson in 2012, illustrates the story of Nan Carter (Allison Lane, COL ‘19), a docile wife who decides to leave her abusive husband Kyle (Jake Sanford, COL ‘20) and take destiny into her own hands. Kyle is somewhat of a dead-beat: a drinker, a hunter (without a license), and a belligerent. He both physically and emotionally abuses Nan. Nan’s support system takes the form of Sweetheart (Kylie Navarro, COL ‘20), a stripper and aspiring actress whose exaggerated and exuberant behavior serves as comic relief during the play’s tensest moments. Simon (Mark Camilli, COL ‘19), Nan’s gay best friend, is at times even more humorous than Sweetheart. His first entrance is unforgettable, as he bursts onto the scene in his Gators cheerleader outfit — complete with pompoms and a skirt. Although a supporting character, Simon steals the show with his witty dialogue and snarky comments.

Nan’s plan is straightforward. She binds Kyle to a chair and stages a play recounting the incidents of their relationship, especially the abusive ones. Sweetheart enthusiastically portrays Kyle, and Nan and Simon play themselves. A struggling Kyle, constrained to his chair, watches helplessly, begging Nan to remember their early days together and promising to change. Before Nan, Sweetheart, and Simon abandon Kyle and leave for Atlanta, they drizzle him with honey, scatter deer meat around him, and leave the front door open — baiting him for a black bear. Nan is sympathetic enough to leave Kyle a phone to call 911. We see her later as a successful author on Anderson Cooper 360, discussing a book about her experience with domestic violence.

The performances by the lead actors of the Nomadic Theatre are quite remarkable. Lane simultaneously portrays the strength and resolve of a woman who is determined to regain control over her life and the frailty and indecision of a wife who is leaving her husband. The role of Kyle is undoubtedly a difficult one; we don’t hear much dialogue from him as he is either unconscious or struggling mutely through many of the scenes. In the flashbacks to the earlier days in Nan and Kyle’s relationship, however, Sanford is able to give us a glimpse of the softer sides of his character, briefly causing the audience to develop conflicting feelings about Kyle’s true nature. Navarro and Camilli commit fully and earnestly to their performances of Sweetheart and Simon, fulfilling their roles as Nan’s support system and the play’s chief supply of comic relief.

At no point during the performance, however, did the humor eclipse the gravity of the situation. The seriousness of Kyle’s actions were never lost in the well-meaning and humorous banter of Sweetheart and Simon as the actors prepared for their monologues in the play within the actual play. For producer Cristin Crowley (MSB ‘20), the major challenge that she and director Bailey Premeaux (COL ‘19) faced was “walking the fine line between providing entertainment and discussing a sensitive topic.” Ultimately, they succeeded in achieving a conscious symmetry of the two.

For a performance in such a small and intimate space like the Village C Theatre, Nomadic’s version of Exit, Pursued by a Bear had a surprisingly engaging and diverse visual experience. Throughout the entire show, stage directions were integrated into the scenes from a series of projectors aimed at a screen above the actors. The set, though relatively modest in size and composition, reflected the modernity of Gunderson’s script (with small details like a bag Flamin’ Hot Cheetos) and complemented the rugged ambience of Nan and Kyle’s home.

If there are any issues to be had with Exit, Pursued by a Bear, they should be found in the content of Lauren Gunderson’s script. The characters of Sweetheart and Simon, though humorous, are often one dimensional. Although the focus of the play is on Nan, there is a lack of depth to her two supporters that is quite noticeable to even the most casual viewer. Kyle is a slightly more nuanced individual, but his periods of violence and superficial remorse are very typical of the theatrical depiction of an abuser. We do catch a glimpse of the gentler aspects of his personality, but he is also more or less one-sided. And while Nan’s experience in finding her strength and calling is very impressive, the concluding scene in which she is on Anderson Cooper clashes with the style and atmosphere of the rest of the play.

Exit, Pursued By a Bear may attempt to reconcile two very strange elements, but the result is not wanting. Whatever faults can be found in Lauren Gunderson’s script do not overshadow the impressive performances of the four lead actors and the careful deliberation of the directorial staff. In Exit, Pursued by a Bear, The Nomadic Theatre is able to provide a clever, passionate, and entertaining performance that still grapples with the dark themes of domestic violence.