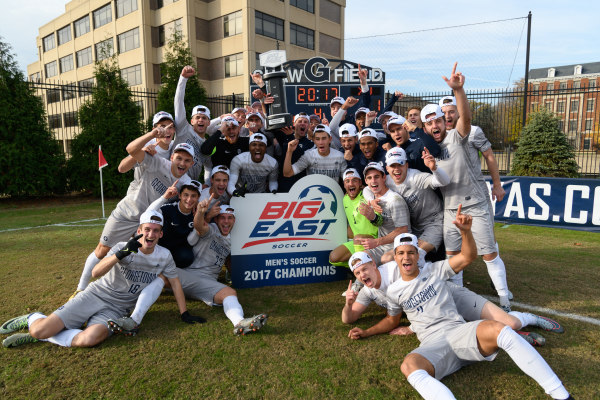 For the second time in three years, the Georgetown men’s soccer team (14-3-2) claimed the Big East Championship in a double-overtime thriller over Xavier (11-6-3), 2-1. Georgetown was led by senior midfielder/forward Declan McCabe, who netted the game-winning free kick in the 107th minute and assisted on freshman forward Derek Dodson’s 62nd minute goal, while Xavier’s lone goal came on a penalty-kick by senior forward Matt Vasquenza. With the win, the Blue & Gray secured the conference’s automatic bid to the NCAA Tournament.

“It feels incredible. It just goes to show how far this program has gone,” senior midfielder and team captain Christopher Lema said.

From the opening whistle, the game was evenly contested. Xavier created perhaps their most dangerous opportunity of the game in the third minute on a low cross, which resulted in an open shot on goal by sophomore midfielder Payton Miller. Georgetown’s sophomore defender Dylan Nealis rescued the beaten defense by clearing the ball off the line, much to the dismay of the visiting Musketeers.

From there, the first 20 minutes saw both teams playing aggressive defense, causing problems for both offenses. Georgetown maintained a majority of possession, but the Xavier back line did an excellent job of preventing open shots or crossing opportunities. Sophomore forward Achara attempted to use his pace in behind the defense, but senior defender Cory Brown and redshirt freshman defender Samuel Buzzas stifled many of his runs, resulting in frequent goal kicks for the Musketeers. Freshman midfielder Jacob Montes and senior forward Zach Knudson asked questions of the back four in the middle of the pitch, but the Hoyas were never able to complete the final pass needed to present a dangerous chance.

“When you get a team that’s as well organized and talented as Xavier, you’re going to have to find ways to manufacture [opportunities],” Georgetown head coach Brian Wiese said. “You just gotta be patient. It can come a lot of different ways. But there weren’t that many chances for us in transition, which makes it hard.” 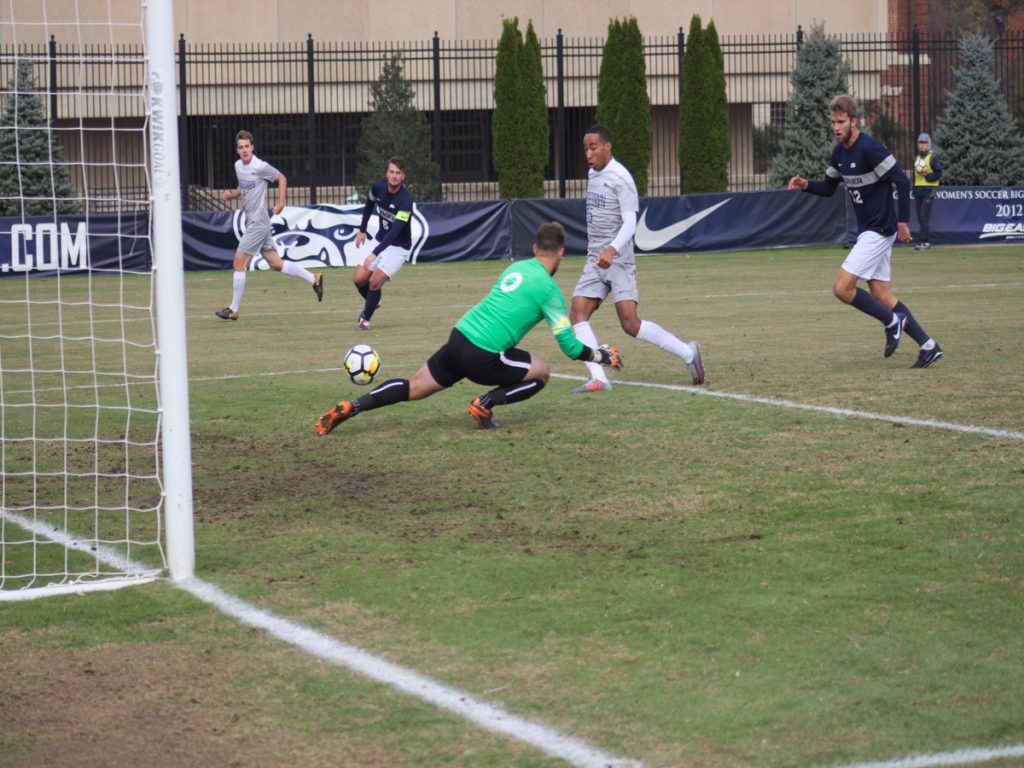 Dodson pokes the ball past Hanley to tie the game at 1-1. (Tyler Pearre/The Georgetown Voice)

In the second half, both offenses were more dangerous. Just two and a half minutes into the half, Montes had his shot from the top of the box blocked, and Xavier immediately countered. The ball was played down the left sideline, before being played into the box. Junior midfielder Simen Hestnes rifled a shot from just beyond the penalty spot, which drilled the crossbar. Musketeer players appealed to the assistant referee, pleading that the ball had crossed the goalline. While the referee did not award a goal, he did grant Xavier a penalty kick for a blatant hand ball committed by Georgetown freshman midfielder/defender Foster McCune. Vasquenza calmly stepped to the spot and netted his attempt into the right side of the net, just beyond Marcinkowski’s outstretched arms.

If the Hoyas were shaken by the goal, they didn’t show it. The offense remained aggressive and dominated possession with Lema, Knudson, and junior midfielder/forward Ethan Lochner winning the ball repeatedly in the midfield. The Hoyas created several chances just before the 60th minute, but weren’t able to direct their shots on frame. The team found its equalizer, however, after Hanley botched a goal kick directly to McCabe. The senior drove the ball down the right side of the field and played a low cross to the near post, where Dodson poked it past Hanley.

“The keeper had a really tough goal kick that went right to me… I think the whole team recognized the opportunity we had. Just a quick one-two with Montes and we were in on goal and Dodson tucked it away,” McCabe said.

“One thing that we harp on is that when we go down a goal, we always just tell ourselves we have to score to win it anyways,” Lema said. “Nothing changes, you’re still trying to get that one goal to win. You don’t tie a championship game; you have to win it. So we just kept pushing, we got the goal and luckily the team kept playing well.”

McCabe nearly won the game with a goal of his own in the 81st minute. After Achara was played down the right side of the field, he cut back inside and shot low to the far post. McCabe redirected the attempt just in front of the keeper for a goal, but was whistled for offside.

“I definitely felt like I was onside. The coaches were joking with me, saying that I got duped,” McCabe said.

“Declan was beside himself because he was adamant that he was [onside]. I just told him, ‘well, it gives you the opportunity to do it again,’” Wiese said.

After 90 minutes of play, the score was locked at 1-1. In the first overtime, opportunities were scarce for both teams, except for a 95th minute free kick by Vasquenza that hit the crossbar. When the second overtime began, it seemed as though Xavier was content with letting the game go to penalty kicks, as the team frequently took its time to take free kicks and throw ins. Georgetown continued to apply pressure, which resulted in a free kick chance in the 107th minute from the left corner of the box. McCabe and Lema stood over the ball, but it was the right-footed McCabe that curled the attempt home to win the championship. 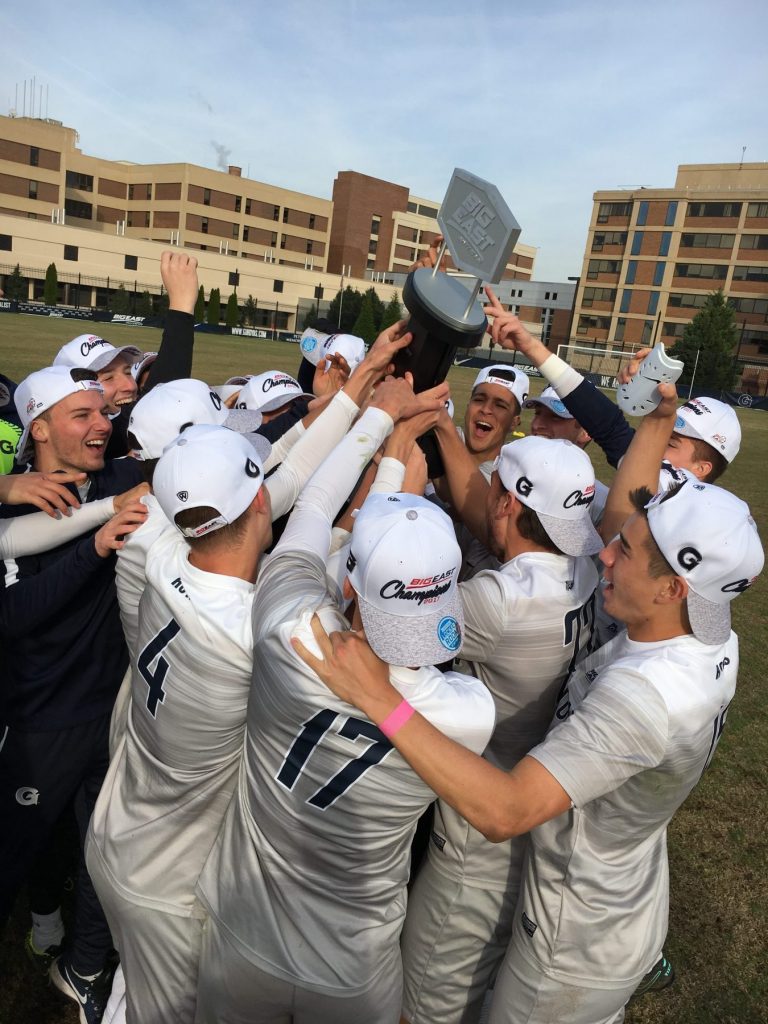 “I mean, I was pretty confident. I had one against St. John’s that hit both posts. So, I knew I could do it. Thankfully, Lema let me take it. Just take advantage of the opportunity,” McCabe said.

“What a fitting goal for winning the league,” Wiese said. “I’m really happy for Declan, that it was him, and it was about as well-placed a free kick as you’re gonna see.”

Georgetown will now wait for the NCAA Tournament selection committee to decide the field on Monday at 1:00 pm. If the team earns one of sixteen possible seeds, they will have home-field advantage through at least their first two games. Regardless of their draw, the Hoyas will look to continue their success into the second half of the postseason.

“I think we have [done enough for home-field]. But, we just take it game by game. If it turns out we don’t get a bye, we’ll just take it like we do any other game,” Lema said.

“We’ve done all we can,” Wiese said when asked about his team’s tournament resumé. “There’s a lot of really good teams in the field this year. I fancy us against anybody. We’re back healthy, I know they consider that… So, I feel pretty good about it… Once they lay it out, that’s what you have in front of you and each game is its own little adventure.”