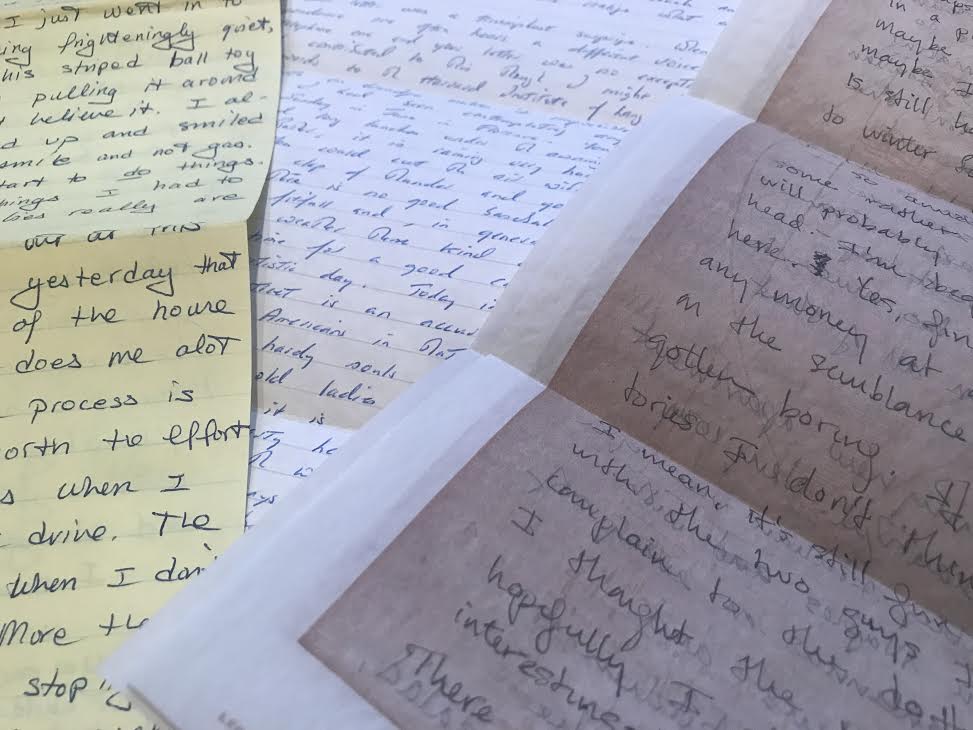 “Wow what a year it has been. Are they all so full of emotions and change? How will we ever accept tranquility?”

I could have written these words from my Aunt Jeannie, found in a letter sent decades ago. In fact, I have written them, many times in my journal, with slight variations over the past year.

Daddygamps, my grandfather for whom “Grandpa” never really fit, died two summers ago. This fall, it finally was time for my mom and her siblings to clean out his house. Coming home this December, I was given my grandma Baba’s sea glass collection and a new dresser that used to sit in Daddygamps’s guest room, along with an envelope of letters. Correspondences from my mom to Baba written on disintegrating onion paper detailing fraught days while living in Florence, words trying to project strength despite thoughts of “What the hell am I doing here?” Neatly typed documents from my Uncle Peter to Daddygamps outlining how he planned to repay his father’s generous loans, projecting a desire to be taken seriously despite the humbling need for help. And notes from my Aunt Jeannie to Baba, whom she saw not as a mother-in-law but as a friend and confidante.

I spent the better part of a morning sitting in the alcove in the back hall of my house immersed in these letters. Occasionally I’d laugh out loud, prompting my mom to yell from her room around the corner, “Now what have you found?”

Yes, reading these letters, reminding my mom of that boy she wrote her mom about, the one who had to go home which was probably for the best because he was spoken for and she was smitten, was hilarious. And finding out about the cute VW Bug she bought, which ended up being a piece of crap, made me question if my bad luck in all things car-related is genetic. But on a more serious note, my mom, aunt, and uncle’s words made me feel less alone.

It was my Aunt Jeannie’s words, asking Baba if life ever got a little less full, maybe even a little boring, that struck me most of all. She wrote them in 1984 in a letter describing the day to day life of being a new mom, the endless rhythm of changing diapers and feeding and crying and soothing, her nervousness to strap her new son into his car seat and drive to Safeway, and how sometimes she couldn’t help but pull over to the side of the road just to climb into the back seat and make sure he was okay.

It’ll likely be at least 10 years until going to Safeway becomes anything more than a peaceful 20-minute walk characterized by my internal debate over how to marinate my chicken breasts, but nevertheless, I identify with my aunt’s words. Wow, what a year it has been. I’ve navigated living across the country from my parents. I’ve begun to narrow down what I might want to do once I leave school. I’ve tentatively given away my heart. And I’ve met friends who I hope will be in my life for a long time. I have a feeling I’ll be thinking what a year it has been as December rolls around in each coming year.

I often thought growing up was only part of childhood and adolescence, but I think I’ve only now stumbled into the real growing up. These letters showed me that I’m not the first one to have the feelings I am experiencing. Reading my mom’s deliberations over whether to stay in Florence or return to real life in New York reminds me of my tumultuous mind each time I’m presented with a question about summer plans and manage to spin it into a life-altering decision. And the image of her sitting at a table writing a letter to her mother, questioning what lies ahead, brings back so vividly the image of me sitting on a plane two Augusts ago heading to Georgetown, completely unsure of what I was getting myself into. My uncle’s letters, written as he made his way through business school and grew into his new role as a father while simultaneously seeking his parents’ guidance, remind me of the internal tug-of-war I go through crafting my own life while reconciling my need for my parents’ help. As he writes about paying off medical bills and buying a new refrigerator, I can’t help but think about my text messages to my parents asking about health insurance and bank accounts, “adult” matters that are now mine to deal with.

Maybe the most compelling part of reading these letters, though, is having the knowledge of what came next. My mom didn’t know that she would find her way, that she would leave Florence, work in New York for a while but eventually end up in Los Angeles and meet my dad and have my sister and me. My uncle didn’t know that he would use his business degree to teach an investments class at my high school when he realized teaching was really where his heart was. My aunt didn’t know that she and my uncle would move back to where she grew up in California and would go on to raise 3 beautiful, healthy children.

They didn’t know what was coming, the joys and disappointments that lay ahead. And neither do I. I don’t know where I’ll build my life, when I’ll meet the person I’ll spend my life with, what work will make my life meaningful, and who will continue to be important to me. But reading these letters from 30 years ago, and knowing that my mom, my aunt, and my uncle have gone through life and are okay, helps me “accept tranquility.” As my aunt wrote these words, I think she was accepting that life will be full of uncertainty but refusing to let this fact get in the way of her faith that everything will turn out okay. Reading these letters made me a bit more sure that I, too, will be able to weather the years of emotions and change to come.