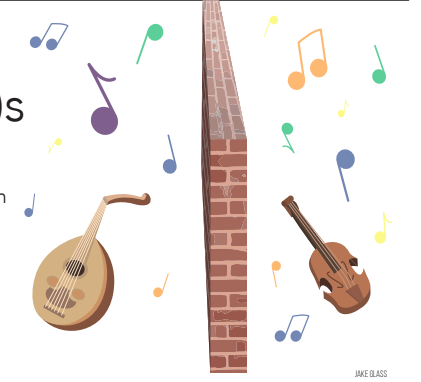 After the election of Donald Trump, Benjamin Harbert, a professor in the Georgetown University music program, began to hear lots of the same questions from his students. They wanted to know how they could become more involved politically, and how they could combine their newfound interest in politics with their passion for music.

“I was at a bit of a loss for telling somebody what to do with that,” Harbert said. He decided to try and bring the people most affected to campus to have their voices heard.

This idea further solidified for Harbert in January 2017, when Trump signed Executive Order 13769, which barred citizens from seven majority Muslim countries – Sudan, Yemen, Iran, Iraq, Somalia, Syria, and Libya – from entering the United States. Harbert now had a specific group in mind and decided to try and bring musicians from countries listed on the travel ban to play at Georgetown. More than a year after the initial ban, that idea has become reality, with a half dozen artists from travel ban countries performing at the university this semester as part of the Friday Music Series.

Organized by Harbert and Professor David Molk, the Friday Music Series is a concert program that takes place every semester on Fridays at 1:15 p.m. in McNeir Hall. A broader theme like the one for this semester is new for the series, which normally features performances from D.C. artists and Georgetown faculty in part because of financial constraints.

Harbert partnered with the Center for Contemporary Arab Studies (CCAS) in order to better recruit and afford musicians from across the country and around the world. CCAS was able to provide additional funding through a Department of Education Title VI grant that supports programming around the Middle East and North Africa.

“We’re hoping that this is just part of bringing awareness to these places and countries and cultures and showing how they aren’t frightening and scary and something to keep away from, but instead there’s something to embrace,” said Rochelle Davis, a professor in CCAS who helped Harbert put together the series.

Many of the artists coming to perform believe the series can bring benefits to the Georgetown community.

“I think that this concert series with the title of the ‘travel ban music series’ is something where we all just have a conversation and I think it brings people together,” said Kamyar Arsani, an Iranian musician based in Washington who performed as part of the series on Feb. 9.

Kareem Roustom, a Syrian-American composer coming to Georgetown on April 20, echoed Arsani. “I think any kind of public performance, if nothing else, it’s a symbol of understanding the other,” Roustom said.

The ideas of unification and understanding were ubiquitous, as Betsayda Machado, a Venezuelan afro-soul musician performing on April 6, wrote to the Voice via her manager. She stated that her concert was an opportunity to, “understand a little more about each other.”

Not all of the artists playing in the Friday Music Series are from travel ban countries. This is partly because during the process of organizing the series, the list of banned countries and the legal status of the ban kept changing. After federal courts blocked the initial travel ban, President Trump issued a new ban on March 6. Then, on Sept. 24, he revised the ban via Presidential Proclamation 9645. Currently, travel is restricted from eight countries: Iran, Yemen, Syria, Somalia, North Korea, Venezuela, Chad, and Libya. Venezuela, North Korea, and Chad were added and Sudan and Iraq removed from the initial ban. The current ban is still facing legal challenges.

Because of the confusion, Harbert and Molk expanded their search to include musicians from nations with which the United States has, as Harbert put it, “awkward relations.” Turkish artist Ozan Aksoy is playing a show on music from Anatolia on April 13, and Palestinian musician Huda Asfour performed with Arsani. Asfour also does biomedical and electrical engineering research at George Washington University, where she received her Ph.D.

Given the broader scope of this semester’s Friday Music Series, Harbert hopes to expand the impact that the program has on campus.

“Somebody who’s reading in the news about whether or not we should block people from Syria coming in should get a chance to experience Kareem Roustom’s contribution to the arts in the United States and are able to hear his negotiation of his Arab and his American identity in his music,” Harbert said. “That’s an intimate experience and that’s a social experience.”

Past performers have visited classes and given lectures, a trend that will continue this semester, with Roustom even staying for a short residency. He will visit Arabic studies and film studies classes – Roustom has scored several movies – as well as talk to the wider Washington community.

The series also provides a space for musicians to do more than just perform during their concerts. Harbert believes a political message becomes stronger when music creates a connection with the audience. He has planned talks by the Friday Music Series performers at the end of their concerts to further expand the public conversation.

“I think [the series] has the benefit of giving a platform for musicians who are forced into having a political awareness so they can speak,” Harbert said. “And we’re trying to create as much of a spoken dialogue after the concerts as we can so that we can discuss issues.”

“It brings all the music that we might not hear as often in D.C.,” Arsani added. He noted that music from other parts of the world is often treated as a once a year experience at a place like the Kennedy Center, when in reality this music exists much closer to home .

“There’s a Palestinian oud player, Iranian daf player. There’s a Syrian singer next door. There’s a flamenco dancer next door. And it might sound very surreal, yet we all live right next to each other,” Arsani said.

Harbert said that the benefits of this semester’s Friday Music Series would not be as strong without the partnership between the music program and CCAS, which allowed many of these prominent, talented, and diverse artists to come to Georgetown.

“What I would like to see happen extend from this is for us to be in dialogue with other departments. I think that our relationship with CCAS has the potential to grow and maybe we could replicate that with other departments, because I think we have such a great audience on campus, and those are the [kinds of musicians] I want to bring in to benefit people in here,” Harbert said.

More than anything else, though, the Friday Music Series is about the music itself. Both the organizers and performers of the series feel that music is a powerful tool in creating cultural empathy and understanding.

“Music is not really a universal language, but I think the act of making music is a universal language. And I think it’s one of those things that very very clearly defines us as humans and as compassionate empathetic creatures,” Roustom said. He and Arsani both expressed their frustrations with the travel ban and the politics behind it but recognized the role music could play in overcoming those challenges.

“Music and art come into place and break the walls that we have imagined between us,” Arsani said.

Machado’s rhythm-heavy, Afro-Latin music may offer a stark contrast to the Middle Eastern and Persian inspirations of the other artists, but the underlying message is the same. “This is what music does, it unites people. When you dance you are not white or black, American or Venezuelan,” she wrote.

If music’s role is indeed as important as these musicians make it out to be, then it makes sense that they want programs like the Friday Music Series, where people can experience new music and connect to the culture behind that music.

Roustom agreed. “I think any step where we’re exposed to the unfamiliar in an environment that’s open and about learning and sharing ideas I think is always a great thing,” he said. “Not only is it a great thing, I think it’s a vital thing. We are putting ourselves in a very dangerous situation when we don’t do that.”

It’s a new and evolving environment for the Friday Music Series. But for Harbert’s inquisitive students, they may now have their answer for how a musical life and a political one can coexist.