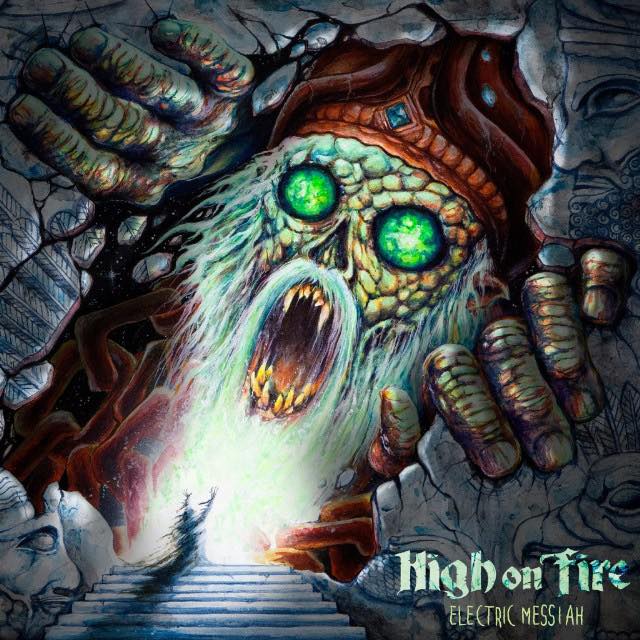 Matt Pike, the guitarist and vocalist for High On Fire, is restless. This power-metal trio was borne out of his need to jam in his garage while his first band, legendary stoner-metal group Sleep, was on hiatus. Since releasing their last album, “Luminiferous,” Pike hasn’t been sleeping well. Lemmy of Motorhead visits him in his dreams; I don’t know what they talk about but it is probably metal as hell. The album is a testament to his insomnia, with some of the fastest 50-minutes of metal released all year. Double kicks churn underneath Pike’s howl, the songs are barely glued together as the breakneck pace threatens to unravel the whole operation. Yet, there’s still enough room for ear-wrestling melodies inside the record’s whirlwind pace.

The album opener, “Spewn From The Earth,” is an apt welcoming to the carnal soundscape. In unison, the trio hammer out a chunky, syncopated hello, before Pike’s throaty snarl soars across the track. Enough cannot be said about the importance of Jeff Matz’s work on the bass; while Pike’s guitar can escape on tangential riffs, Matz provides the thoroughfare for Des Kensel’s involved drumming. The 4-minute track doesn’t overstay its welcome, with just enough time devoted to the central melodic riff, a brief solo-guitar excursion, and a retreading of the riff. However, the beefy, almost drone-like nature of the performance in this song is satisfying in a way that is difficult to pin down.The more in your face the song is, the more atmospheric it becomes.

Following this is an epic journey of a song, “Steps of the Ziggurat/House of Enlil.” The song strays from Pike’s stoner-metal background, and into a more melodic direction, eschewing traditional verse-chorus-verse format into a spiraling descent, led by the drums. Other cuts on the album do well to slow down the pace as well, like “Sanctioned Annihilation.” The vocals on this song are oddly mixed, strangely quiet behind the wall of guitar sound. Aside from that however, the song develops eerily, the guitar plucking in delicately rather than crunching away, and the double-kicks on the drums are pared back to allow the song to breath. This contrast not only makes the moments of quiet more bated and threatening, but make the moments of true volume stand for much more. The guitar solo in this song is not some work of great posturing, it’s moody and purposeful, adding to the space of the song and riding on the established groove.

These forays are interesting detours, but the true weight of the project comes when the group bends to their stupid, animal desires. The songs that sound like a flurry of cymbals, vocal chords, and thunderous bass chords are the ones that rattle away in your head the longest. Songs like “The Pallid Mask” and “God of the Godless,” and “Electric Messiah” scream like lightning tapped into an amplifier. These songs aren’t innovative, nor are they particularly surprising, but they don’t have to be when the whole band is clicking at the clip that they do, each element complimenting the other. Another guitarist would have been too overbearing, another bassist would have fallen further back in the mix, another drummer wouldn’t have explored their full sound pallette at such a high tempo.

I would be remiss not to note the particular joy Pike’s vocal performance gives me. Of course, without the complement of his bandmates, it would be for not, but his ability to convert his far-away screech into a discernible melodic instrument feels like a power drill set on low trying to flambe my ears. On slower songs, he refuses to compromise his delivery, and still manages to fit within the mix of the song. And of course, when necessary, like on “Freebooter,” Pike gleefully howls away and away, a compliment to the electric scream of his guitar. Without attacking the listener, these screams help add to the atmosphere of the project; chugging guitar and hearty screams are a recipe for losing yourself in the heat of the atmosphere.

The final song, “Drowning Dog,” is an appropriate send-off, if sonically dissonant with the rest of the project. It’s much more traditionally metal, including more discernible vocal and guitar riffs; this approach works extraordinarily well for the song, but betrays the more atmospheric and mucky delivery of the rest of the album. This isn’t necessarily a problem, considering other forays into more purposeful usage of time and melody are abound, but it is just an interesting note that this more traditional approach would be how they choose to end the project. The project as a whole rides on a paradox, where the performance is quick but it comes across as syrupy, and the songs are long but they seem to fly by, High On Fire sprint across a tightrope, balancing genre elements, and the result is a breathless riot.