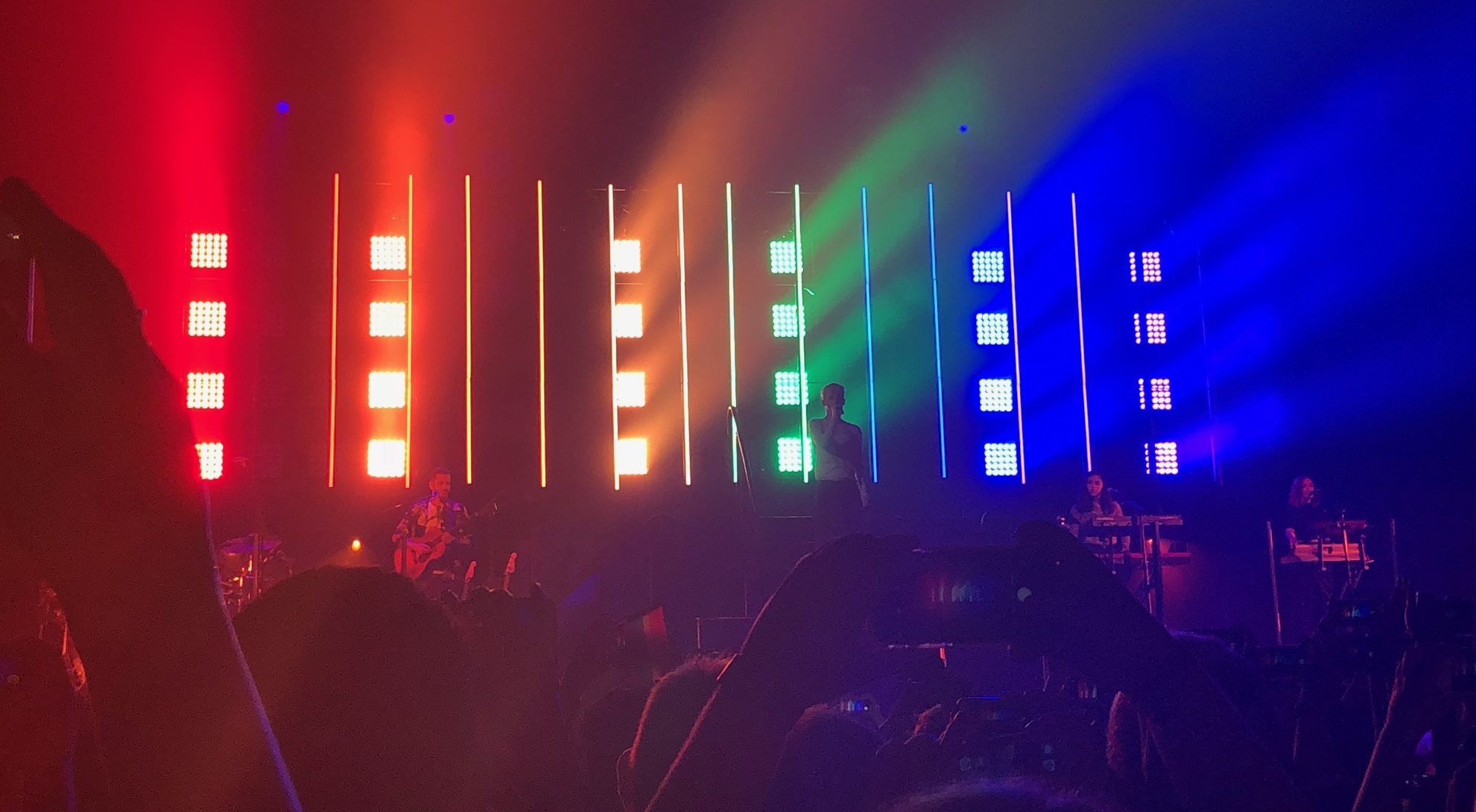 “The lights!” my friend shouted at me, only minutes into the opening act.

“The lights!” she pointed frantically. “They are a rainbow!”

That was something unforgettable in Troye Sivan’s show on Oct. 4 at the Anthem: the rainbow colors of the LGBT pride flag. Hours before the concert, in the crowd of young adults anxiously waiting to enter the venue, the flag was everywhere, in socks, in T-shirts, in pins, in posters, in glitter. Some even wore the flag as a cape. Honestly, it wouldn’t have been the same concert without the rainbow.

The show began with opening act Leland, an American singer-songwriter and friend of Sivan’s. Wearing a rainbow sequin shirt, Leland performed a mixture of his most famous songs, including “Lights” from the movie Sierra Burgess is a Loser (2018), and his upcoming singles, like “Mattress.” The crowd cheered at every dance move and seamlessly learned the lyrics to songs they had never heard before. Following that was the second opening act of the night: German singer-songwriter Kim Petras. Petras, who had some devout fans in the audience, sang her most famous singles, including “Heart to Break.”

After almost two hours between openers and technical setups, Sivan stepped from behind the curtains and began with “Seventeen.” The crowd went wild. Some sang along, while others spent the first minutes simply screaming in excitement in reaction to Sivan’s dramatic appearance, highlighted by a solitary microphone and spotlight. As the curtains dropped to surprise the crowd with the full extent of musicians, staircases, and lights on stage, the screaming intensified. Right from the first song, the tone for the night was set, and the audience was completely hooked in the performance.

Sivan performed “Bloom” and “Plum” before addressing the crowd with a brief monologue about his coming out experience, introducing “Heaven,” by talking about how it dealt with many of his initial fears of what his future would look like and if he’d find love, before he began singing again Many eagerly sang along, only to go back to cheering as Sivan’s figure was highlighted by the rainbow lights behind him. It was by far one of the most raw and unbelievable performances of the night, but without ever losing the feeling that Sivan and the crowd were connected in this experience.

Relatability, after all, is one of Sivan’s trademarks. After performing a mixture of old and new hits like “Fools”, “Lucky Strike”, and “Wild”, the lights were reduced to a couple of spotlights as Sivan sang “Postcards” while sitting on the stairs. He followed by giving another personal introduction for the next song, remarking on how “breakups suck” before singing “The Good Side.” Following that was yet another slower song from his new album, “What a Heavenly Way To Die.” Although this second act of the show was a drastic change in pace, it gave the show a new feel, as Sivan’s voice was accompanied less by electronic beats and more by acoustic instruments. It was simple but beautiful, as many crowd members sang and waved their phones’ flashlights along.

The final third of the show featured ever increasing tempos and excitement. Sivan sang a cover of Post Malone’s “Better Now” and “Bite,” before asking the crowd if they were ready to dance as “Dance to This” played. In fact, every time Sivan shouted, “Ready?”, his question was met with somehow even louder shouts of an audience that never ceased to be invested in his performance.

Sivan was equally invested in the crowd watching him. After noticing that some people in the front had left, he asked if everyone was feeling okay, if they needed water, to make hand signals if they needed help during a song. He opened presents that were thrown at the stage. In a hilarious episode of a phone being thrown at him, he used it to take a selfie with the crowd before returning it. It was these small gestures, things that Sivan didn’t have to do but chose to anyway, that revealed his care and awareness for the fans at the venue.

The show wrapped up with “Youth” and “My My My!” Up to the last lyric, the crowd shouted the words as if they never needed to use their voices again, jumping up and down just as they had done so for the last few hours. It was an epic finale to a show that bloomed with energy from the very start.

Sivan’s Bloom Tour continues on until November, and it’s hard not to recommend. Everything, from the infectious songs to the incredible lights and Sivan’s charisma, made it truly a memorable experience.