A Billboard #1 single. Flawless recreations of 2000s cult classics. Ariana Grande. What more could you ever ask for in a music video?

Ariana Grande finally released a music video on Friday for her chart-topping, surprise single after what felt like weeks of speculation and teasers. Within 24 hours, the video, breaking YouTube and Vevo records, garnered 55 million views. When the video first dropped, there were so many people were on Youtube that the comments could not even load. The video reached 100 million views in under four days.

Millions of people tuned in to watch the music video to one of the best songs of the year—an anthem of triumph, growth, and self-love. The video opens to Mean Girls (2004) confessionals which feature several cameos: YouTuber and Ariana’s longtime friend Colleen Ballinger (aka Miranda Sings), rising pop star and friend Troye Sivan, and the original Aaron Samuels actor Jonathan Bennett, to name a few. Grande has revealed that the instrumental playing during the intro of the video is her upcoming single titled “7 Rings,” a song written after she bought engagement rings from Tiffany’s on a stressful day for her friends.

The song starts with Grande posing as the iconic Regina George. Of course, the equally memorable Burn Book is present as well. Each page is dedicated to an ex-boyfriend of Grande’s, with pictures and playful jokes. She walks down a hall with her three friends Courtney Chipolone, Alexa Luria, and Elizabeth Gillies, whom you may remember was her co-star in 13 and Victorious. Grande’s tee says “A Little Bit NEEDY,” which hints at an upcoming single of which she has already released snippets. The Mean Girls montage comes to an end with the Plastics’ Christmas performance. A highlight of the video is Kris Jenner, who bears a resemblance to Grande’s mother, filming the show and dancing along, Mrs. George-style. The casting idea was nothing short of genius, and hundreds of people went crazy with excitement and shock upon seeing the matriarch of the Kardashian empire’s cameo.

An homage to Bring It On (2000) arrives soon after featuring the toothbrush scene with Matt Bennett, another Victorious co-star. The toothbrushing is interspersed with shots of Grande in a perfect imitation of Torrance’s bedroom. Eagle-eyed fans spotted a poster of Frankie Grande, her brother, on the walls next to a picture of what looks like Ariana in a dress. The Bring It On scenes shift to Grande cheering at a football game alongside and against her friends, including Victoria Monet, Tayla Parx, and Daniella Monet.

Quickly, the 13 Going on 30 (2004) scene appears at the most personal and favorite verse of Grande’s: “One day I’ll walk down the aisle / Holding hands with my mama / I’ll be thanking my dad / Cuz she grew from the drama.” With a visible trail of tears on her face, Grande does the legendary Jennifer Garner role justice as she kneels with a dollhouse, which has rooms exactly like those featured in the video. The characteristic pink wishing glitter of 13 Going on 30 explodes across the screen to feature Grande as Elle Woods, from Legally Blonde (2001), in an appropriately matching, extremely pink ensemble.

Grande pulls up in a shiny black convertible with a license plate that reads “7 RINGS,” another hint at the song. Don’t think Grande and her team forgot any details—her own dog Toulouse plays Bruiser, Elle Woods’s pup. After some shots of Grande relaxing on a chaise in the middle of a college lawn and strolling through a crowd of people, with Toulouse accompanying her, we get another all-star cameo. The one and only Jennifer Coolidge reprises her role as Paulette, the nail salon artist and friend of Elle’s. Grande and Coolidge have a short but comedic dialogue, and then the music picks back up to play alongside Grande exercising in front of an old-school Mac computer and then a revamped bend-and-snap.

The music video mixes the four movies, all of which feature strong female leads finding their own strength and experiencing growth, what Grande exemplifies for many people. This year has definitely not been easy for the singer, who planned to marry Pete Davidson, lost her close friend and ex-boyfriend known as rapper Mac Miller (the very same Malcolm included in the first verse of the song), and broke off the engagement with Davidson. Yet through it all, Grande has projected strength and composure.  She has acknowledged the hard days she experiences, letting fans know that role models never have perfect days. She advocates for mental health and encourages everyone to seek help if they need it. Grande has a close relationship with her fans because she communicates directly with them on social media and talks candidly about her own life. She lets people know the real her.

“Thank u, next” is her most personal single yet; it paves the way for her upcoming album, which she recently discussed with Billboard Magazine as 2018 Woman of the Year. The song marks a new chapter of reconnection with herself and her personal and artistic growth. The song has resonated with millions of people, so it’s no wonder that the music video was highly anticipated. When it finally aired, fans went wild. Each set is perfectly crafted to match that of the movie, and the little details stand out. The video harnesses happiness and empowerment. Within days, the video has broken records, just like the single did. The monumental success of the song and video cement Grande as an icon of 2018. With each listen, people hear Grande’s message of empowerment and appreciation. To Grande, I say a big thank you.

You know I had to do it. 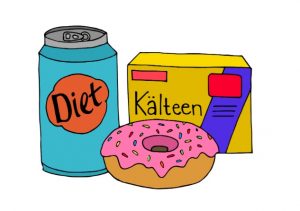