Mary Poppins is back, and she is ready to enchant a new generation of children. After months of Disney-generated anticipation by new and old fans alike, the sequel to one of the most cherished children stories of modern times is upon us, just in time for the holiday season. Beyond the realm of the movie theater one may easily gawk at this not-so-subtle play on audiences’ nostalgia—but once those lights go down and the film starts, it is impossible not to get sucked into the magical and beautiful world of Disney’s London circa 1930, led through the streets by lamplighters and a flying nanny. Armed with the best of Disney’s animators, an all-star cast, and a heartfelt, thoughtful new soundtrack, Mary Poppins Returns is both a delight and a tasteful revamp of the classic story.

The film picks up after the events of the original story with the Banks children, Michael (Ben Whishaw) and Jane (Emily Mortimer), as adults. A newly single father after the death of his wife, Michael relies on Jane’s help with raising his three children, Annabel (Pixie Davies), John (Nathanael Saleh), and Georgie (Joel Dawson). The family is introduced amidst a minor household crisis: the flooding of the kitchen. The hectic morning is suddenly interrupted by a knock at the door by a pair of lawyers, there to inform Mr. Banks that his mortgage payments are late, and that he must now pay back the loan in full. Now in a much bigger crisis, Michael becomes preoccupied with solving the problem, neglecting both his children and his grief in his mission to save the family house. That same afternoon, Mary Poppins triumphantly arrives to mend the family after its loss, amidst their dire financial situation.

Emily Blunt brings a seriousness to Mary Poppins that is a perfect match for the character’s task. The young Bates children have matured beyond their years with the family’s recent loss, and have lost all sense of imagination. Blunt incorporates a warmth into her character’s sternness that breaks their hard exterior, and also feels natural and motherly. Poppins balances the serious with moments of tenderness, particularly in regards to topics such as the children’s mother, and their father’s financial problems. In true Poppins form, she allows some misbehaviors to slide—for example, letting the children confront the bank owner, Mr. Wilkins, on behalf of their dad—but she also has no patience for fussing and arguing. Blunt’s own experiences as a mother likely informed her performance, making Poppins all the more realistic as an effective, motherly figure.

The rest of the cast shines in their own ways, providing for a multitude of interesting characters, each who add a distinct flavor to the film. Lin Manuel-Miranda plays the optimistic Jack, a lamplighter and friend to Mary Poppins, who knows London like the back of his hand. Miranda proves both to be a natural performer in the role, and to have a skill set that extends beyond rapping about the Founding Fathers. His physical comedy chops are especially present in the song “The Cover is Not the Book,” in which he dances with cartoon penguins and raps the details of a nursery rhyme all whilst climbing up a tower of animated books. For the part of Mr. Banks, Whishaw delivers a surprisingly poignant performance as a grieving widower. His character adds a depth to the story as a whole and and to a character who was not originally afforded an arc. Banks’ motivations and mistakes are relatable in this reinterpretation of the original character, making him feel much more three-dimensional and human.

Disney’s animators bring to life the film’s most exciting sequences in such a way that pulls viewers into the experience. During a climax scene, Jack climbs Big Ben to turn back the clock. His ascent up the side of the tower is tense, with the his fellow lamplighters, “leeries,” dangling below him to hand up their ladders one by one. To build the suspense, viewers are shown the view from straight down the side of the tower as Jack teeters on its ledge. The film also impresses during a sequence in which Mary Poppins and the children enter into the cartoon world illustrated on the outside of a porcelain bowl. The effects throughout the scenes are amazing in the most basic sense of the word. At one point, evil cartoon characters take the youngest Banks child, and the other children chase the kidnapers in a carriage down curvy pathways that follow the contours of the bowl. As the roads take them upside down and around, it is impossible to find one’s bearings as a viewer. To those who are prone to motion sickness, this may not be the film’s strongest moment, but otherwise, the scene is a wonder and a feat of special effects that incorporates the viewers into the exciting chase.

Throughout the film, the soundtrack harkens back to the style of the original Mary Poppins, giving the film its nostalgic heart. Standout songs include “Can You Imagine That,” in which Poppins plays to the maturity of her new charges, while also showing them a fantastic imaginary world within their own bathtub. “Trip a Little Light Fantastic” has a similar style to “Supercalifragilisticexpialidocious” in its tempo and go-lucky alliteration. The clear standout musical number, however, was“The Place Where the Lost Things Go,” a somber song in which Mary Poppins sings to help the children come to terms with the loss of their mother. The lyrics are moving and focus on the idea that, when we lose the things that we love, they are not really gone, but are really “playing hide and seek, just behind the moon.”

Mary Poppins Returns is a magical sequel to a film that lives in the hearts of many. Impressively, it manages to both pay its respects to the original and also become its own, including a brand new story and some new characters. It is not without its flaws; the casting of Meryl Streep as Mary Poppins’ sister Topsy, for example, feels like forced compensation for the lack of a Julie Andrews cameo. Further, her sequence proves unnecessary and even clumsy with the silly and forgettable song, “Turning Turtle.” Beyond this, however, the songs are both new and wedded to those of the original film, altogether making for a nostalgic and entertaining soundtrack. On top of it all, the expertise of Blunt and Miranda interweave beautifully with Disney magic to make Mary Poppins Returns both fresh and entertaining. 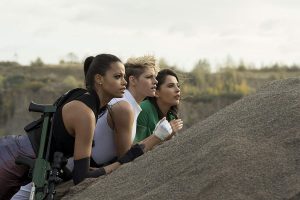 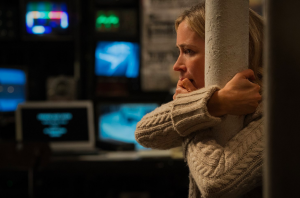 A Quiet Place is a Parent’s Worst Nightmare