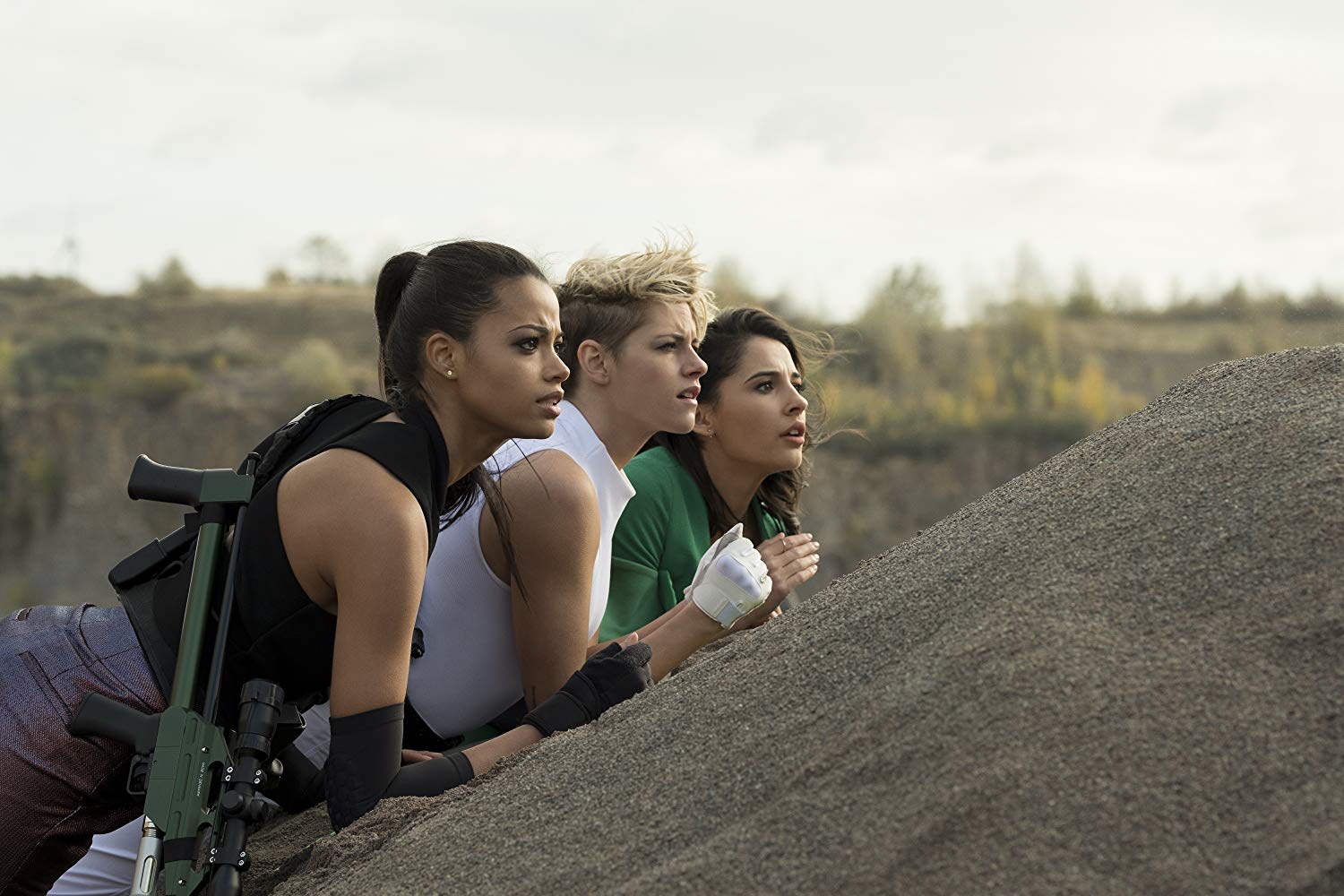 Roman: I hope to all things holy that this movie is set in the same universe as Pitch Perfect (2012), and Elizabeth Banks is playing the same character in each. The soundtrack easily sets up this ideal crossover, and it’s not difficult to see Banks play a day drinking spy who turns into a judgemental and crass a capella judge by night. Give me an end credits scene with Hailee Steinfeld and Anna Kendrick. Who says no? In other news, Naomi Scott continues to be the most successful member of Lemonade Mouth, and seems to be earning the respect she deserves. Speaking of respect, I would have bet against it, but Sir Patrick Stewart, with this (likely phoned in but perfectly fine) performance and lead role in the upcoming Picard series, is aging much more gracefully than Sir Ian McKellen, who’s next appearance is in (shudders) Cats (2020). Finally, I was amused by the casting of To All the Boys I’ve Loved Before (2018) star, Noah Centineo. We get ittttt, he’s hot and charming, but has he ever really proven he can be anything more than your mother’s favorite ex-boyfriend? In terms of plot, I wasn’t blown away, and I assuredly wasn’t convinced that this new cast of Angels could fill the shoes of previous actors. I would like to see more of the plot in future trailers so I will reserve that judgement.

Caroline: Look, this trailer is too loud and too bright. The movie seems to have been cast the same way that the song “Don’t Call Me Angel (Charlie’s Angels)” was produced: How much starpower can we throw together, hype up for a few months, and profit off of while some poor 29 year-old freelancer with Vulture has to decide whether it’s feminist? This high-gloss remake of a remake seems to be more about selling an aesthetic experience—of punchy one-liners and actual punches thrown by flawlessly dressed and made-up spies—than a narrative. The fact that Elizabeth Banks might be Charlie, while refreshing, seems like a surface-level improvement. What I will say, though, is Kristen Stewart? We’re sorry. We gave you a lot of flak for Twilight, but the truth is you’re hot and good at acting. You’ve been killing the indie game with Personal Shopper (2016) and Lizzie (2018), so welcome back.

Annemarie: First off, the trailer is significantly better than the song (not hard, but worth noting). I’ve never seen anything Charlie’s Angels related before and I can’t tell if this trailer thinks I have—either I’m supposed to know the story, or I’m supposed to want to go look up the story immediately because I! Have! Questions! Including if Elizabeth Banks is as fabulous in the movie as she is in this trailer. Also, who is Charlie? I can’t tell you what the main plotline is other than the incorporation of the new girl (Naomi Scott) to the group—is there a villain? Do they just take down a bunch of random men? In general, this seems to be another movie in the trend of an all-star female cast doing bad-ass things while also being wholesome, and even though I’m unclear on what the specifics are, I am here for it.

Roman: I’m just going to say it, the first thing this trailer made me do is want to see El Camino: A Breaking Bad Movie (2019), also starring Aaron Paul, because I am a firm believer that Aaron Paul needs to be in more things (™). The role of a broken, (potentially) wrongfully accused man is perfect for his niche of festering inner rage coinciding with a touch of humanity. This being said, I am a little wary of the plot. After watching the recent Halloween (2018) remake, I realized how profoundly uninteresting I find podcasters to be, and I have never really gotten into true crime forms of entertainment. In today’s world, the true crime market has been oversaturated and overdone and I didn’t see enough in this trailer that sets Truth Be Told apart. That being said, inject Octavia Spencer as a San Francisco journalist straight into my veins. I live for that.  During the trailer, my eye was on Lizzie Caplan as one of the daughters of the victim. She would not have been cast for a bit part, so I can see her role growing as the miniseries moves along.

Caroline: Is this series a true crime podcast come to life or a critique of the onslaught of the voyeuristic, stylized violence that’s been spilling out of everyone’s AirPods for the last few years? Aaron Paul’s last line, “The people will get their show,” makes me wonder if it’s the latter. All of the tropes are in place—a hardworking journalist (do podcasters count?) who’s in over her head, the charismatically eerie white guy who may or may not be guilty of a violent crime, the perfect American family that’s probably not that perfect. It’s a simple formula, but it’s weirdly compelling. I’m curious to see if showrunner Nichelle D. Tramble will complicate this familiar narrative, or if it’s just another iteration in a glutted true crime market, one that’ll admittedly be bolstered by the collective dramatic gifts of Paul, Octavia Spencer, and Lizzie Caplan.

Annemarie: Is this the movie version of every single unsolved true crime podcast that has ever been done? Yes, absolutely. I also want to know the truth of what happened that night, but I can’t tell how any of the people this trailer introduced relate to that. (At this point, a Google search informed me Octavia Spencer IS playing a true crime podcaster, so that’s cool.) The cinematography is perfectly eerie and pairs well with everyone’s distressed and sinister faces—no one smiled once in this whole trailer. Maybe consider a little comic relief? And, even though I feel like the presented story is interesting, I’m not sure how well it will stretch into an extended drama TV series. If I had an Apple TV, I would probably watch and find out. Current suspicions? The wife did it.

Roman: Listen, I love Emily Blunt and The Rock as much as the next guy, but one does not simply make a good movie by throwing two charismatic actors into a room, or in this case a boat, and call it a day. Especially when asking the director of all the non-Taken Liam Neeson action movies (aka the bad ones), Jaume Collet-Serra to make a family friendly film based on a Disneyland ride. Needless to say, I was less than impressed. I was initially intrigued by the potential of Emily Blunt being the superspy she was always meant to play (Damn you, Gulliver’s Travels), and for more Jesse Plemons content. Unfortunately, The Rock then showed up and delivered some of his trademark one-liners with no substance and I did not crack a smile once. Sadly, while I do love Blunt, I will likely be skipping this film. If I wanted a family-friendly jungle adventure flick, I would have watched Dora and the Lost City of Gold (2019).

Caroline: Disney has more than 30 films planned in the next decade, and not all of them can be winners. The entertainment conglomerate hasn’t made a movie with soul since Atlantis: The Lost Empire in 2001, and they don’t seem to be breaking from that trend with Jungle Cruise. Besides some vaguely colonialist jungle imagery that would put Joseph Conrad to shame, this movie seems like exactly what you’d expect from someone asking, “Hey, how do we turn a nine-minute theme park ride into a 100-minute movie that’ll gross a few hundred million dollars and will be completely forgotten in three years?” Please, someone tell me the plot of any Dwayne-The-Rock-Johnson movie. Anyone? Anyone?

Annemarie: Let me begin by confirming your worst suspicions: Disney did indeed make a movie about the Amazon without a single native or indigenous person in it. Or if they are there, they’re not important enough to make the trailer. As pleasantly surprised as I was to see The Rock here (does he not get tired?) I just feel like this movie is taking a pretty problematic approach to the Amazon. Do we need more depictions of white people “discovering” the riches of the Amazon, especially when they put some mystical spin on it? Decidedly, no. Unless this movie is drastically different than the trailer suggests, it was in no way worth what I am sure was an absolutely enormous production budget.

Trailer was disappointing, but I guess I still gotta know these 3 NEW characters as they are different from the Charlie’s Angels I grew up loving. https://www.youtube.com/watch?v=YkQtn0BM0yo Here I listed 8 Things We Didn’t Know that’ll probably help people appreciate them more (or not), give it a go!

The attractiveness from the thing is that will locate
no unwanted side effects reported, until now.