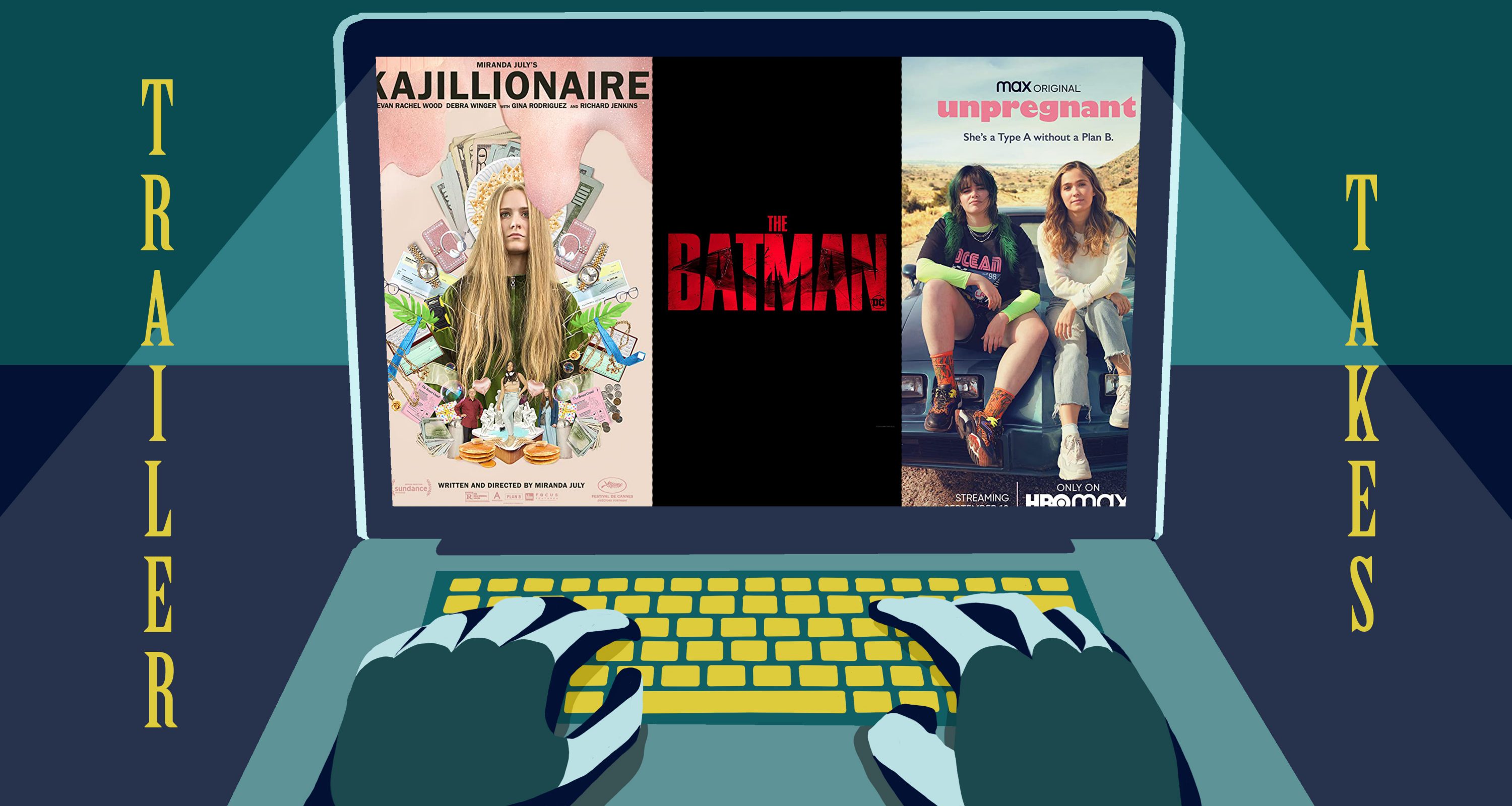 John: I will admit the DC brand of superheroes has always taken itself a little too seriously for my liking. Especially in the most recent iteration of the DC cinematic universe, the dark tone of the films has always strayed a little too far from the playfulness of comic books. While this trailer certainly is following that same tradition, I still think that this iteration of the Batman has some potential. The action seemed sharp (pleasantly free of shaky cameras and jump cuts), and the concept of the Riddler as a serial killer-like villain is an interesting spin on the otherwise hokey character. All I hope is that if it’s going for gritty, its inspiration is more aligned with the Nolan trilogy than whatever Warner Bros. has been doing with Ben Affleck.

Sarah: I have never watched superhero movies and I honestly don’t know what is happening. There is darkness. It is creepy. I am scared. I probably won’t watch this movie based on those three facts alone.

That being said, even the most adamant of scaredy-cat movie watchers such as myself can’t help but be intrigued. I want to know what the recurring theme of “lies” will turn out to be. I get the feeling this film will throw in some major twists and reveals, and the mystery is enticing. One of the reasons I typically do not enjoy DC films is because they feel somewhat predictable due to the comic books and the knowledge that the “good guy” will always come out on top. The plot of The Batman, however, may be a little more unpredictable.

Annie: Tape sounds. Kinda an unsettling way to open a trailer but I’m vibing with it. And using Nirvana’s “Something In The Way” to score the trailer was perfect. Yet another dark and brooding rebooting of Batman sparked mixed feelings in me as someone who grew up on Tim Burton’s classic, comic book-esque Batman (1989), but this trailer has me hyped regardless. This is clearly going to be an edgy Batman, the kind of Batman we’ve been seeing since The Dark Knight (2008), and Robert Pattinson’s gritty look brings that home. The shots are haunting, intriguing and focussed, so props to director Matt Reeves, and I am absolutely thrilled about this take on the Riddler. This movie features some of Batman’s most iconic villains and I can’t wait to see more of  Zoë Kravitz’s Catwoman, Colin Farrell’s Penguin and, of course, Paul Dano’s Riddler.

I have two grievances: not enough Kravitz, and Bruce Wayne’s hair. Kravitz is one of the main reasons why I’m going to see this movie and I wanted more of her in this trailer. And why is Pattinson’s hair the way that it is? He is an attractive man and it can be better. Do better DC.

John: This movie is definitely trying to start a political conversation. Right from the get-go the premise is clear: Haley Lu Richardson’s character has chosen to get an abortion, and will need to drive across state lines to make that happen. I definitely support the idea of crafting a film to demonstrate just how many barriers still exist in some states to accessing safe procedures, but what interested me about this trailer is the way that message was packaged. It’s a buddy road-trip comedy, and a charming one at that. Definitely one to watch, I’m sure you’ll see it in the news at some point.

Sarah: I think this is going to be a very unique movie, not necessarily focused on the concept of abortion, but true friendship. Who do you turn to in a crisis? Who is always there for you no matter what you’ve done? Sometimes that person isn’t a family member, but a friend. The trailer seems to play with the trope of two good friends who have lost touch due to social divides but reconnect when the ‘popular’ girl finds herself alone in the world and in need of her best friend. I think that another major theme of the film will be the complex idea of judgement, as the main character fears social and family judgement for her pregnancy and her friend seems to be loosely based on the “high school loser” stereotype.

I predict the abortion theme will make this movie hard for some of the public to swallow, but I also think it will encourage a message of unconditional love and support in place of condemnation.

Annie: In just the first 20 seconds of the trailer, it’s clear that this movie is making a point about the obstacles women face when getting an abortion in this country. It’s a refreshing take, it seems like the question will not be if she’ll get the abortion but how she will be able to do it. Inherently this movie is calling out those who make it more difficult for young women to exercise their right to choose, all while giving the audience a lighthearted and comedic tale of two girls on a road trip. I’ve never seen abortion and comedy paired in story-telling, but quips from Barbie Ferreira’s character and shots of her and Haley Lu Richardson’s character stocking up on road trip snacks and dancing in the car make it clear that this movie wants to do both. With two estranged friends on a crazy adventure, Unpregnant is being advertised as a coming-of-age film. I for one am really interested in seeing how this will play out, and will definitely be streaming it in September.

John: This is a strange one. The first half of the trailer sold it to me as a comedy about a family of cons—quippy, clever, and creative. Then, halfway through the trailer, the tone does a complete 180. The music slows from upbeat indie pop to a droning lament that reminds me of Lorde or Lana Del Rey. The jokes take a backseat to family drama and very deeply ingrained parental issues. While normally I feel like I would be excited by a movie trying to push something thematically stronger than your average comedy, something really is not working for me here. Maybe it’s just the trailer, but it almost felt like an advertisement for two different movies spliced together: one of which was a fun heist-comedy romp, and the other the vision of some up-and-coming art house filmmaker. Neither are bad, but they clashed, and detracted from each other and the trailer watching experience.

Sarah: To preface, I absolutely adore heist movies. Oceans 11, The Italian Job—let’s just say I get very invested in these kinds of films. Which makes me incredibly excited to see how this movie plays with the theme of an unconventional family trade. Unlike other heist movies that focus on, well, the heist, I am excited to see how this film focuses on character development and inter-familial relationships. Watching the trailer, it reminds me of Jeannette Walls’ memoir “The Glass Castle.” This family obviously lives differently from society and raises their children in what appears to be a cold and compromising manner. But, at the end of the day, they are family, and love each other, even if their form of expression differs from the world around them.

I am intrigued to see how Gina Rodriguez’s role plays out, and I am also very excited to see her in this movie. In the trailer alone, her character seems to add a comic break that will add a playful dynamic to the film.

Annie: With incredibly limited knowledge about this movie before seeing the trailer, I can say that this is a family story about a family of cons. I think it’s a great idea, and feels like a new and refreshing take on a story I’ve heard before. Like a far more lighthearted, and I’m assuming incredibly less violent, The Godfather (1972). The trailer has some somber tones but is advertised as a quirky comedy, which, while a tad thematically confusing for a 2 minute and 30 second clip, I think actually works. It’s the kind of quirky you expect from a film that premiered at Sundance. The inevitable humor of a family of schemers and the introduction of an outsider played by Gina Rodriguez seems to bring some light into this film, but a central part of the story is a girl who only knows this unconventional family dynamic and feels trapped in it. This family clearly isn’t “normal,” and seemed to raise Evan Rachel Wood’s character in a rather unusual way that she sometimes struggles to come to terms with. Kajllionaire feels like the classic movie where a person in an unorthodox situation finds themselves and learns to be comfortable with who they are. Like Sarah, I am a big fan of heist movies, and while I may not rush to see this film, I’m definitely intrigued and will watch it eventually. 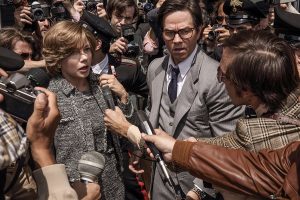 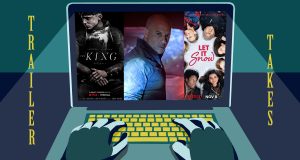