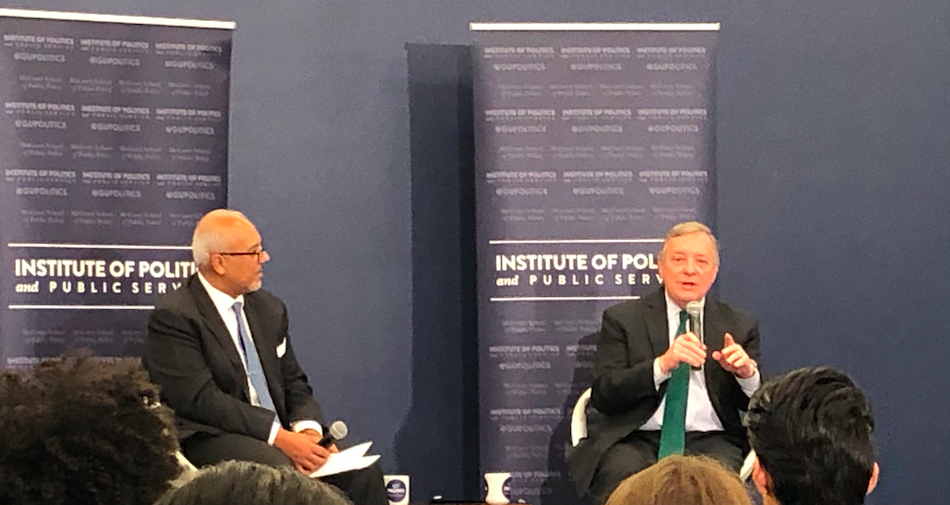 The talk, titled “The New Senate Democratic Agenda,” was moderated by Mo Elleithee, executive director of the Institute of Politics and Public Service. The topics of discussion ranged from the recent government shutdown to criminal reform, immigration, and health care.

Durbin was introduced by GUSA president Juan Martinez (SFS ’20). Martinez, a DREAMer, credited his presence at the university to Durbin, who sponsored the DREAM Act in 2001. “Senator Durbin is one of my personal heroes,” Martinez said. “As a DREAMer and DACA recipient, I appreciate everything Senator Durbin has done for my community.”

Discussing a speech he gave last year at Oxford University, Durbin said that people start to move towards authoritarianism when they begin to feel frustrated with the current system and want a radical change. “That kind of frustration leads them to look for simple answers. ‘Maybe democracy doesn’t work? Maybe we need someone to help make these decisions who has power and authority…’ The authoritarian answer is what people turn to in frustration,” Durbin said.

When asked about the Trump administration’s policies and why he believes many voted for President Trump in the 2016 election, Durbin replied that many people became attracted to Trump because he was such an outsider, and that he did things differently in his campaign than what many politicians usually do.

Speaking about the State of the Union, which took place the next day, Durbin asserted that Democrats must not compromise on their values, and stick true to what the party is.

“From my point of view, it’s part of the reason why I spend the time I do in public life.” Durbin said. “If I didn’t think that this party that I belong to, and the people who support me in this party, were moving as forward in those fields, then I’d be selling insurance in Chicago.”

“The challenge is first to convince them [constituents] that we have some form of the Hippocratic Oath, first do no harm. If you’re going to change the system to wherever you are headed, you have to make sure that in the process people feel that they are not being hurt.”

Durbin also spoke about the necessity of third party validation to Medicare for all, namely from doctors and nurses, and to implement any future programs slowly.

When asked about the most recent government shutdown, Durbin had a simple response to his thoughts on the matter: “What did the shutdown teach us? Well, it taught us that we ought to do away with shutdowns.” Durbin said. “The only way to avoid another shutdown is if Republican senators will join Democratic senators and say ‘we’re just not going to go through this again.’”

Durbin said that he is confident that there will not be another shutdown, since many Republican senators are “fed up” with how the previous shutdown went. Durbin continued by stating that it would be a big blow to the Trump administration if any Republican senators defected with regards to government funding.

Durbin believes that the “breaking point” of the shutdown came when air traffic began to slow down at several major airports on the east coast, such as JFK, LaGuardia, and Newark. Durbin also spoke of meeting a constituent who is an air traffic controller during the shutdown who told him that her coworker had to sell his plasma just to afford gas to get to and from work.

Durbin finished the evening speaking about the “worst vote I’ve ever made” while in Congress, which was the Anti-Drug Abuse Act of 1986, which set federal mandatory minimums and a 100:1 sentence for crack cocaine over powder cocaine. Regarding voting in favor for the bill as “the worst decisions we [Congress] ever made,” Durbin spoke about how the law failed to stop drug abuse, and led to an increase in convictions of mostly African Americans.

Durbin spoke about wanting to fix this problem, which eventually came in the form of the Fair Sentencing Act in 2009, which brought the sentencing ratio down to 18:1, the current rate today. Durbin said that by working with Senator Chuck Grassley of Iowa, the senate was able to pass the First Step Act, which was recently signed into law by president Trump on Dec. 21, 2018.

When asked about the future and the 2020 election, Durbin said that while he personally has no plans in running for president, he is confident in the future.

“At the end of the day, what I am looking for in a candidate is someone who can credibly lead the United States of America with the right values.”