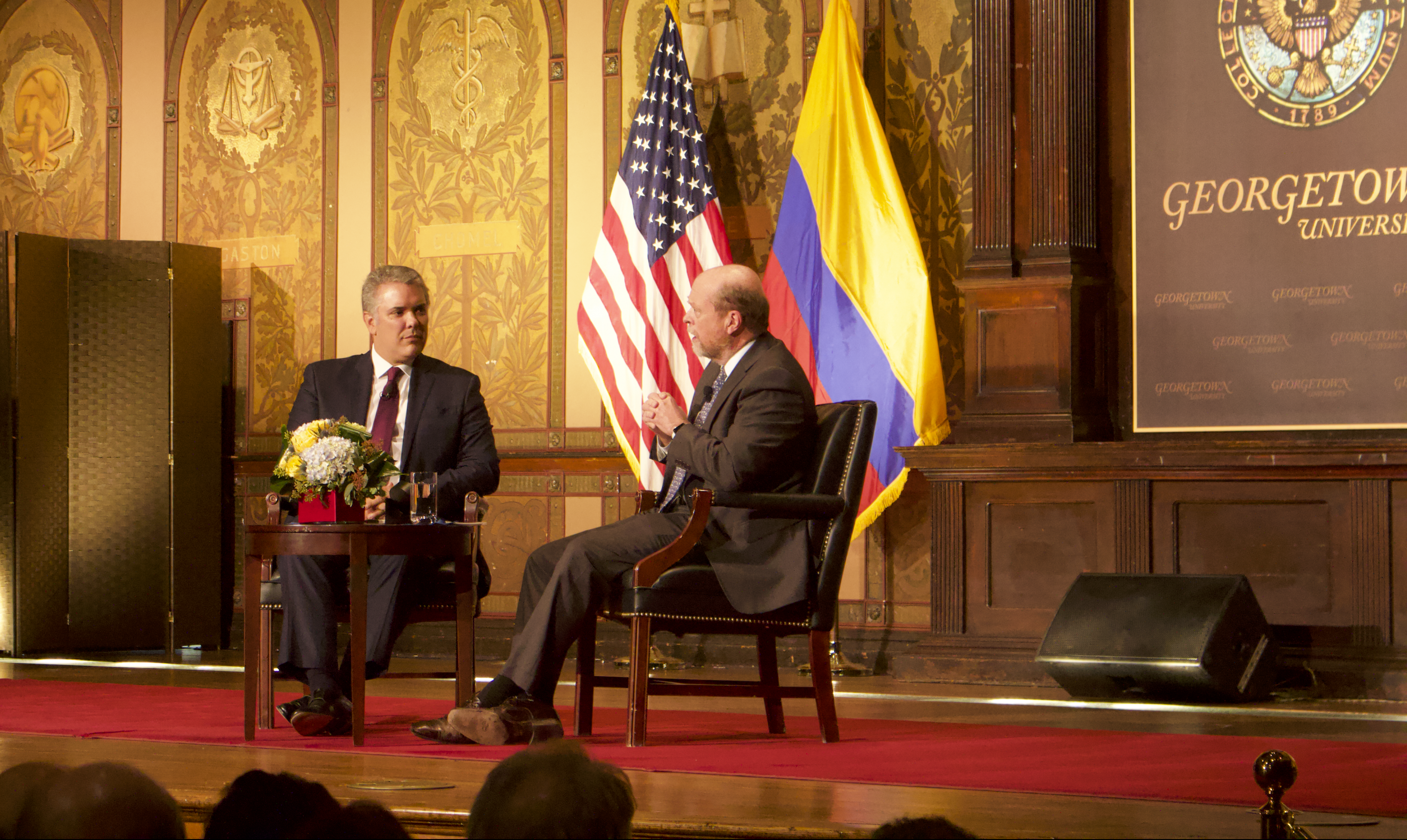 Duque was excited to return to Georgetown, where he graduated from the McCourt School of Public Policy with a master’s degree in public policy management. “I always remember the lessons I took from Georgetown in my daily activities,” Duque said.

The event was cosponsored by the Latin America Leadership Program, Colombian Law Students Association, and the Center for Latin American Studies.

Duque discussed Colombia’s domestic and economic policy but saved his strongest words for Venezuela, where President Nicolás Maduro has been in power since 2012. He urged world leaders to support the partially-recognized interim president Juan Guaidó in peacefully forcing Maduro out of office.

Currently, Colombia is straining to accommodate the more than 1.2 million Venezuelan refugees it has accepted in the last two years. Duque admitted it has been a difficult process, but he remains committed.

In the 1980s, when Colombia was in the throes of a civil war, Venezuela accepted millions of Colombian refugees, according to Foreign Policy. “It’s our moral duty, first of all, to express fraternity,” Duque said.

Since a peace agreement was signed with the Revolutionary Armed Forces of Colombia (FARC) in 2016, Colombia has been in the process of recovering from decades of civil conflict. Duque looked forward to rehabilitating affected communities, but he also stressed the need to deter former FARC rebels from reneging on the deal. “Peace requires legality, no impunity, and the right measures,” Duque said.

Recovery, he believes, requires sustained economic growth. In the first year of his administration, Duque has streamlined tax policy, lowered barriers to regional trade, and invested heavily in STEAM and education.

“Colombia has gone from being considered a failed state to a vibrant economy,” Duque said. “I want to put Colombia on the path of becoming a high-income country.”

For Duque, education is the key to not only economic growth, but also social progress. This year, his administration passed the largest education budget in Colombian history, a step he believes will help close the national wealth gap while bringing new talent into the Colombian economy.

“If we can close the gap of education,” Duque said, “I think we will be able to change Colombia for the good.”

Duque credits Georgetown for helping him value education and its application to politics and the public service. After graduation, he worked at the Inter-American Development Bank, but after a few years, Duque decided that he could best serve Colombia by returning home and running for political office.

He called on Latin American students in the audience to consider getting similarly involved in politics in their home countries.

“I know there are many brilliant people in this room who are about to graduate or do their postgraduate studies,” Duque said. “That’s my invitation to you. Search for that call. Respond to that call.”