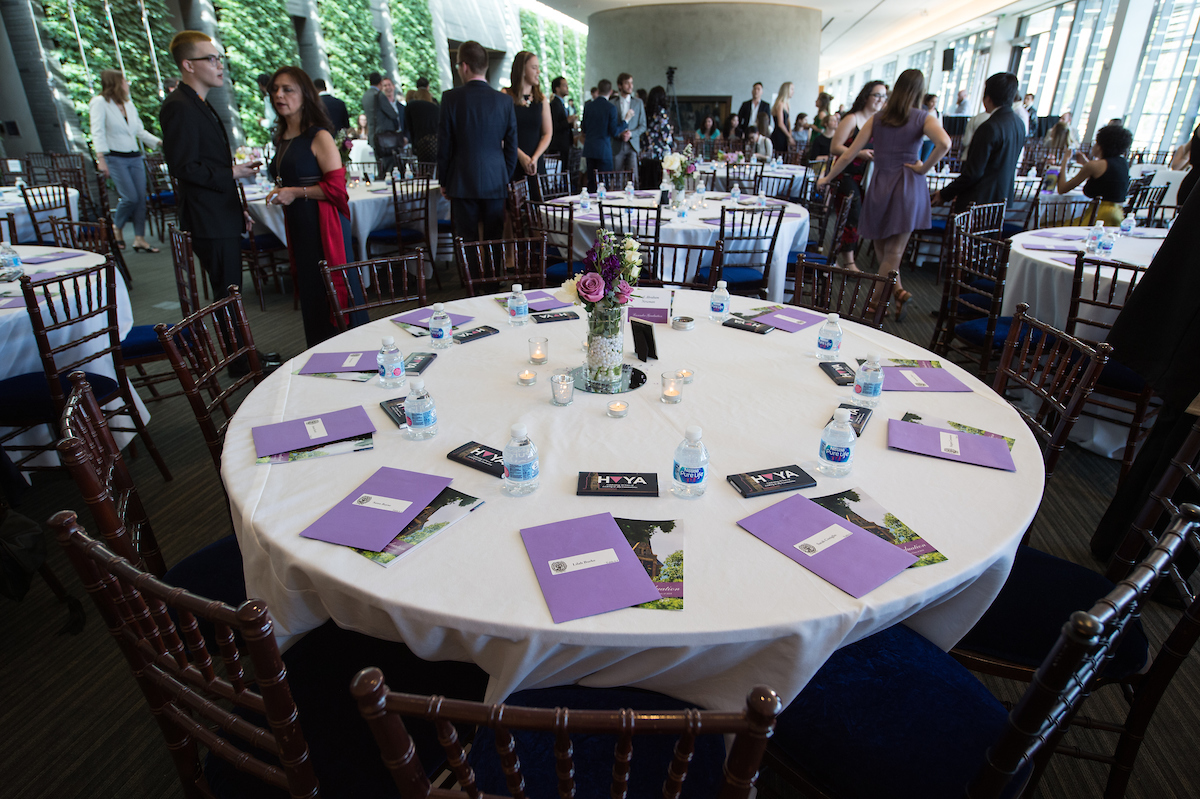 Shiva Subbaraman could not help but chuckle about how much life for LGBTQ students has changed since her first day at Georgetown. “Every which way you can dream of,” she said.

Subbaraman has been director of Georgetown’s LGBTQ Resource Center since its founding in Aug. 2008 and has seen these shifts up close. For her, nothing exemplifies this change like Lavender Graduation, an event that honors LGBTQ and allied students for their achievements on campus.

“To do a ceremony that would honor LGBTQ students was considered quite revolutionary and quite out of the box,” Subbaraman said about the event hosted by the Center, which in 2008 became the first of its kind to gain formal support by a Catholic university. “From an institutional perspective, it’s one thing to support, but it’s another thing to honor us. That’s way outside of the scope of the imagination in a Catholic context.”

On April 25, 147 students in formal wear will file into the Healey Family Student Center’s Great Room for this year’s Lavender Graduation. The guest list numbers more than 400 and includes the university president, provost, deans, and professors. Students will be called up, honored, presented with rainbow cords by members of the faculty. While convocation for the class of 2019 is still a few weeks away, these students are ready to celebrate now.

“I am always excited for Lav Grad because it is a great opportunity to see the whole university come together in celebration of LGBTQ identities and struggles,” Allen Easterling (SFS ’19) wrote in an email to the Voice. “Seeing so many students gathered together in community is a truly heartwarming experience, and now I get to be a part of that as a graduating senior.”

Besides representing a gathering of the Georgetown LGBTQ seniors, Lavender Graduation is also an opportunity to hear from alumni. This year, two recent alums who hope to share their stories with students will give the invocation and keynote.

Joshua Guzmán (SFS ’10), assistant professor of gender and sexuality at the University of California, Los Angeles and the event’s keynote speaker, remembers his Lavender Graduation fondly, but has not attended one since. He looks forward to seeing how the campus climate has changed.

“You used to attend in regular clothes with your friends,” Guzmán said. “Seeing how big it’s grown, I am very excited to see it.”

Joseph Graumann (SFS ’11), a pastor at St. Stephen’s Lutheran Church in Marlborough, Massachusetts and this year’s invocation speaker, is also excited to return, especially as he could not attend his own Lavender Graduation due to a skin cancer diagnosis. He knew right away what he wanted to bring to the event.

“I think it is important to return to Georgetown to pray a big gay prayer for my beautiful rainbow people,” Graumann said.

According to Subbaraman, the excitement that Graumann and Guzmán bring demonstrates how much things have changed since their years as LGBTQ students at Georgetown. “Most of them had such negative experiences on campus they weren’t willing to come back to campus and didn’t want to have anything to do with Georgetown,” she said.

Subbaraman hopes that inviting alumni to return to campus can heal some of those wounds. “I started bringing back alumni as our keynote speakers mostly to showcase all that the Hoyas have done in the world of LGBTQ organizing, activism, policy, medicine, law,” she said. “They are everywhere.”

Beyond re-engaging alumni, the ceremony centers around the graduating students and honoring their place on campus at the end of their four years. Subbaraman says Lavender Graduation is an opportunity to laud a group whose time at Georgetown has been fraught with challenges caused by their queer identity.

The first school-sponsored Lavender Graduation took place in 2009 after the formation of the LGBTQ Resource Center, a campus support system which has proven to be a valuable asset to LGBTQ students. The Center opened in Aug. 2008 after student activists put pressure on the university. Responding to a string of anti-gay hate crimes on campus, students formed the Out for Change campaign to advocate for the rights of LGBTQ students on campus. For many, simply being who they were proved a challenge. “It was seen as kind of outside, you felt like you were different,” Graumann said.

With the introduction of the Center and events such as Lavender Graduation, LGBTQ students have become more comfortable with active participation in campus life. This has caused Lavender Graduation to outgrow the rooms that it used when there were 20 or so graduates. Now, the event uses the Great Room because it is one of the few spaces on campus that can accomodate the more than 500 attendees.

“The fact that many of our students are thriving and are successful and are finishing college is an important milestone to celebrate,” Subbaraman said.

While Lavender Graduation has grown in size, it has also grown in scope. Any student can sign up, and allies are welcomed. According to Subbaraman, an ally is any student who has made a difference in the  LGBTQ community. “The truth is, without our allies it is very tough for the community because we cannot always speak up. We are not always in a place to be empowered.”

The ceremony also celebrates the Center itself and all that it has done for the students who consider it a welcoming space on campus. “It is a space for me to exist in my queerness without worry or stress because it is not questioned,” Easterling wrote. “It is one of the few spaces on campus where I do not have to come out or pretend to be and can instead just simply be.”

Subbaraman remembers that when she arrived at Georgetown, the feeling of isolation caused many queer students to close themselves off from opportunities to be involved in campus life.

“LGBTQ students did not do much else but be closeted, be fearful and take part in GUPride,” Subbaraman said. “I certainly think being a member of the LGBTQ community can be a barrier to success and to being successful in school.”

In a speech on Oct. 27, 2007, regarding the implementation of new resources for LGBTQ students, university President John DeGioia concurred. “To do the difficult, demanding work of personal formation, you need a sense of security,” he said. “We all need that. When that security is absent, or when we are in doubt about the environment in which we are living, it is difficult to do the very best work of which we are capable.”

From the top down, the university moved toward change. The administration created three working groups on education, resources, and reporting that focused on LGBTQ issues at Georgetown, eventually forming the LGBTQ Resource Center in 2008.

While many students today take the Center as a given on campus, the existence of a space at Georgetown specifically for queer students was revolutionary in 2008. Before then, there were no LGBTQ resource centers at any Catholic university in the country. However, DeGioia referenced Catholic values as guiding his decision.

“What are the resources that the Catholic moral tradition brings to the core work of providing an educational environment in which every individual can flourish?” DeGioia asked. “Which ways of working towards this goal are most appropriate and authentic to our Catholic and Jesuit identity, and which are not?”

Subbaraman became the Center’s first director and set to work helping to fix the campus culture she said was holding LGBTQ students back. Change came quickly, according to Graumann.

“It seemed like LGBTQ students were visible and had agency and were affirmed by the university,” he said. “To have a space to call our own that was brightly decorated, that was full of queer people, meant a lot. It became a place of activism, of welcome, of education.”

For Guzmán, the Center offered a platform for important discussions about the LGBTQ community. “It not only brings the community together, but it provides a space for students to come together to share ideas, to share experiences,” he said. “It brings in people to give talks and creates a discourse.”

The open atmosphere at the Center connects to the institutional support at Lavender Graduation, which Easterling, a member of the LGBTQ Resource Center’s staff, described as valuable. “It’s especially important for me to see a lot of university administrators in attendance,” Easterling said. “To see that they were there and actively supporting the community, even by just attending, it is an important thing for students to see.”

Guzmán was not surprised by the university’s committment to LGBTQ students. “This is one of Georgetown’s strengths: to promote understanding and discourse around difference,” he said.

However, institutional backing does not mean that everyone supports LGBTQ programs like Lavender Graduation.

“If I do it during graduation time, parents will not come,” Subbaraman said. “Families will not attend because they are still not that supportive. Even if they may be accepting, they won’t come celebrate. I needed to do this at a time when the rest of campus could come and celebrate my students.”

Accordingly, the challenges facing LGBTQ students are still present. Al Castillo (SFS ’22), GUPride’s deputy director of communications and Queer Person of Color Liaison, knows that some LGBTQ students can still find themselves marginalized on campus. “As a trans person of color, I understand that it is easy to feel isolated in a majority white cis gay community,” he wrote in an email to the Voice.

Guzmán recalls that the student activism which led to the Center’s founding started in the classroom. “One of my hopes is that the Center can really show the need for more LGBTQ studies classes at Georgetown, to departmentalize the Women [and Gender] Studies program at Georgetown and to bring more faculty of LGBTQ backgrounds in,” he said. “The ideas started in small little classrooms and grew into the student activism that built this center that is big and robust now. Hopefully it comes full circle and seeps back into the curriculum.”

While LGBTQ activists continue to strive for progress, the Center is already a place that students can turn for help.

Still in his freshman year, Castillo has seen the Center make a difference. “The Resource Center will always be a comfortable space LGBTQ+ identifying students and I can turn to at any given moment,” Castillo wrote. “The Center’s accomplishments and commitments to LGBTQ+ equality at Georgetown University are insurmountable.”

Graumann agrees that the introduction of the Center made a difference, but believes that much of the credit should go to Subbaraman. “The fact that it has grown is a testament to our place on campus and the hard work that Shiva has done,” Graumann said. “She is a tireless advocate for LGBTQ students at Georgetown.”

Discourse on LGBTQ rights has increased over the last decade at Georgetown, and campus visibility of events like Lavender Graduation is at an all-time high.

“When I was a freshman, many of my friends didn’t know about it,” Easterling said. “Now, it’s something that a lot of people know about, even in the first few weeks of school, because it’s something talked about.”

Guzmán looks forward to seeing the visibility and inclusivity when he comes back to campus. “I’m really happy it has grown in this way,” Guzmán said. “We are no longer in the shadows, as it were. We can actually be together.” 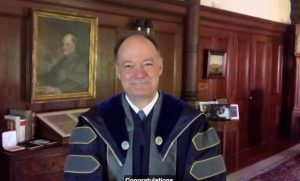