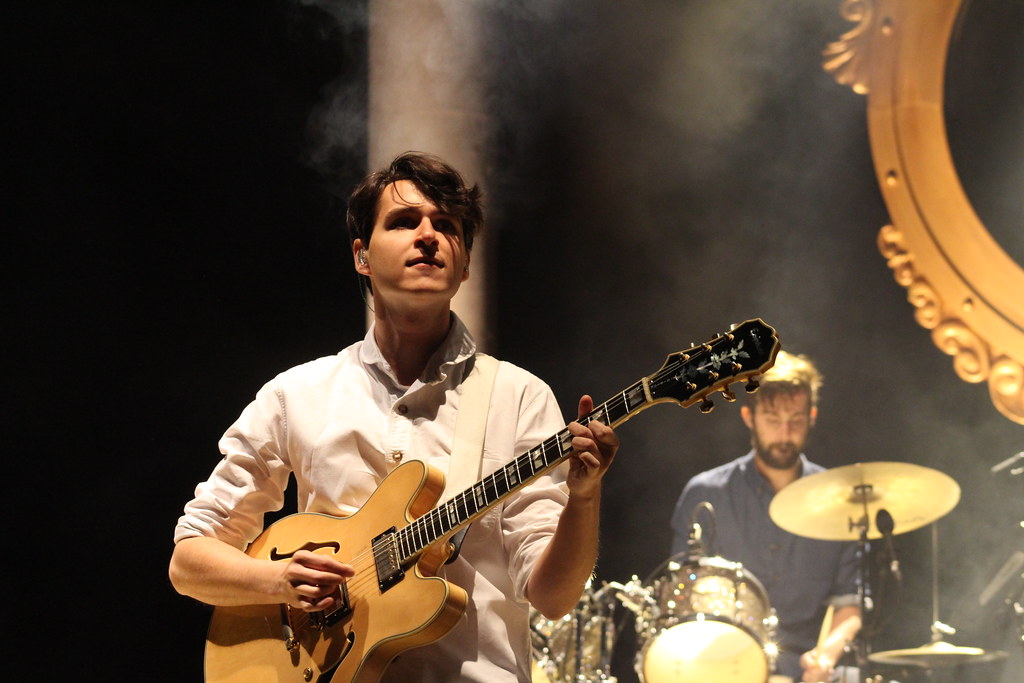 Ever since the release of Father of the Bride (2019), it seems like Vampire Weekend is all anyone can talk about. Personally, I had only heard “A-Punk” prior to their newest album. Other than that, I just thought they had a cool name. I discovered Father when “This Life” popped up on my Discover Weekly playlist by Spotify. The catchy nature of the song prompted me to listen to the entire album, which blew me away. That, in turn, prompted me to listen to every single Vampire Weekend song, ever. Every studio album, EP, B-side, and cover they had released. I then listened to each of these songs 50-100 times and ranked them all by album. After that, I comprised my ultimate top 10 list—the only time I’ve made one and been 99 percent sure I didn’t disregard any song in the process (I’m sure there’s some basement demo out there that I haven’t heard. If you know of any, please inform me). Oh yeah, and then I figured I may as well rank their other 47 songs while I’m at it because why not? Anyways, please dive in.

While I was scouring through all of Vampire Weekend’s albums, EPs, and singles, I completely overlooked this track. That’s because of its deceptive structure. The composition starts out slow and sleepy. It’s easy to toss the track aside for more upbeat bops like “A-Punk” and the new “This Life,” but in doing so you would be throwing away one of the greatest hidden gems of all time. “Hannah Hunt” is one of those songs that you ignore for the first 10 listens of the album. And why would you notice it, when “Diane Young” is right in your face from the get-go. However, by the 20th time I listened to Modern Vampires, “Hannah” was the only song I was paying attention to. The tune represents the perfect ratio of foreplay and satisfaction. The ominous bassline and drum pattern that’s present for the first 70 percent of the song teases us multiple times. As listeners, we are begging for something more and right as we’re about to explode, Ezra delivers a catastrophically beautiful climax, revealing the true depth of his vocals.

This is definitely one of the lesser-known songs by Vampire Weekend. The song was released exclusively as a B-side to the single, “Holiday.” Composition-wise, it is highly superior to its A-side and deserves to be heard by the masses. The music snob within me wants to keep this song a secret, but that would be an injustice. Multi-instrumentalist Rostam Batmanglij somehow manages to incorporate an antique harpsichord sound, while still maintaining modernity. Also, look out for familiar lines from “Cape Cod Kwassa Kwassa,” as this is one of the few instances in which the band reuses lyrics.

“Walcott” is another song not originally released as a single. However, the hidden potential speaks for itself. This song offers a savory juxtaposition of energy with relaxation. Coming right out of the gate with the high intensity chords generated by a keyboard synth, “Walcott” then begins intercutting Ezra’s spoken-word vocals. Furthermore, the contrast of the drums and strings offer a sweet and salty mixture, similar to that of chocolate covered potato chip (if you haven’t already, do yourself a favor and try them).

Vampire Weekend thoroughbreds everywhere will rip me to pieces for saying this, but “Giving Up” is the one shining star on an otherwise “okay” album. “White Sky” and fan-favorite “Diplomat’s Son” temporarily hold my interest, but neither sucks the listener in as much as “Giving Up.” The stop and go beat behind Ezra’s singing is just another example of contrast that the band uses. While the song alone is superb, the music video depicting Joe Jonas, Jake Gyllenhaal, and Lil Jon battling a woman in a tennis tournament officiated by RZA takes the cake.

I hated this song the first time I heard it. I can’t really remember why. I think I was just put off by the fact that the song is about an English grammar rule, but then again, they are Ivy League boys. When going back through the albums one by one, though, “Oxford Comma” stood out to me. It’s genius, using the pointless nature of an oxford comma as a microcosm for not giving a fuck about anything. The song is also just so melodically pleasing. It reaches its peak form when Ezra asks, “Why would you lie ‘bout how much coal you have?,” a reference to an example used by English teachers to render the oxford comma necessary (“I have 100 pounds of iron, 50 pounds of gold and coal” vs. “I have 100 pounds of iron, 50 pounds of gold, and coal”).

This album is the story of two very different women. Hannah Hunt is the girl you pine over, write love letters to, and eventually experience your first heartbreak over. Diane Young on the other hand is the eccentric wild-card you meet at a bar one night, the mysterious girl whose ambiguity is too strong to ignore. While the former is a safe bet, the latter offers a risk too tempting not to take—a risk that may leave you “dying young.”

The reason I love this song and believe it to be better than “A-Punk” is for one reason and one reason only: the anticipation. Listen to “God” by John Lennon and you’ll understand what I mean. In the philosophical ex-Beatle’s solo track, Lennon promptly lists 15 things he doesn’t believe in before finally stating “I Just Believe in Me,” ending the verse. During the listing, the rhythm is repeated 15 times. It drives the listener insane, wondering when, if ever, the cycle will end. Vampire Weekend employs a similar, yet shorter version of this tactic. They open the song with eight lines of spoken dialogue, each followed by the same exact rhythmic pattern, before Ezra finally belts out “Is your bed made?” That single line is probably the most satisfactory in all of the band’s repertoire. Similar to Lennon’s “I just believe in me,” Koenig’s “Is your bed made?” relieves the audience of seconds upon seconds of pent-up frustration.

Every part of my people-pleasing subconscious wants to put this song in the top three, but I really don’t think this song is worthy of medaling. What I will say is that “A-Punk” is the safest bet to include in a top 10. Ask any Vampire Weekend fanatic to make a list like I’m doing, and I guarantee that while almost no one will have “A-Punk” in its number one spot, it will be represented overall more than any other song. There’s a reason it’s their most popular tune. It’s catchy, upbeat, and makes you want to dance. ‘Nuff said.

While still relatively unknown, I believe this song will rise in popularity over time. It’s not as inobtrusive as “This Life,” but the random sound effects, wide variety of instruments, and shifting vocals make this song an unpredictable joy to the listener. I was particularly drawn to the third chorus when what sounds like a synthesized clapping sound effect plays on every other beat. It adds a sense of hesitation to the track, which in turn gives it character.

There is little to say about this song. It was released last April and has since racked up over 23 million plays on Spotify. It offers a fun, catchy summer vibe. Unlike most of Vampire Weekend’s material, “This Life” is one of those songs that you hear once and are immediately hooked. It’s similar to “A-Punk” in the sense that it’s accessible to the mainstream crowds, not just the diehard Vampire Weekenders.

This is originally a Bruce Springsteen song, but Vampire Weekend takes complete control of this cover. It almost sounds like a brand new composition altogether. Be sure to listen to this treat and watch out for rhythmic references to both Journey’s “Don’t Stop Believin’” and Shakira’s “Waka Waka (This Time for Africa).”

Ultimate Ranking of Every Vampire Weekend Song Ever

Tier 1: Must listen to. I don’t care who you are or if you’ve ever heard of Vampire Weekend. Listen regardless.

Yikes, this is rough. I want to disagree with you on a lot, but I think that because of how diverse VW’s music has gotten since the first album, no one should really agree on much. Except Young Lion and Hudson being not good. Those are the only two songs I ever skip

Oof, having someone rank an entire catalog of a band’s music with the lack of familiarity that this author had is….questionable.

Agreed, but good for him and they have another fan.

I don’t know what I was expecting to read. But it’s kind of dumb ranking their music, in my opinion. You’re opinion is obviously going to be wildly different from other people’s.

You’re entitled to your opinion. But I’ll be the one to say it: your opinion sucks. Finger Back ranked at 36? That’s just disrespectful. Agree with Sean’s comment that trying to rank their music is a pointless endeavor. All their music is good for different reasons. With the obvious exception of Hannah Hunt, you seem to give more weight to their upbeat, catchy radio hits, which is fine of course. But in my opinion, some of their best music is on the bottom half of your rankings.

One more thing before I wrap this up: Ottoman recycles lyrics from Campus, not Cape Cod.

Thanks for the feedback! They may also use lyrics from Campus in Ottoman. Not sure, but “Peter Gabriel…” is directly taken from Cape Cod.

No offence but if youre a really big vampire weekend fan you have obviously heard 2021 and sunflower.I think hes trying desperately to be too out there-Ottoman is great but certainly not the second best VW song

How Long and Unbearably White are pretty clearly the worst songs on FOTB.

It’s OK to see what other people like and dislike about VW. We all have our favorites, which means we all have some that are less favorable. I personally love Rich Man although nobody else seems to like it. And that’s OK too.

The injustice to California English. I cannot believe….