Serving as a mostly faithful retelling that is still able to feel like a unique story, J.B. is a riveting adaptation of the Book of Job, one of the more famous stories in the Old Testament. The original text conveys the tale of Job, a prosperous man with a large family and absolute devotion to God who’s put through a series of ordeals by the Devil to test whether Job’s faithfulness is genuine or caused by his material fortunes. This version of the text serves as a moral tale that encourages people to never doubt God and to believe that despite horrific circumstances, they will be rewarded for their devotion.

The play presents a similar story that’s been updated to 1950s America and includes a new framing device. Job has become J.B. (William Hammond, SFS ‘23), a millionaire banker with a happy family that includes his five children and a loving wife who are all caught up in a story told by two actors in a circus. While this setup bears striking similarities to the original story, the way that these ideas are presented and the introduction of new themes create an entirely different experience.

Simply seeing how J.B. and his wife, Sara (Kate Clark, COL ‘21), deal with the terrible events that befall them is moving. The actors do a wonderful job of portraying parents grieving the loss of all their children in addition to their home and financial stability. It almost feels uncomfortable watching them deal with these tragedies since their emotional responses, dialogue, and physical performances are incredibly similar to how we grieve in real life; every clenched fist, unbelieving stare, stumble from disbelief and exhaustive posture from sadness adds a physicality to their performances that never feels over-exaggerated. An earlier scene of a joyful family dinner provides a counterpoint to these depictions of grief and drives home how losing someone can utterly destroy the world of those left behind, causing an exuberant mood to turn into one of shock and tears.

The two actors named Zuss (Chris Phillips, MSB ‘20) and Nickles (Mac Riga, COL ‘21) provide an air of condescending energy with pangs of empathy that emphasize their roles in the story. The characters are clear metaphors for God and the Devil respectively, so while they may have inherent sympathy for the suffering that J.B. goes through, they’re more committed to their ideological stances and finishing out the story than ending the pain. This causes most of their scenes to be aloof and philosophical, but they’re each given scenes where their exterior of calmness begins to crack, especially the Devil. This allows for nuanced performances where the actors must juggle multiple emotions at once with great control.

The performances of the cast as a whole are solid and convincing. Each member brings a sense of movement and expressiveness to their roles, whether they’re joyful children looking for a story or a “comforter” that’s explaining their philosophical viewpoint. The actors imbue their characters with little nuances that help to expand their roles—such as adding an Irish accent or rocking back in forth with excitement—without breaking from the general mood.

The set design creates a feeling of intimacy that allows the audience to fill in the details of the scene. The left side of the stage portrays the backstage of the circus while the right side showcases the dinner table of the family. There are enough details in each set to create a clear image, but not enough to fill in every section, forcing viewers to impose their own impressions on the home and the circus. This design enabled the director to add more movement of the set during the production without using numerous cast members so that the scenes could be changed quickly and the drama can be unrelenting.

The lighting, sound, costuming and makeup teams were able to create motifs through their respective fields that brought multiple layers of thematic relevance. These included the sound of strong winds and flashing lights to signal the presence of a being beyond even Zuss’ and Nickles’ comprehension, clown makeup denotes those who bring bad news to J.B., and the main characters’ gradual loss of clothes. Each motif holds numerous meanings that will be dependent on the audience’s interpretation of events, providing a reason for more than one viewing.

One of J.B.’s true strengths is its questioning of issues that were glossed over in the Book of Job or are brought forth by a modern understanding of the work. The amount of themes that are available to analyze and account for is truly staggering; the morality of Zuss’ and Nickles’ actions, a new message of love being more worthy than evil and faithfulness, and questions over whether it’s better to believe that suffering is random or preordained are some of the major discussions that permeate this play’s runtime. These questions allow the play to linger in the mind, prompt more viewings, and provide thematic reasoning for choices in everything from acting to song choice.

This is a production that sticks with you due to its stellar acting, enhanced by the choices in the design that lead to visual and auditory motifs which contribute to the overall messages of the play.

J.B. was written by Archibald Macleish and the Mask and Bauble production of it was directed by Matt Philips (COL’ 22). It’s currently playing in Poulton Hall on Stage III between October 10-13 and 16-19 with every showing, except Sunday, October 13, starting at 8pm and lasting for a little over 2 hours. 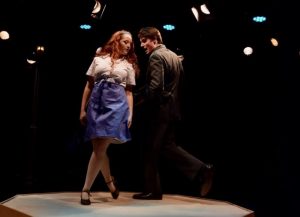