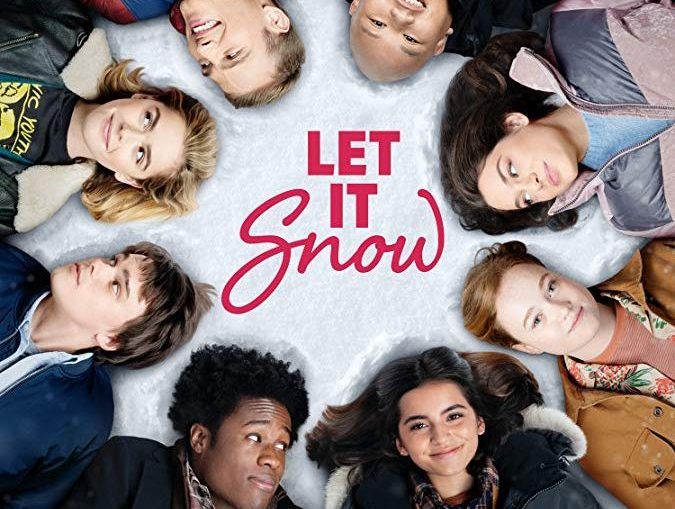 Let it Snow (2019) is the perfect movie to watch on a cozy Friday night after a long, stressful week—or a cozy, drunken Tuesday night after a long, stressful beginning of a week (like I may or may not have done). It’s a basic, cute, rom-com Christmas movie based on a book composed of three short stories by John Green, Maureen Johnson, and Lauren Myracle. The movie version came out on Netflix on November 8th, over a month before Christmas, but I am okay with that.

The feel-good film is set in the fictional town of Laurel, Illinois, and opens with cheesy narration about the power of snow, ironically delivered by Joan Cusack. “Snow can change the way you look at the world, or hide the things that are right in front of you,” Cusack intones to set the scene. It’s Christmas Eve, and by the end of the night, three different couples will come together in love stories tied up with neat, holiday bows.

The film stands out with marginally more complex male characters who occasionally challenge rom-com paradigms, but it ultimately fits right into a genre rife with problematic tropes.

First, we have Stuart Bale (Shameik Moore), a famous pop star, and Julie (Isabela Merced), who is being forced to make a decision between accepting an offer at Columbia and staying home to take care of her sick mother. The two meet by chance encounter on a train, and he follows her around for a day, getting a taste of her world and a break from his own.

Then, there’s Tobin (Mitchell Hope) and Angie (Kiernan Shipka), the classic “best friends turned more than friends” pairing, the tomboy and the nerd who eventually confess their love for each other. Their duo is characterized by clever, playful banter, but also the overarching question of why on earth they aren’t already together. It takes the introduction of a college boy interested in Angie to spark the jealousy that leads to their confession of mutual love.

And finally, there’s Dorrie (Liv Hewson), the nerdy, Harry Potter-loving waitress, and Kerry (Anna Akana), the popular dancer. The two have a magical, stay up all night talking hookup, but when Kerry later comes into the Waffle Town (for the purposes of the film, pronounced ‘Awful Town’ due to a missing ‘W’ in the sign) with her friends, she pretends not to know Dorrie. Dorrie makes a series of gestures including bringing over a “quaffle waffle,” a bunch of waffles shaped into the Quidditch ball from Harry Potter, which Kerry covertly smiles at but brushes off in public. Later, we learn that Kerry has yet to come out to her friends or family, which is why she’d been so dismissive of Dorrie.

On the periphery are characters like Addie (Odeya Rush). Addie spends most of the movie obsessing about a boyfriend who doesn’t seem that interested in her, eventually confronting him dramatically at Waffle Town. But, over the course of the film, she learns to value the friendships she does have, particularly the one with her best friend Dorrie.

The film has a few features that set it apart within the rom-com genre, namely some standout lines, challenges to traditional masculinity, and a refusal to demonize the “other man” character.

For example, Addie gives Dorrie a pep talk after a day of feeling rejected by the girl she’s interested in. “If you and Beyonce were trapped in a house that was on fire and I could only save one of you, I would let Beyonce die. And if somebody doesn’t see that, that’s not your problem because you deserve to be with someone who wants to shout from the rooftops how great you are,” Addie says. This scene also represents a forefronting of female friendships which commonly suffer at the hands of romantic plotlines in the rom-com genre. This movie balances both giving space for female friendship to shine and for happy romantic endings.

A prime example of the ways in which the film pokes fun at traditional, stoic masculinity is Tobin’s confrontation with a pair of bullies. Tobin attempts to intimidate them by claiming, “You don’t know me. Yeah, I went to piano camp. So? You know, I used to have a peanut sensitivity, but I beat it. Do you know how hard that is? Do you? Fear of raccoons? No. Couple of months of therapy and done!” In response, they don’t beat him up or antagonize him further in accordance with the tough-guy trope, but rather they find it funny and all start drinking together.

JP LaPierre (Matthew Noszka), the college guy who asks out Angie, is also not a dick at all. He’s just a nice guy who likes meditation. When Tobin is bullied, JP recognizes their behavior as uncool, and is nothing but respectful of Tobin and Angie’s friendship. As the duo urges Tobin’s old car to move faster in the snow by saying things like “Come on Carla! Don’t be a little bitch,” and “Yeah, Carla! Work that ass like I know you can!”, JP responds by saying, “Guys, I know it’s a car, but I’m also a feminist, so…”

Later, when Tobin and Angie finally kiss in the light of the Waffle House sign, Tobin asks if they can still hang out with JP because they both like him. JP is not portrayed as malicious, brutish, or rude like the “other man” generally is.

Despite its somewhat innovative aspects, the film relies on the same old stale plotlines to drive the action. Stuart and Julie’s meet-cute makes very little sense. Why is an insanely famous popstar riding the train by himself? Where is Julie coming back from? Why do neither of them have any luggage? And Julie relies too much on the “cool-girl” trope in their first interactions, insisting that she’s not interested in him so much that it becomes unbelievable. Also, the trope of the famous person who’s a human being “just like all of you” feels played out and unoriginal.

They open up to each other about their sad backstories, and they have one pretty cute dance scene in which Stuart imitates Mick Jagger’s swaggering walk. But all in all, the film doesn’t acknowledge the fact that Stuart basically follows Julie around all day despite her repeated attempts to leave him in the dust. They’re cute, and he’s attractive, so disregarding her initial moves to ditch him is totally fine right?

And don’t even get me started on Tobin and Angie. Angie’s the typical tomboy who is actually just a very attractive white girl wearing baggy clothing. Tobin nicknames her “the Duke,” which solidifies her place as “just one of the guys.” There is also so much sexual tension between the two, it’s ridiculous. It’s so entirely unbelievable that they got to the point of being high school seniors and haven’t gotten together yet.

When Angie confronts Tobin about his standoffish, jealous behavior in response to her bonding with JP, he delivers gems like “God, since when did you get so sensitive?” He also effectively gaslights her about the whole situation, asking why he would be mad at JP, denying his true feelings, and turning the blame around on her. He has never told her that he likes her, yet he acts like he is owed every scrap of her attention.

In the scene where they confess their love, Tobin claims that he’s in love with her but not “you know, in a traditional sense or anything.” But then he continues on to talk about how he thinks about her all the time and wants to share the rest of his life with her, which she rightfully points out as pretty traditional. When Angie said “It’s always been you,” literally every other romantic comedy ever produced rolled over in its grave. From a pair that had such solid banter throughout most of the film, I expected more.

Dorrie and Kerry’s storyline is the only one that feels slightly fresh. Dorrie gets her moment of confrontation where she tells Kerry she refuses to be treated like she doesn’t exist. And in turn, Kerry gets the space to explain herself in an honest, open way. Rarely ever have I seen a lesbian love story that is not overtly sexualized or catering to a male gaze. This story incorporates the pair’s identities in a way that is realistic, and features a cute, final kiss.

It feels like the makers of this film thought that casting “unconventional” (read, not necessarily all white and straight) actors for a few of the characters would somehow revolutionize what are just old, stale rom-com plotlines. The film relies too heavily on overdone tropes and falls into the genre’s most problematic, obvious traps: excusing jealousy or boundary crossing behavior in service of the larger love story. I’m all for greater representation in film, but diverse representation doesn’t automatically make an okay film good.

The movie ends on a fittingly cheesy quote: “Sometimes it’s not just the eve of Christmas. It’s the eve of everything, of the rest of your life. So even if it gets you stranded, or stuck in a snowbank, or makes you fall on your ass, sometimes you just gotta let it snow.” I’ll be honest, my drunk ass cracked up.