As Long as I’ve Got My Suit and Tie: Georgetown’s Implicit Dress Code 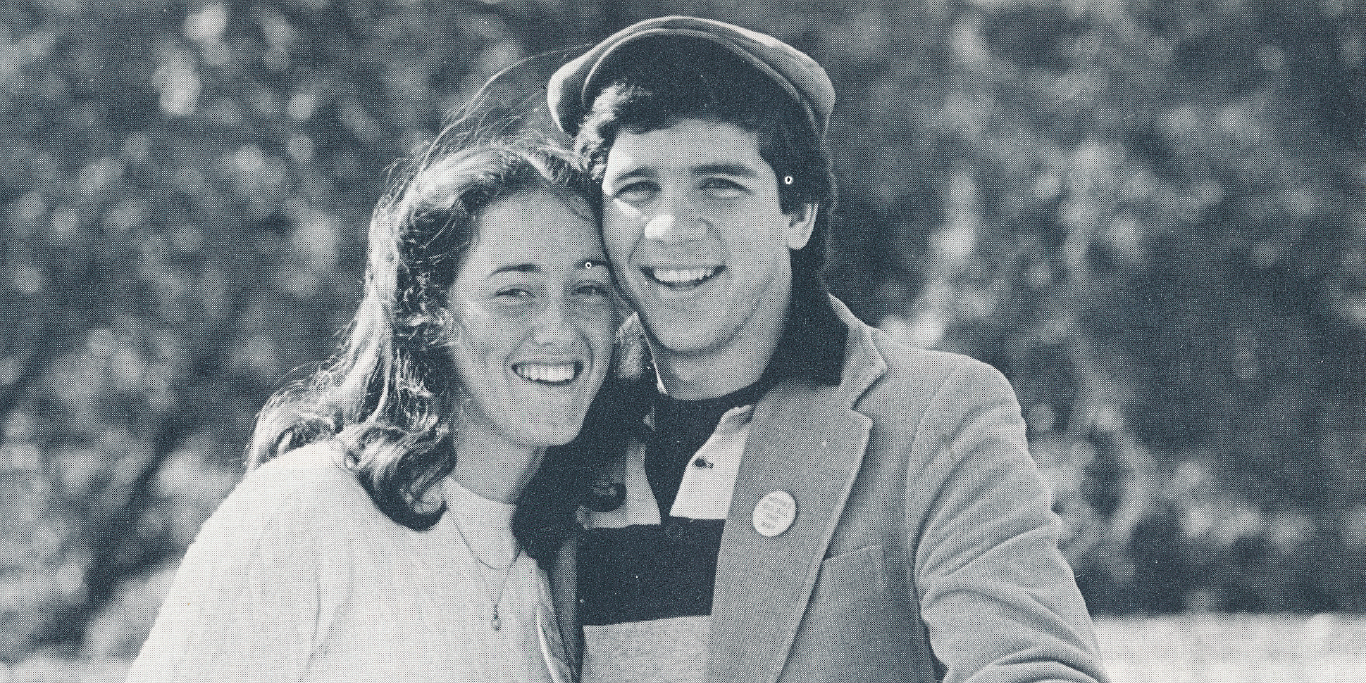 “Personal pride is an inherent quality of the weaker sex.”

These words feature in the 1962 Miss G handbook, Georgetown’s female Student Code of Conduct, which was the first introduction female students had to Georgetown’s dress code. This section, titled “Miss G Plans Her Wardrobe,” contains a full page and a half of fashion advice followed by a chart with wardrobe suggestions for occasions ranging from casual dates to evening tea. The university dress code at the time required gentlemen to dress in coats, collars, and ties.

After nearly 200 years, Georgetown’s dress code dissolved between 1966 and 1970. However, the legacy of the university’s formal style has persisted. An implicit dress code still influences students’ fashion choices today, which prompts students to choose whether to conform to or disrupt the status quo.

The Miss G handbooks encouraged women to fill their closets with skirts, blouses, blazers, and sweaters, along with a classy pair of flats or heels. The administration wrote that a basic wool dress was “a must” because it could be dressed up or down with some simple jewelry. For nursing students, the guidelines restricted excessive makeup and any nail polish that was not light or natural colored. Today’s handbook for students with clinical requirements has nearly identical language. Any deviation from these regulations led to questions from the administration.

“Failure to observe principles of good taste in regard to attire and good grooming will be considered as an indication that the individual is in need of counseling,” Miss G reads. In the handbook, Miss G was told to be thrifty, but she was also reminded that “the trend is toward somewhat dressier fashions than might be found on a campus not located in a metropolitan area.”

The rebellious 1960s made way for sweeping cultural changes at Georgetown that dismantled many of the university’s traditions, including the Miss G handbook. Although women had been attending the Nursing School since 1903 and were subsequently admitted to Georgetown’s other schools, it was not until 1969 that the College became co-ed.

The same decade saw the fall of The Yard, the College’s exclusive student government that was closed to students in other schools. In a 2004 Hoya article, Hoya Editor-in-Chief Josh Zunbrum (SFS ’05) details a 1968 confrontation between a young Bill Clinton (SFS ’68) and members of The Yard.

Zunbrum’s article, quoting Don Casper (COL ’70), said while the men of The Yard were wearing suits in compliance with their dress code, Clinton entered a meeting defiantly in a black leather jacket. Because he was an SFS student, he was not permitted to address the College’s student government.

However, Clinton does not remember this particular incident.“That’s got to be an urban legend,” he told the Voice while visiting the Tombs.

Urban legend or not, the 2004 article’s author believes the tale illustrates how students used dress code violations to challenge established ideas. “The suits became a symbol of all the things that people traditionally believed and were being thrown out in the 1960s,” Zunbrum told the Voice. “The idea that you had to wear suits in the Hoya office and the idea that you shouldn’t have women in the college and the idea that you shouldn’t protest the government on the street all tied together. And they don’t really have anything to do with each other, but they were just all the things that were believed by the students who were deeply traditionalist.”

Even after the official dress code had been abolished, Cynthia Paulis (MSB ’74), a former Voice staffer and one of very few women in the business school during her time on campus, remembers a consistent and neat style during her years on the Hilltop. She noticed a significantly less formal style just across town at George Washington University. At Georgetown, most women wore skirts or dresses to class; men wore khaki pants and nice shirts.

Wealth also played an important role in campus fashion. Paulis, who worked three jobs as a student, felt pressure to “up her game” when she saw how attractive and formally dressed many of her peers were. She recalls being amazed by the amount of money some students spent on things like clothes and cars. “I think they really kind of handpicked those students. They really came from a lot of the Catholic prep schools. There was a look that I think that they were really looking to achieve at Georgetown.”

Today, fashion at Georgetown is not as regulated by the university administration. Yet, Elizabeth Gleyzer (COL ’20) believes students still adhere to a few staple items. Gleyzer, dressed in a forest green knit sweater accessorized with dangly silver half-moon earrings, said comfort is the most important aspect of fashion for her. She loves bright colors and outdoorsy clothing but does not think many Georgetown students are as creative. In fact, she said, it is a stretch to even classify Georgetown’s general attire as “style.”

“My pet peeve about Georgetown’s fashion is that their sense of fashion is just wearing Georgetown gear. I’ve joked like literally I walk around campus and the only colors I see are blue and gray,” she said.

For Gleyzer, it’s possible the uniformity of dress on campus stems from Georgetown’s reputation attracting students mainly interested in politics, government, and law. In her experience, this creates a pre-professional culture not mirrored at other colleges.

“When I tried telling people in Berkeley about the fact that people here wear suits to class, they just about shat themselves,” Gleyzer said, laughing.

Former Voice Managing Editor Ian Bourland (SFS ’04) remembers a very different Georgetown  from the one Gleyzer describes. He recalls a strong countercultural movement among Georgetown students in the 2000s he believes was influenced by a broader shift in D.C. culture. Remnants of the ’80s punk scene thrived at the nearby waterfront, once the site of warehouse clubs, rock shows, and queer nightlife. M Street housed Smash!, one of Georgetown’s last record stores, until it closed in 2006. Up until 2010, Wisconsin Avenue was home to punk store Commander Salamander where customers could purchase band merchandise, hair dye, and rave clothes like baggy parachute pants and candy necklaces.

Bourland remembers Georgetown having a preppy aesthetic reflected in a Ralph Lauren-esque look of baggy-yet-stylish items like knit sweaters and jeans or chinos. But he and his friends stood out. He looked back on his crazy hair colors, band tees, and Doc Martens and saw his fashion choices as a way to express “independence of thought.”

Now an assistant professor in Georgetown’s Art & Art History department, Bourland has noticed a more homogeneous style in the way current students dress. He thinks Georgetown students in his era were less stressed than students are now, which he believes could factor into the heightened sense of professionalism in attire.

“I graduated before the recession of 2008. The economy was still pretty hospitable. We were coming out of the Clinton economy and in the early years of the Bush administration, so I think a lot of us were less worried about getting jobs,” Bourland said. “While we worked hard, and it was competitive, I think there’s a sense that you could have it both ways. You could be very rigorous scholastically. You could be part of extracurriculars. But there was a little more wiggle room to go out and enjoy the city, to be part of different communities.”

To Feli Songolo (SFS ’22), this flexibility is less common today. An implicit dress code lingers on campus, but fashion still serves as a way for members of the community to share their culture and background with the student body. A Congolese American who was born in Zambia, Songolo remembers that when he was accepted to Georgetown, people told him about how nicely students dressed here. He felt like he had to live up to a student-imposed standard in order to fit in.

“There’s that stereotypical frat boy dress,” Songolo said. “I think when you have a place where it’s not too diverse, you’re going to have a set standard of how people dress and look and express themselves.”

But these unspoken guidelines give him the impression that people aren’t able to express themselves, or might simply not try to. Songolo feels more connected to his Congolese roots than his American citizenship. One element of his culture’s fashion that he enjoys, in part because it can be tailored to fit any individual style, is African Kitenge, a bright and vibrantly patterned fabric.

“A huge part of being Congolese, I feel like for me, is being able to wear those clothes with pride,” said Songolo.

Songolo recently attended the SFS Centennial Gala, a black-tie event which required a full evening dress or suit, which he pointed to as an example of a time he felt he had to sacrifice his culture for Georgetown’s. While other students selected tuxes and ball gowns, Songolo wished there had been other options. He said that the event’s dress code, which asked for the highest degree of formal wear, did not make him feel welcome to wear his culture’s fashion. “There’s a specific kind of dress code that a specific community has.”

According to Songolo, some students at Georgetown are open to unique styles of dress. “People are very happy to see someone doing something different, and doing it in their own way,” he said. However, he believes others can be taken aback by looks they’ve never seen before.

Yasmine Salam (SFS ’20), co-president of the Arab Society on campus, says every student at Georgetown puts significant effort into how they dress. She sees the dress culture at Georgetown as very intentional, with each pocket of student life offering its own style.

Salam said her style is inspired by geometric shapes seen in Islamic architecture, and she gravitates toward certain patterns or color palettes, such as those of the urban landscapes of Morocco or Lebanon. In practice, she tends to wear mostly black and incorporates her culture into her dress through accents like the gold bangles on her wrists with Arabic calligraphy running their length.

In her experience, students have been very welcoming of fashion from other cultures. “Georgetown is pretty accepting to dress the way you want, and represent yourself the way you want,” she said. “The way that one can integrate a culture or identity into fashion may have limits, but it’s easy to do so within the norms of the university.”

“You can’t get away with anything, and I’m not like Carrie Bradshaw where I come in with like, three fur coats on top of each other and say it’s a day,” Salam said. “But I do feel like, because people do care about physical appearances here more than the average college, that you can get away with looking quite put together or you know, wearing some Arabic iconography or things like that, and people aren’t going to give you such weird looks.”

Today, a handbook like Miss G might advise students to wear pre-professional staples like blouses and slacks over t-shirts and ripped jeans. While the composition of the Georgetown student body looks different than it did in the ’60s and before, there remains a homogeneity in student dress that few choose to challenge.

“People here that would want to express themselves feel that constraint to do so,” Gleyzer said. “With anyone that’s different, it’s like just being your radical self is already a statement and rebellion in itself.” 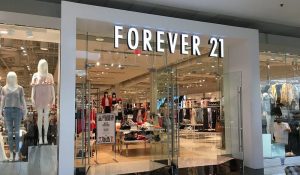 Crop Tops and Butt Slit Jeans: The Best and Worst Women’s Fashion Trends of the 2010s 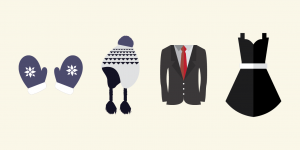 Disparity in Clothing Access in D.C. Can Make It Hard To Dress For Success