Violent riots unfolded in Delhi, India’s second-largest city, from Feb. 23 to March 1 as Hindu mobs attacked Muslim-populated neighborhoods and set four mosques ablaze, leaving at least 53 people dead. The riots were triggered after attacks on sit-ins against the CAA, which was passed by the right-wing ruling Hindu nationalist Bharatiya Janata Party (BJP) in December 2019. 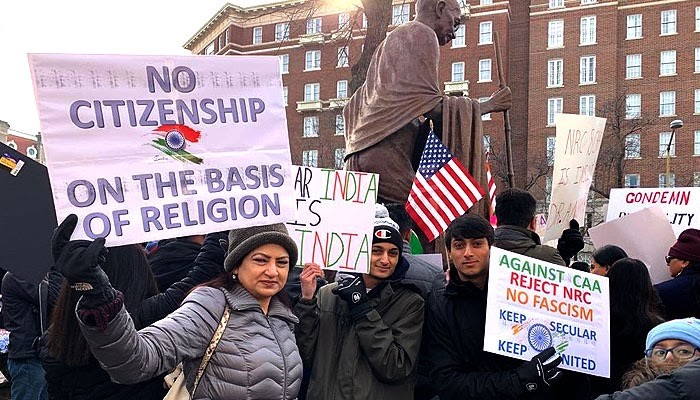 Indian Americans protesting against the CAA and NRC in front of the Gandhi statue in Dupont Circle                  Photo credit: The News International

The CAA expedites Indian citizenship for migrants from the three neighboring countries of Pakistan, Afghanistan, and Bangladesh, but it excludes Muslim migrants from citizenship. Opponents of the law argue that it violates the Indian constitution, which prohibits state-sanctioned religious discrimination. Many also fear that the CAA will be used by the Hindu nationalist government in conjunction with a National Register of Citizens (NRC) in 2020, which would allow for the deportation of Muslims who are classified as illegal migrants.

Anika Venkatesh (SFS’22), who grew up in Mumbai, argued that the two laws were crafted to disproportionately target Muslims. “Who is left over? Muslims. So who’s rendered stateless? Muslims,” she said.

Protests against the CAA and NRC have roiled the nation since last December, with violent crackdowns on demonstrators and college students in particular. Police stormed Jamia Millia Islamia University in Delhi on Dec. 15 and attacked largely peaceful student protesters with sticks and tear gas, leaving at least 200 injured.

Students from India broadly condemned the anti-Muslim violence in Delhi and expressed skepticism about the CAA and NRC. Venkatesh described the riots as a state-sanctioned pogrom against Muslims. “The police were very quick in consolidating under the government and going into Jamia University and shooting at students,” Venkatesh explained. “You’re telling me now they aren’t able to do their jobs and stand by when there’s a mob coming in? I think that’s nonsense.”

Even those who were generally supportive of the BJP, like Arjun Mehrotra (SFS ’20), lamented the growing violence in India and acknowledged that the bills were too divisive. “Are there things that should be done regarding immigration? Sure. Is this the thing that should be done? If you’re saying on a nationwide level, I’d say probably not,” he said.

Part of the reason why the CAA and NRC are so harmful is the legacy of colonialism, according to Associate Professor Shareen Joshi, who teaches international development in the School of Foreign Service. She explained that millions of Muslims live in Indian states with historically unclear borders and citizenship laws and would be disproportionately targeted by a national registry. “In districts that share boundaries with Pakistan or Bangladesh, there are large numbers of Muslims who may not have the requisite paperwork to prove that they were born in modern-day India,” she said.

Mubbashir Rizvi, an assistant professor of cultural anthropology who grew up in Pakistan, argued that the Indian government is using the CAA to disenfranchise Muslims and implement a form of extreme Hindu nationalism called Hindutva. “This goes to the heart of the larger project of Hindutva, which is to create India as exclusively a state for a Hindu and upper-caste normative idea of nationalism,” he said.

Describing herself as an Indian American who wanted to be more informed about the CAA and NRC, Tara Ravishankar (COL ’22) talked about her reaction upon learning that Hindu nationalism was used to justify the anti-Muslim violence in Delhi. “The way I learned about it at home and somewhat in school was: ‘Hindu nationalism is just kind of an idea; it’s not really having tangible effects,’” she explained.

“But it does—people are dying. It’s not just an ideology anymore.”

Ravishankar, who serves on the board of the Georgetown South Asian Society, detailed her perspective growing up with family members who support Hindu nationalism. “I’m privileged because I’m not living in India right now, and I might think differently if I live there because of the way my family leans,” she said. “But because I’m here, I don’t see this as a religious problem. I see this just as persecution.”

Rizvi emphasized the scale of the cross-class, multi-religious demonstrations against the CAA and NRC. “This is very telling that there is a wave of protest in an unprecedented way, that’s happening by communities who have been very quiet throughout the past five, six, seven years of BJP government,” he said.

“The entire culture of Indian democracy is under threat,” Joshi said.

Venkatesh went further, comparing the CAA to the citizenship laws of fascist regimes in the twentieth century. “I think it’s especially important for South Asians to speak up,” she said. “For a campus that prides itself on service to the rest of the world, this is a blatantly ‘papers, please’ law, quite similar to what happened to Nuremberg in the 1930s.”

Condemning the atmosphere of hatred toward Muslims, Venkatesh called on Indian students at Georgetown to stand up against the bill and the national registry. “The simple answer is decency, doing what’s right.”

Darren Jian
Darren is an assistant news editor and a junior in the College studying government and math. Some things he likes are tennis, indie rock concerts, and student debt cancellation.