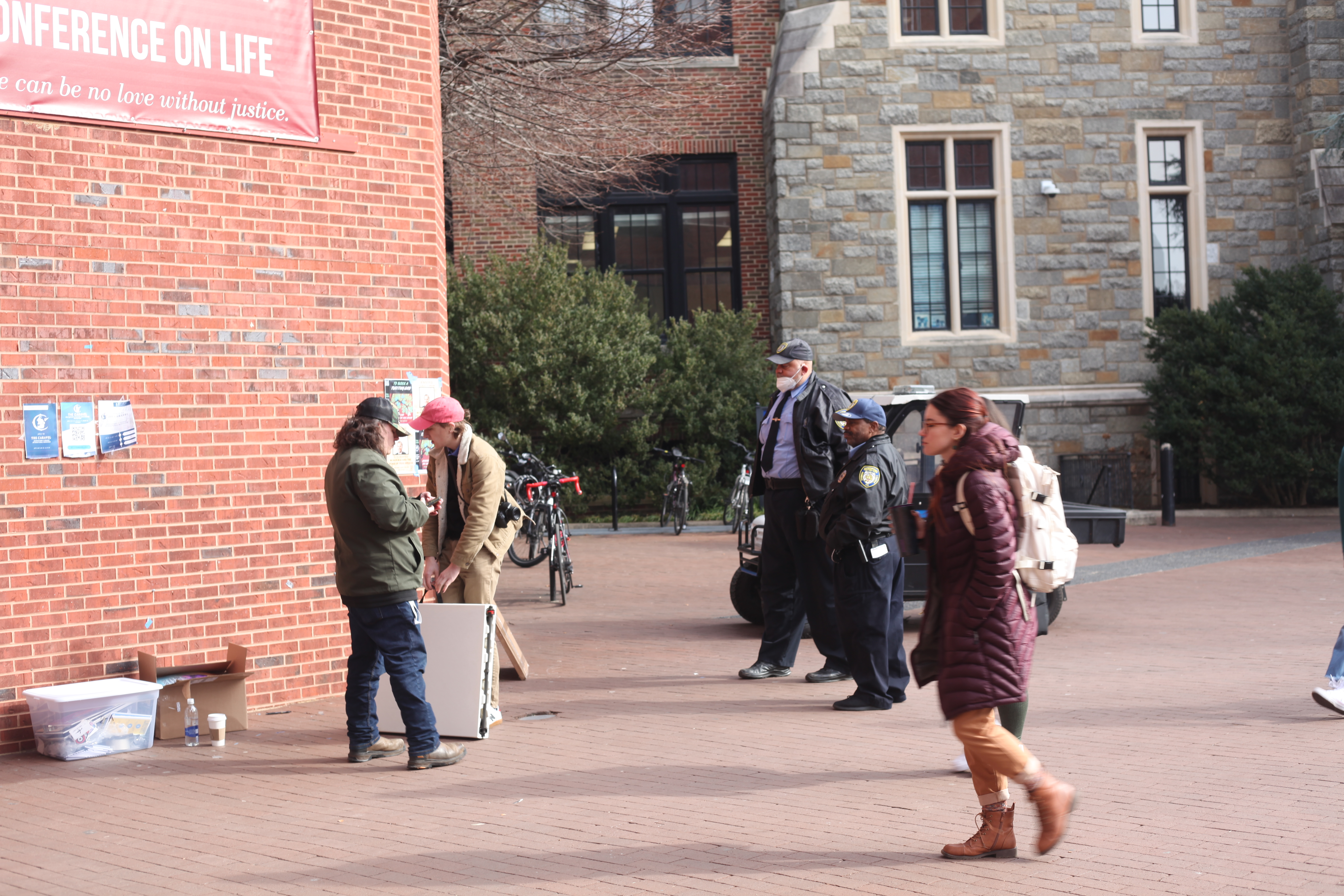 YAL tablers packing up after being asked to leave by GUPD. Photo courtesy of Graham Krewinghaus/Georgetown Voice.

Tuesday’s incident marked the second time recently that YAL solicited on campus in an unauthorized manner. According to one of the two men tabling on Tuesday, the organization previously set up a table at CAB fair—an event aimed at promoting Georgetown organizations to students within the community—on Jan. 20, and was removed due to a lack of affiliation with any Georgetown student organizations. On Tuesday, YAL’s table displayed a large banner with an image of a gun and the slogan “Come and Take It,” as well as another sign declaring “Print Guns, Not Money.”

Max Townsend, a freshman from Catholic University, was one of the men representing YAL at the Red Square.

“We believe that people, especially minority communities, need a right to defend themselves against oppressive governments, which we know exist, which we know are systemically racist,” Townsend said.

“One of the first things I told him was that it’s completely in poor taste,” she told the Voice afterwards. “Obviously I have my own prior experiences and beliefs surrounding gun violence and regulation, but I just think not even 24 hours off a weekend fresh with shootings, also it’s in the wake of a holiday that I personally celebrate [Lunar New Year], was just very distasteful.”

Tuesday’s tabling follows an extremely violent start to 2023. There have been “more shootings than days so far this year and more shootings than at this point in any year since at least 2013,” according to a CNN report. Last Saturday, a gunman in Monterey Park, Calif., fired at attendees of a Lunar New Year party, killing 11 and instilling fear of violence within the Asian-American community.

“To be honest, I kind of didn’t think about the timing,” Townsend said in response.

“I agree, the timing is poor, the taste is poor,” he later admitted, though he did not leave Red Square until asked to do so by GUPD.

YAL explained that the goal of their tabling was “to start chapters” by gathering information from interested students. Promotional material being distributed at the table describes YAL as “the largest and fastest growing youth liberty organization in the country.”

Nicolette Carrion (CAS ’24), the organizing director of Georgetown MFOL, helped set up a table on the other side of the Red Square to create space for discussion among those negatively affected by YAL’s tabling.

“I think it was very jarring for students to see,” Carrion said. “We have a very robust Asian American community, we have other communities that might have been affected by recent events, we have gun violence survivors at our school,” she said.

“So it’s really, really disappointing to see these people on campus, especially given that they don’t even represent who we are, and to see them push their platform on us, I think is not right. It just feels very insensitive,” Carrion added.

Carrion felt the need for MFOL to be present during YAL’s tabling. “We need to fight back every time, because they’re going to be there, even though they’re not necessarily representing our campus.” 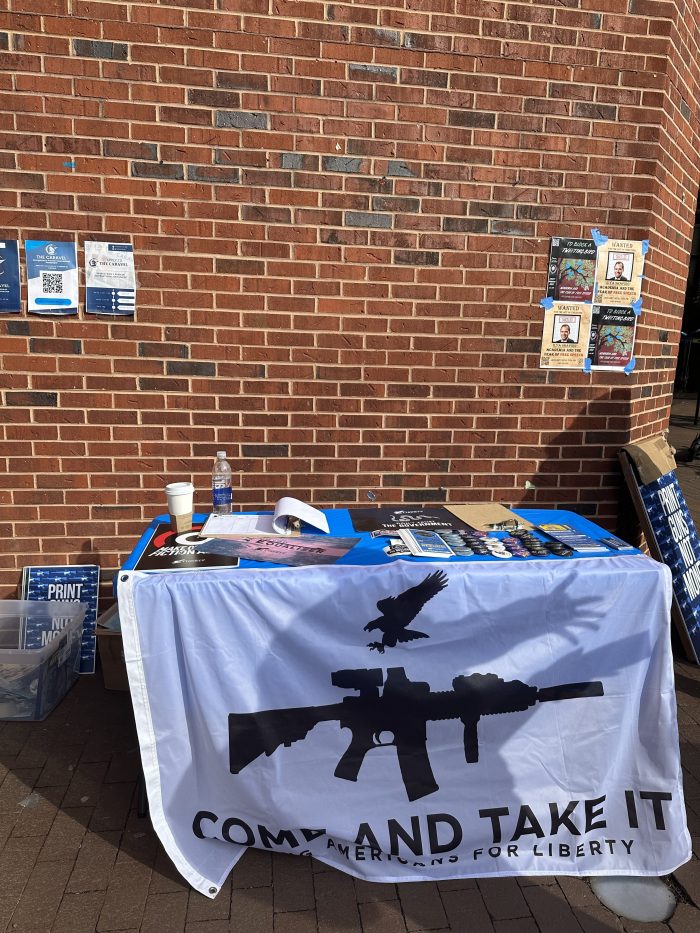 The YAL table in Red Square prior to it being taken down. Photo courtesy of Katherine Hawes/Georgetown Voice. 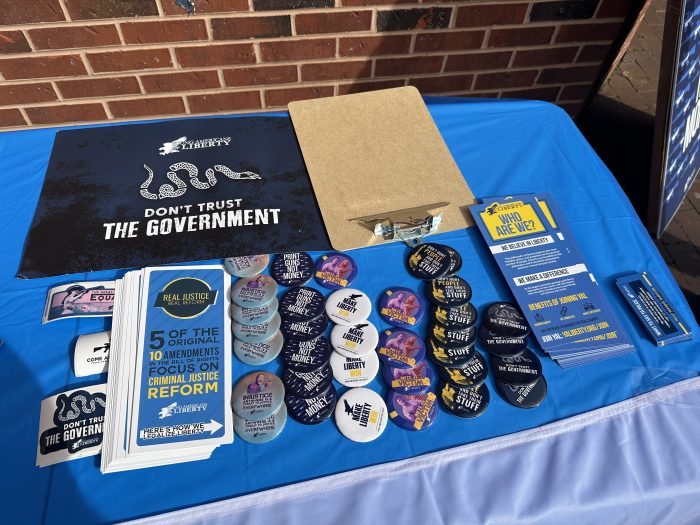 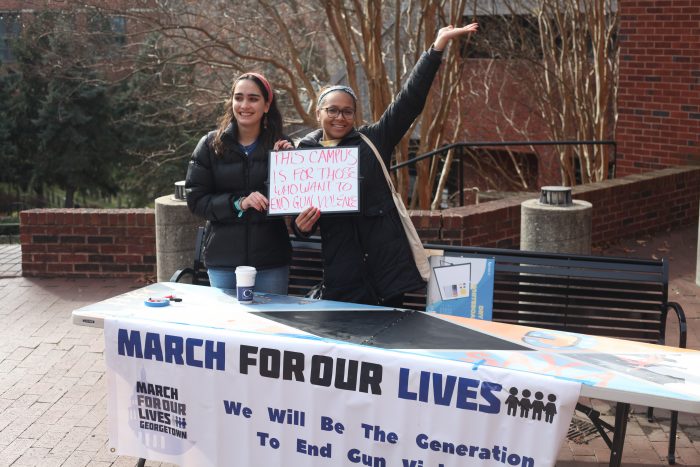 Two March for Our Lives organizers at the table they set up opposite the YAL table in Red Square. Photo courtesy of Graham Krewinghaus/Georgetown Voice. 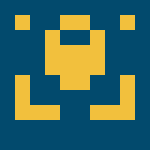 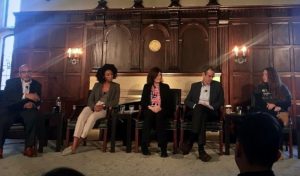