What the narratives around gun violence in D.C. get wrong 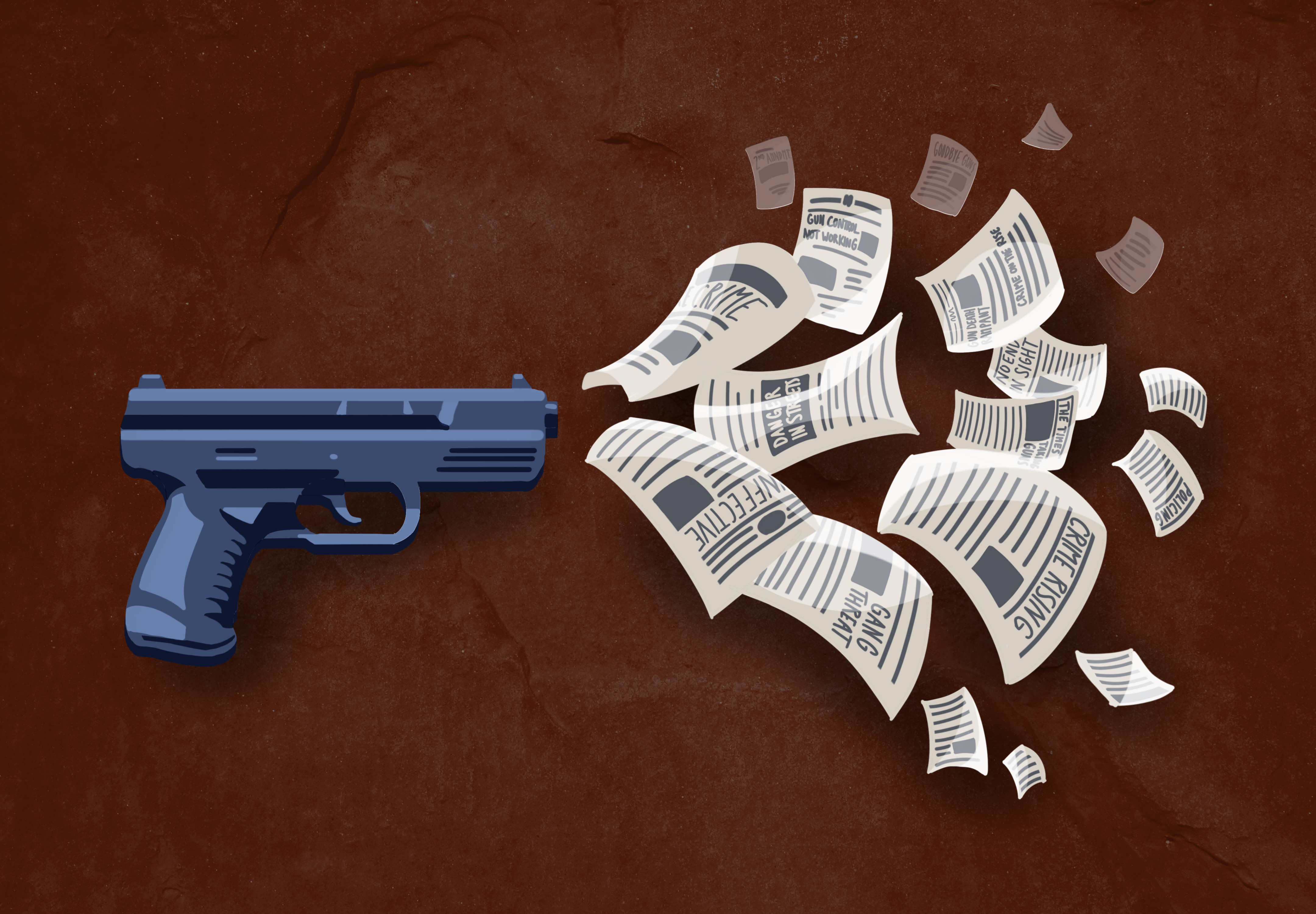 “I don’t watch the news,” Staley said. “My ear is to the streets. My office is in the community.”

Gun violence in D.C., as in many major cities, is a pervasive and major problem. To date, 2022 has seen 140 more violent gun-related crimes compared to the same period last year, though violent crime as a whole has risen by just 2 percent. While known as one of the most critical issues in the District, narratives around gun violence in D.C.’s media and Georgetown’s student community are often flawed.

“Pretty much everything is wrong,” David Muhammad, director of the National Institute for Criminal Justice Reform, said in describing myths around D.C. gun violence. He finds media narratives that paint the problem as out of control and unsolvable frustrating.

Media coverage of gun violence in D.C. has mainly focused on the misconception that gun violence and crime are rising rampantly, despite evidence that the overall crime rate has not risen since last year.

Gun violence in D.C. primarily occurs in Wards 7 and 8. Due to a combination of racist public policies, D.C. is the 15th most segregated metro area in the U.S. Wards 7 and 8 are both over 90 percent Black, meaning that gun violence primarily affects D.C.’s Black residents.

This reality, combined with a perceived rise in crime, contributes to racist narratives that paint gun violence in the District as exclusive to Black neighborhoods. The truth is that gun violence in D.C. is more complicated and preventable.

According to Muhammad, gun violence in the District is not as widespread as it’s portrayed.

“Gun violence in Washington, D.C. is very tightly concentrated on a small number of people who are at the very highest risk,” he said. “At any given time, there’s probably only about 200 to 250 people in the District with these series of risk factors at one time.”

Muhammad notes that this set of common risk factors—including the age range of 25-27 years, past involvement with the criminal justice system, and being recently impacted by a shooting—are key to the solution to gun violence. “The violence is predictable, and therefore it is preventable,” he said.

According to Alysha Orbach (SFS ’23), former director of March for Our Lives D.C., this understanding stands at odds with the notion that gun violence in D.C. is driven by gangs, a key misconception held by many residents and media organizations.

At ACM, Staley works to prevent violence in D.C. through initiatives like the Credible Messenger Program. The Credible Messenger Program focuses on mentoring youth convicted of felonies to help them mediate conflict in their lives, heal, and achieve personal goals. ACM has also developed a violence prevention manual with American University. In 2020, the organization brokered a truce in the Washington Highlands neighborhood, which led to 124 days without a shooting in that neighborhood.

Muhammad made clear that this violence—and its solutions—have to be viewed in the historical context of slavery, wealth deprivation, and systemic racism in the United States. “Not only is it a small percentage of Black people that are involved in violence, but nearly all of them come from these neighborhoods that have been suppressed and oppressed deliberately over decades through structural racism,” he said.

Understanding the context of this issue is the only way to properly address it. Staley knows this firsthand—most of the folks who work as Credible Messengers at the ACM were formerly incarcerated, often for gun-related crimes. He emphasized that ACM is very focused on providing violence intervention that is suited to the cultural context of the communities where the violence is happening.

“We’re changing a cultural norm about what conflict is,” Staley said.  “And that’s how we’ve been able to have no shootings for 11 months in the same place that was the host of D.C.’s last mass shooting.”

Despite its proven benefits, not everyone sees this kind of investment as effective.

Many people in affluent majority white spaces, like Georgetown and its surrounding communities, frame policing as a solution. Local lawmakers often push for policies that represent these attitudes. Ward 2 Councilwoman and Georgetown grad Brooke Pinto (LAW ’17), for example, is in favor of hiring more police officers and has not supported reducing the MPD budget. Muhammad sees this as an ineffective strategy driven by fear and racism rather than data.

“It doesn’t make any sense because some of the best police departments in the world right now only have about a 60 percent homicide clearance rate, meaning they solve six out of every 10 homicides.” he said. “So even if we’re going to do all enforcement as our strategy, that’s still not going to get you there. And it’s only after the fact. It’s not stopping violence.”

At Georgetown, narratives around gun violence may suggest it is unrelated to residents in the area or a rapidly growing threat. Both are incorrect.

Ari Kane (COL ’24), former political director at March for Our Lives Georgetown, agrees. MFOL sees GUPD policing as a force that often makes students—particularly students of color—less safe. To them, the existence of a private police force on campus creates the threat, however unlikely, of gun violence via police for students of color on campus.

“We believe that police violence is gun violence,” she said. “Georgetown needs to reimagine policing and violence prevention on its campus.”

According to Muhammad, the District should be shifting resources toward targeted interventions and away from increased policing and carceral solutions. He argues that up-front, prevention-focused investment is not only the quickest way to immediately prevent deaths, but for those worried about resources, it’s also the most cost-effective way.

“Some people say: ‘You want to put money into a 24-year-old gang member with seven previous arrests?’ And it’s like, ‘Yes,’ because you’re spending almost two million dollars in government spending in response to a shooting,” he said.

Gun control fits into the puzzle of prevention as well. Gun safety measures, however, can take years to impact rates of gun violence, but data proves that they work. Muhammad explained that a lack of understanding of this chronology skews the narratives about what are considered effective solutions.

“Gun safety is incredibly important, but we need to understand the timeframes,” he said. “People claim: ‘Oh that doesn’t work or this doesn’t work, or we shouldn’t invest in this, and we should just lock everybody up.’”

Kane also pushed back against criticism of gun safety measures as a deprivation of Second Amendment Rights. While contemporary gun safety legislation increases requirements to own a firearm and doesn’t infringe upon the Second Amendment, gun control measures were originally situated as Reagan-era laws that sought to prevent Black men—specifically the Black Panther Party—from owning guns. “The whole narrative of gun control versus gun safety actually stems from laws that were originally weaponized against people of color. And that is not how we want to operate,” Kane said.

Muhammad also argued that additional policing in Georgetown is not necessary. “It is just not true that gun violence is everywhere, or that everybody is involved and that it’s a problem that can’t be solved,” he said. “A Georgetown student has nearly zero percent risk of being shot. Especially if they stick to the areas in and around Georgetown.”

Even in the rare instances where violence or the threat of violence occurs on or near campus, it is seen as extraordinary and Hoyas have an array of mechanisms to keep them safe, including HOYAlerts and GUPD—resources unheard of for D.C. residents in Wards 7 and 8. Additionally, mass shootings—despite representing a small percentage of gun violence—remain front of mind for many students. While the overall threat of gun violence is low, the issue is a serious problem and deserves the attention of every Hoya who calls this city a temporary home.

“We fly in, we drive in, but we’re there for eight months out of the year,” said Orbach. “I know we always talk about the Georgetown bubble and how you have to get out of it, and how it’s super hard to get out of it. And I think that’s a little bit of a cop-out.”

Orbach sees students often taking an approach of avoidance regarding the issue. For example, they refuse to visit certain neighborhoods seen as “sketchy” or “dangerous.” Campus news organizations also often fall short in their coverage. The Voice has no more than fifteen articles tagged “gun control” or “gun violence”.

She does think the Voice has aimed to equitably cover the issue, but still finds flaws with some of the reporting. “I think we’ve been decently good at addressing underlying causes,” Cuccia said. “The fault in our coverage is mainly that it’s been pretty baseline, relying on numbers.”

Narratives merely rooted in numbers inflate fear and make finding effective solutions and resources much more difficult. But as awareness around why approaches like increased enforcement are ineffective grows, innovative solutions emerge.

Amy Lopez, who is the deputy director for the D.C. Department of Corrections and helps administer the Lead Up! Program knows this all too well. She recently helped implement a project based learning initiative which asked incarcerated people to develop solutions to gun violence. It’s the first initiative of its kind.

“In the U.S., we don’t consider prisons a source of positive solutions. Just somewhere where we stick people away and hope that if we’ve given them enough punishment, they’ll mend their ways,” Lopez said.

Direct narratives from impacted people is, to Lopez, critical. “Our students, especially the young ones, were telling our audience they had guns because they felt like they had to have them. If you don’t have one, you’ll get shot,” she said. “To hear that from the people that are holding the gun is pretty impactful.”

Lopez believes that these perspectives need to be paired hand in hand with data driven violence prevention solutions. In that vein, she sees academic institutions as responsible for generating productive solutions for these kinds of problems.

“I think if any institutions in this country could come up with solutions, it is higher ed,” Lopez said.

“There needs to be a partnership with non-profit organizations and the schools in the cities that they live. Let’s be frank, the schools are in locations where violence interrupters help assist with public safety,” he said.

Georgetown University currently engages with some gun violence prevention efforts and is a founding member of the new 120 Initiative, which gathers experts from educational institutions to create actionable solutions to gun violence in the United States.

Yet it could be doing more. On Georgetown’s campus, gun violence is often forgotten or misconstrued, and in their time on the Hilltop, the vast majority of students will never engage with the communities that experience this issue—a factor that surely contributes to institutional and personal ambivalence.

“I do think it does come upon the student body to say: ‘What’s happening in the community that I live in?’” Orbach said. 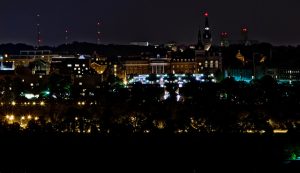