When I first listened to Dua Lipa’s self-titled debut album, its opening lyrics made me swoon. Lipa starts the song “Genesis” with, “In the beginning, God created Heaven and Earth / For what it’s worth, I think that he might’ve created you first.” Throughout every endearing pop song on Dua Lipa (2017), the singer conveyed playful quirks and relatable vulnerabilities through her lyrics. While some might not have considered her messages to be especially profound or word choice to be exploding with wit, Lipa’s lyrics always carried some semblance of personalized flair. They almost never strayed into the enticing abyss of manufactured pop numbness. This trend, unfortunately, does not carry over to Lipa’s sophomore album, Future Nostalgia (2020).

Released on March 27, one week earlier than scheduled due to a leak, Future Nostalgia’s sound is sleek and sexy (yes, almost like the fancy car on the album’s cover). With ’80s-inspired tracks chock-full of driving and plucky bass riffs, the LP has a clear vision and undeniable danceability. While Lipa has expertly honed her musical production, however, the end result feels drained of originality. The album’s nearly relentless sonic cohesiveness and uniformly bland lyrics cause many tracks to simply blend together.

Lipa’s strongest asset has always been her richly deep voice, and Future Nostalgia aptly makes sure to accent this while still leaving room to showcase her vocal range. When Lipa sings the titular lyric “Goddamn, you got me in love again,” in “Love Again,” her firm, falling lilt conveys a cool sensuality. One track that robs Lipa of this effect, however, is the album’s lead single “Don’t Start Now.” In this song, the chorus uses precise editing to clip the ends of her words. While this is supposed to create a sense of bounce and speed, the result is anti-climactic. Ultimately though, most songs successfully give Lipa’s voice center stage, even amidst their frantic energy.

One of the album’s most promising elements is its commitment to the dance pop genre. While this can sometimes make songs blend together, those that are done well are really well done. “Break My Heart” shows off Lipa’s upper range as the low bass and electric guitar follow her vocal melody at the start of the chorus: “I would’ve stayed at home / Cause I was doing better alone.” This effect does a great job of shifting the song’s soundscape, allowing for a playful build-up to the rest of the more traditional chorus.

Another dance pop standout is Future Nostalgia’s second single, “Physical,” which features an infectious synth hook as Lipa embraces the song’s not-so-subtle sexual undertones: “Lights out, follow the noise / Baby keep on dancing like you ain’t got a choice / So come on…Let’s get physical.” The hyper-charged bop will make for a great concert performance—it’s nearly impossible not to dance to.

Other songs, however, sink into mediocrity. It’s hard to tell the difference between “Levitating” and “Hallucinate.” They’re both fun and forgettable. Both come across as filler, nudging the album closer to the 40-minute mark. If there is one unfortunately notable thing about “Levitating,” it’s the banality of the track’s chorus: “I need you all night, come on, dance with me.” Especially given that it immediately follows “Physical,” the song is barely distinguishable in any aspect: Did you know that Dua Lipa wants you to dance with her?

An incredibly welcome break from this monotony is “Pretty Please.” Beginning with Lipa’s softer vocals over a noticeably sparse backing of snaps and a bass riff, the song continuously builds instrumentally. Complimenting the sultry, yet relaxed nature of its lyrics (“Put my mind at ease / Pretty please”) the song does not rush into itself. Instead, percussive and melodic instrumental layers combine and separate, creating a rich sonic texture. In addition to this interesting feat, the lyrics even have some wordplay: “Oh you look so pretty, please.” By the end of the track, the mixture of warm tonal synth notes and choppy electric guitar could easily resemble the instrumentals of a song from The 1975. Lipa experiments with a new sound here, and it really pays off. Hopefully, she will do this more on her next album.

While Future Nostalgia’s last two tracks also depart from rigid dance pop, this is not necessarily for the best. From its title, “Good In Bed” would appear to offer a more upfront take on the sexual energy already infused in many of the other songs. However, for a song about sex, this one sure is unsexy. With an incessant piano riff running throughout, the chorus devolves into garish-sounding repetition, ending with, “We drive each other mad, mad, mad, mad, mad / But that’s what makes us good in bed.” This is a song you can skip.

The album closes with “Boys Will Be Boys,” a critique of modern rape culture. A jarring change from Future Nostalgia’s other tracks in terms of subject and sound, the song backs Lipa’s vocals with a chorus of voices and sweeping strings. Lipa sings the poignant, “Boys will be boys / But girls will be women,” to demonstrate double standards relating to accountability for sexual assault. It’s important that this song exists, but there is no denying that it certainly does not fit in with the rest of the album, making it a smart and necessary choice on Lipa’s part to put it last.

Overall, Dua Lipa has set herself up for an absolutely rave-like tour. While Future Nostalgia is definitely a fun album, its lack of originality means that listeners have lost a part of Lipa’s artistry. Achieving lyrical depth doesn’t necessarily depend on writing slow songs about heartbreak. Tracks on Lipa’s previous album showed flashes of earnest sweetness (“Genesis”), self-discovery (“New Love”), and quirky positivity (“Blow Your Mind”). In Future Nostalgia, though, we are told to dance and not do much else. Many of the lyrics in Future Nostalgia exist to express Lipa’s sexual desires. It’s empowering and inspiring to see Lipa owning her sexuality as a woman. However, there’s no reason why this change in subject needs to come at the expense of lyrical originality. The next time I hear a song from this album played out loud, it’ll probably be several months from now in an H&M fitting room. But when I do, I will definitely start dancing. 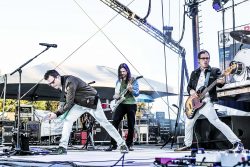 Critical Voices: Pinact, The Part That No One Knows