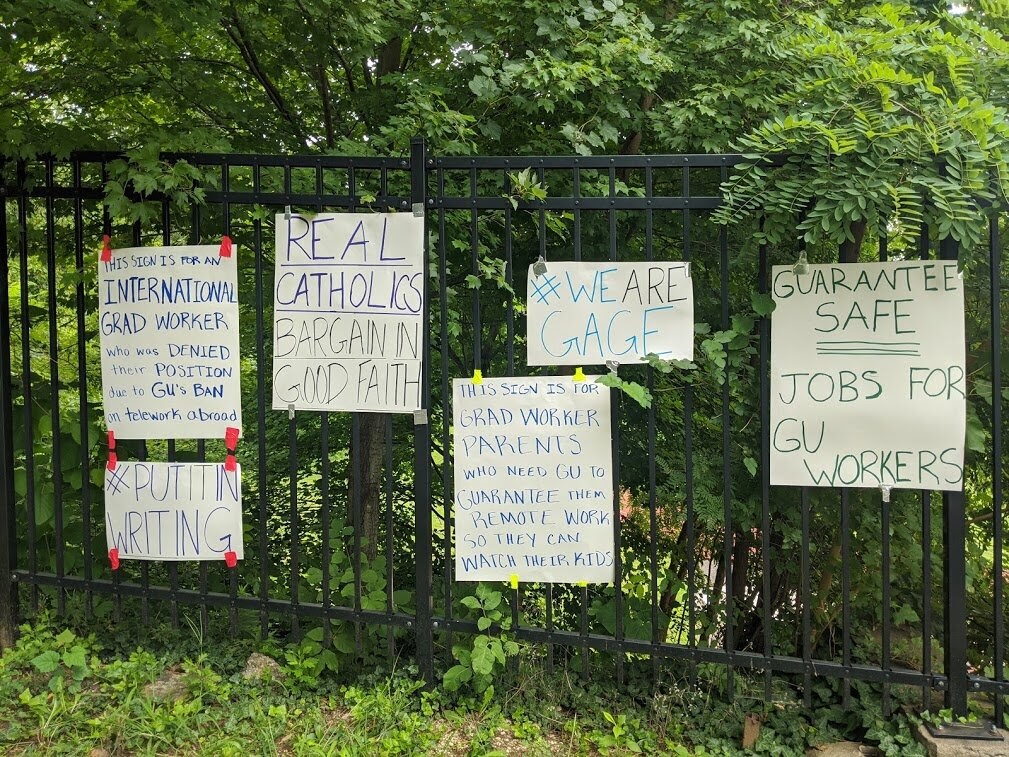 The Georgetown Alliance of Graduate Employees (GAGE) announced that it was pursuing arbitration with university administrators over bargaining disputes regarding COVID-19 protections for graduate workers on Sept. 18.

Arbitration is a process through which workers and employers use a third-party arbitrator to resolve a dispute over the interpretation of a collective bargaining agreement, in this case, the union contract signed by GAGE and the administration in May after a year and a half of negotiations. In mid-July, GAGE entered impact bargaining meetings with the administration over its Fall 2020 reopening plan, a plan which many union members saw as inadequate when it came to protections for graduate workers and international students.

“We demanded this impact bargaining because we thought it was important,” said GAGE organizer Jeremy Canfield (COL ‘19, PHD ‘26). “We demanded it because it is something in our contract that we have the right to do, and so the university administration refusing that demand is a violation of our contract.”

For months, graduate workers have continued to engage in activism and protest the administration’s reluctance to engage in the bargaining process or commit to a letter of agreement, a legally-binding document holding the university accountable for implementing any agreed-upon demands. In August, GAGE held a rally in front of President John DeGioia’s house calling for a letter of agreement, and last week, members participated in a teach-in with Black activists to demand racial and economic justice at Georgetown.

According to Ari Janoff (PHD ‘24), the union’s grievance officer, the administration simply stopped negotiating with GAGE altogether by the beginning of the fall semester. “We joined the meetings thinking that they were bargaining with us and they allowed us to believe that for a while. When it became clear that they weren’t willing to come to a letter of agreement and weren’t willing to come to any type of written agreement with us, they maintained that they never said that they were bargaining and then they unilaterally ended meetings,” she said.

“Everything that we saw from them this summer indicates that they never intended to bargain with us at all.”

In an official statement announcing the arbitration, GAGE President Jewel Tomasula (PHD ‘24) and Vice President Daniel Solomon (PHD ‘25) said the university administration was violating the union contract by refusing to bargain a COVID-19 agreement. “The administration continued to insist they are not obligated to bargain with GAGE on these issues,” they wrote.

GAGE is seeking a process of expedited arbitration with the university due to the urgency of the situation facing graduate workers. Normally, arbitration involves continued hearings and witnesses from both parties and has no time limit to the process. “Unions across the country have seen this process take up to a year. Obviously the COVID-19 pandemic is happening right now, we can’t wait a year,” Janoff explained. With expedited arbitration, “instead of having these hearings and the witnesses, it limits it to being documents only.”

In an email to the Voice, a university spokesperson said GAGE members and the university have discussed all of the issues mentioned by GAGE organizers.

“Georgetown is currently responding to GAGE-AFT’s concerns through the grievance process and continues to make efforts to resolve this matter short of arbitration,” they wrote.”The University is committed to honoring all of these provisions. Georgetown continues to work with GAGE-AFT in good faith.”

Canfield highlighted the importance of taking a stand for the graduate workers who devoted countless hours to ensuring the passage of GAGE’s union contract. “We think it’s important to protect our members in this moment, but also to make it clear that we are going to ensure that this contract that we fought so hard for is going to be enforced and that the administration respects it,” he explained.

This sentiment was echoed by Tomasula and Solomon, who argued that the arbitration was necessary to ensure that future bargaining sessions would be honored by the university. “If the administration believes that GAGE doesn’t have the right to bargain over the impacts from changes due to an unprecedented global crisis, when would they ever believe that we have the right to do so? We cannot abide cynical and disingenuous attacks by the administration on our right to collectively push for safe and appropriate working conditions,” they wrote.

GAGE’s responsibility to fight for an equitable COVID-19 response is larger than ever, according to Canfield. “When the administration makes sudden, poor decisions, it’s international students and workers, students and workers with disabilities, and many other vulnerable members of our communities who have to bear the brunt of those decisions,” he said.

This article was updated to include a more recent statement from the university.

[…] previously announced it was pursuing expedited arbitration with the university over ongoing bargaining disputes on Sept. […]