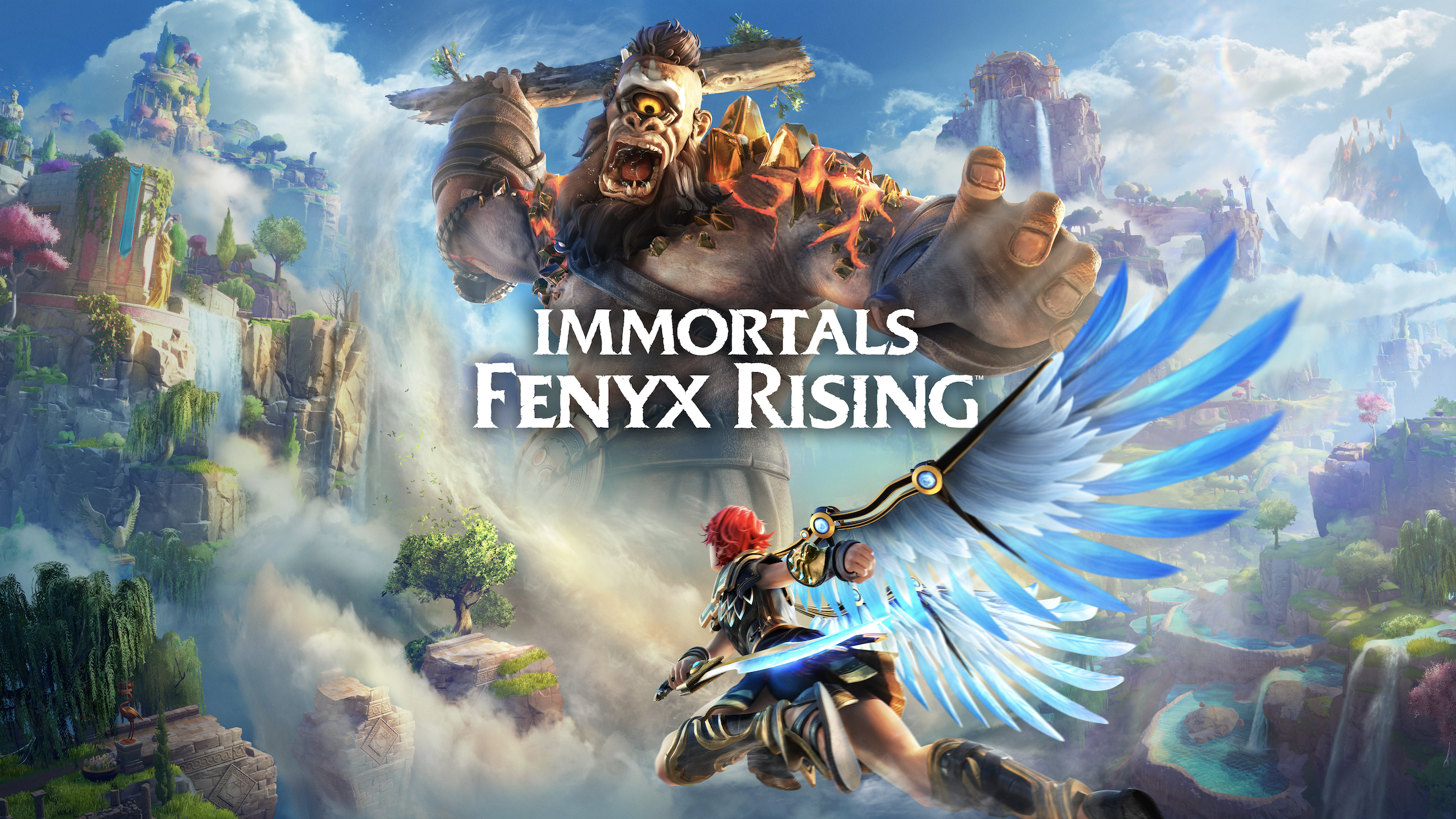 Romping through Ubisoft’s gorgeous fantasy world and contending with ancient Greece’s most formidable mythical beasts is an enjoyable experience to try out in the post-holiday lull. I just wish I could say it was a little more engaging.

Immortals Fenyx Rising (2020) is an open world adventure game developed by Ubisoft Quebec and released on Dec. 3 on all major gaming platforms. The player takes control of Fenyx, an unlikely hero tasked with saving the Greek pantheon from the evil Typhon and stopping his plan to usurp Zeus’s throne on Mount Olympus. The title wears its influences on its sleeve—the game borrows heavily from Nintendo’s 2017 hit The Legend of Zelda: Breath of the Wild, and its mythical theme is a love letter to the French Canadian studio’s previous title, Assassin’s Creed Odyssey (2018). While conceptually Immortals innovates upon its inspirations enough to provide something fresh, the game’s controls and general execution sometimes stumbles, not quite capturing the immersive magic players associate with the genre’s best.

For most of the game, the player will spend time traversing the Golden Isle by running, jumping, climbing, and gliding their way across the vibrantly colored landscape. The destination, however, is theirs to decide—after a short introductory sequence, Fenyx will have acquired all of her abilities and the player will be free to trek their way toward any landmarks that draw their interest. During travel, Fenyx will encounter a varied cast of enemies: Typhon’s generic soldier baddies, but also griffins, medusas, minotaurs and more with whom to do battle. 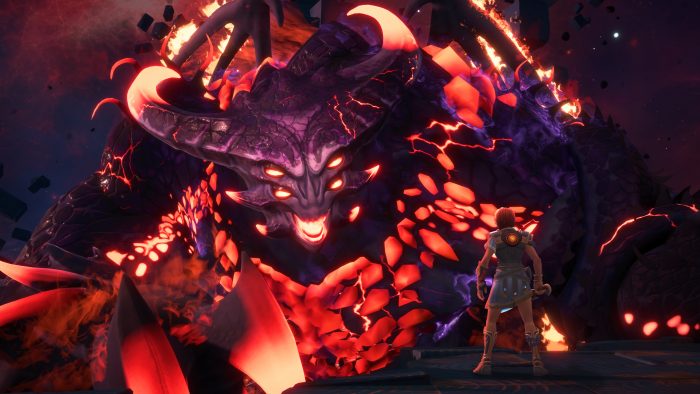 Players will face off against Typhon, the evil titan who has escaped Tartaros and is trying to conquer the Golden Isle.

Conceptually, Immortals’s structure works well. Through exploration, the player will come across different challenges, testing their combat and puzzle solving skills, and in exchange they will receive rewards for their feats. They may climb to the top of a mountain or shoot an arrow Odysseus-style through a series of axe handles to receive upgrades and rewards. The Golden Isle is even dotted with small puzzle chambers, called Vaults of Tartaros, which each contain a treasure chest and upgrade Fenyx’s stamina, allowing her to cross the map even more quickly. The vaults also act as landmarks to which the player may warp at any time from their map—again, if you’ve played Breath of the Wild and completed any of its Sheikah Shrines, you’ll understand the rhythm of these challenges already.

Beyond the gameplay loop, Immortals’s world is wonderful. Playing the game on Nintendo Switch, I rarely experienced any obtrusive drops in framerate, and colors burst from every vista. While the graphical fidelity is slightly compromised to run on the less powerful hardware, as is the case with most cross-platform releases, the cartoonish yet grand style still pops on the television screen. The views on more powerful platforms like the Playstation 5 and Xbox Series X are sure to be even more stunning.

Unfortunately, this is where some of Immortals’s missteps start to appear. While the world itself is beautiful, Fenyx and the many characters she encounters on her journey are less so. The character design is good and fits with the cartoonish aesthetic, but the awkward animation leaves many scenes, especially those focusing on facial expressions, feeling lifeless and confused. On top of this, story sequences occasionally have pauses between lines of dialogue which extend just a little too long to not be noticed, giving the experience a slightly cheaper presentation than would otherwise be the case.

On their own, mild animation troubles would not be nearly enough to degrade the experience. The greater issue lies in how it feels to control Fenyx as she dashes around the landscape. Her normal movement is mostly responsive, but the contrast between the swift dashing speed and slow, arduous climbing gives the game a stunted sense of momentum. There are movement upgrades that can be unlocked partway through the experience, such as a short climbing jump, but the abilities do very little to mitigate the disparity between horizontal and vertical speeds. Similarly, gliding feels clunky to control whenever challenges like the Vaults of Tartaros demand the player does so with any sort of precision. Testing a player’s mastery over controls is fitting when the mechanics of those controls have depth and room for intricacy, but expecting the same when character movement isn’t as refined is a recipe for frustration.

Immortals’s combat system has similar pitfalls. The attack controls are responsive, and landing blows on the game’s enemies feels impactful, but there’s simply not that much depth. To be clear, depth and options are not the same. The player can do various things in combat, like dodge, parry, shoot arrows, and choose between light and heavy attack combos, but the game doesn’t present many reasons to actually make the choice. In my experience, most combat encounters boiled down to using heavy attacks, dodging, and repeating until the baddies fell over.

I’m not looking for a Dark Souls (2011) level of precision—God knows I’m not good enough at any game to even be allowed to request that—but some sort of game mechanic to spice things up would have really lifted the experience. Breath of the Wild’s solution, for instance, was to give weapons limited durability, forcing the player to improvise with split-second decisions when their rusty sword or wooden club broke mid-battle. It’s not that the combat needs to be more difficult. I just want the game to demand me to think more instead of allowing me to mash the triggers on the controller and occasionally move out of the way.

This game’s biggest flaw is just that: it often doesn’t require the player to think very much about what they are doing. The aforementioned puzzles are fun enough, but many of them are variations of only a few types of tasks: sliding tile puzzles, memorizing patterns, or putting objects on buttons and into slots. Once the player has done a handful of each, completing yet another for a predictable reward can be monotonous. The feedback loop of fighting enemies, doing puzzles, and getting upgrades is there and does work, but it also gets old pretty quickly and rarely requires much presence of mind. For some players, maybe going on autopilot in a pretty-to-look-at landscape is exactly what they need, but I was hoping for something more.

Immortals Fenyx Rising could have been a very strong title for Ubisoft, and for some, it likely will be. It’s a step away from long running, realistic open world franchises like Assassin’s Creed and Far Cry, and that creative leap is exciting and welcome. But taking that kind of step also means reconsidering the mechanics at play, and finding a definitive answer as to why a player should spend their time here rather than elsewhere. Immortals gives players things to do, but completing those tasks doesn’t require that players engage much with the game’s systems, nor does it make the act of engagement feel very easy or rewarding. And perhaps that is okay—a game doesn’t necessarily need to be perfect to still be worth trying out. But by forgoing that kind of mechanical depth, Immortals Fenyx Rising doesn’t quite reach its full potential.