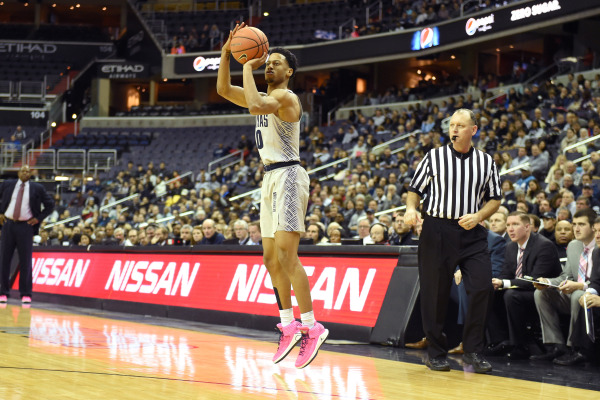 Before tipoff, it was announced that the Hoyas leading scorer, senior guard Jahvon Blair, would miss the game due to a coach’s decision, with graduate senior guard Donald Carey replacing him  in the starting lineup. After the game, Head Coach Patrick Ewing would not elaborate on his reasons, but did confirm he would be available for their upcoming game versus Xavier.

Blair’s absence was acutely felt early in the game, as the first three minutes of the game were characterized by sloppy play on both sides. The Hoyas would not score till nearly four minutes had passed, before back to back threes from Bile gave them a lead they would never relinquish.

The first half was played at a frenetic pace with both squads throwing the ball all over the court. The two teams combined for 19 first half turnovers as they struggled to get in rhythm. Georgetown tried several different lineup combinations throughout the first half. This included giving extended minutes to freshmen Jamari Sibley, TJ Berger, and Collin Holloway, as well as sophomore center Malcolm Wilson. The quartet combined for 23 first half minutes, after averaging only 10 minutes per game as a group in the season’s first 18 games.

According to Ewing, these substitutions were planned in advance, and Ewing was glad to give them a chance to get into a competitive Big East game.

“It’s something that I knew coming into the game,” Ewing said. “Those guys had their opportunity in practice. They showed their stuff and I went with it.”

Stars on both teams were quiet in the first half, as Pickett and sophomore center Qudus Wahab combined for just two first quarter points before sitting due to foul trouble, while Moore, the reigning Big East player of the week, tallied 7 points. It was Bile who led all players with 15 points, with 7 of those coming on free throw attempts as he helped deliver the Hoyas a 30-26 advantage at the break.

A flip switched for the Hoyas after halftime. After a quick Moore triple, the Hoyas went on an 18 point run, ballooning their lead to 19. In less than six minutes of game time, Pickett knocked down 3 consecutive three pointers as well as 3 free throws to punctuate the run. In the postgame press conference, Ewing said he told Pickett at the half to keep being smart and aggressive.

“In the second half, I just told him to keep his composure. Keep on going.” Ewing said.

DePaul then thundered back, scoring 10 straight led by 5 consecutive from graduate transfer guard Ray Salnave. Ewing called a timeout with the Hoyas leading by nine and 10 minutes left in the game. This would be the closest DePaul would get until the waning moments.

Bile, Carey and Harris all hit big shots before Wahab scored seven straight points of his own as the game wound down. Wahab was stifled throughout the game by DePaul’s swarming double team defense, but this decisive stretch put the game out of reach and showed how lethal Wahab can still be in the paint even when he has a rough game. .

While the Hoyas maintained a comfortable lead over the last four minutes of game time, three turnovers in the final minutes illustrated the team’s issues finishing games this year. Harris, who Ewing said postgame has been dealing with a nagging injury,  has particularly struggled in crunch time, including two turnovers in the last 3 minutes against DePaul.

These mistakes, coupled with DePaul knocking down 7 of their last 9 shots, made for a tighter final score than the game otherwise would have indicated. Moore scored 15 in the second half for the Blue Demons and consistently looked like the best player on the court throughout the game. However, he could not overcome Georgetown’s 7 offensive rebounds and 4 blocks in the second half, as the Hoyas’ length overwhelmed DePaul big men, sophomore Romeo Weems and senior Pauly Paulicap.

Postgame, Ewing placed particular praise on Bile’s effort. Despite only scoring 4 points in the second half, Bile chipped in 2 assists and 6 offensive rebounds against just one turnover while shooting 2-2  from the field. With Blair’s absence, Bile was able to take on the scoring load in the first half, but didn’t just hunt for his own shots in the second, demonstrating significant growth from earlier in the season.

“He did a very good job of moving the ball and taking shots when he had them,” Ewing said.

The Hoyas will return to action on Tuesday, March 2 for their first and only meeting with the Xavier Musketeers (12-5, 5-5 Big East). This is a must win for Xavier, who are clinging to hopes of a tournament bid, and cannot afford any more regular season Big East losses. They will have to do it without senior guard Nate Johnson, who was lost for the season due to a leg injury. Tipoff is scheduled for 7:00 p.m. and the game will be televised on Fox Sports 1. For continued coverage of men’s basketball and all Georgetown sports, follow @GUVoiceSports on Twitter. 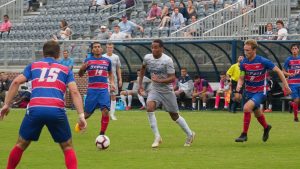 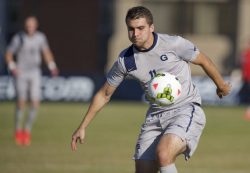