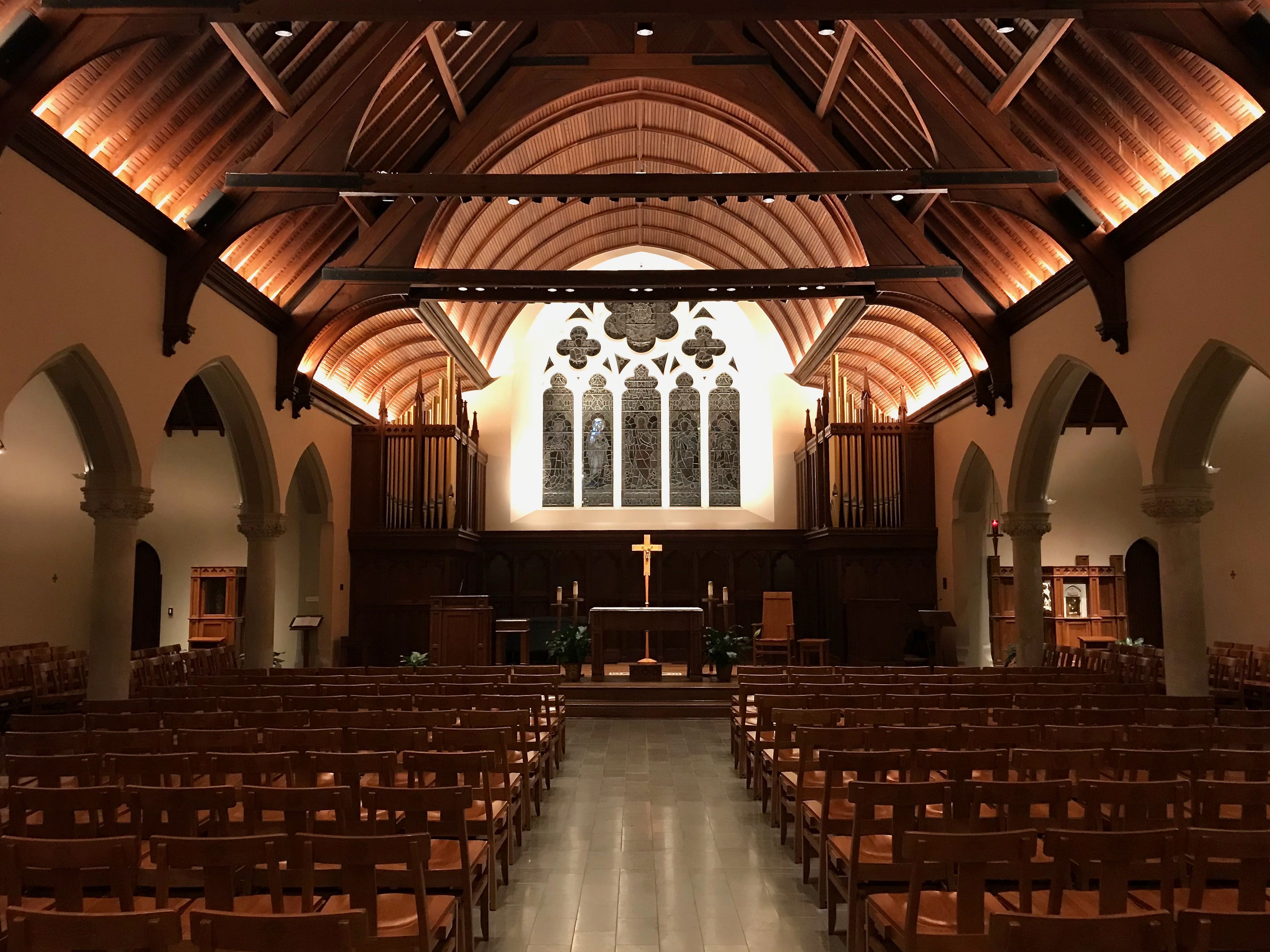 Even as most of the Georgetown community scattered across the globe last year with the onset of the pandemic, the university’s Jesuits remained on campus and adjusted to a new normal. The 47 Jesuits living on-campus in Wolfington Hall, as well as their brothers on 35th St and in the rectory at Holy Trinity Catholic Church, implemented public health guidelines that allowed them to continue living as a congregation and adapted their duties to virtual and distanced formats.

“We spread out the dining room tables more and use masks all the time in the house,” Fr. Drew Christiansen, S.J., said. “We felt kind of privileged because we were able to continue, except if we were quarantined, to dine with some other people.” Over the past year, Jesuits in Wolfington Hall were allowed to dine with three other community members at a table and kept logs of their interactions.

Religious services have a new look as well due to additional constraints. Georgetown’s Jesuits, and many others of their faith, have adapted the communion service to limit the possible spread of the virus. When taking communion, only the celebrant leading the service drinks wine—the blood of Christ—from the cup. During the Eucharist, other Jesuits each take the bread—the body of Christ—individually rather than someone passing it out. Seating in the chapel is distanced and now spills out into the foyer as well to accommodate all community members safely.

Jesuits in Wolfington Hall underwent two-week lockdowns twice after community members displayed COVID-19 symptoms and quarantined. Some older members of the community were hospitalized due to pre-existing conditions as a precautionary measure, though no one fell seriously ill as a result of the virus.

Br. Ken Homan, a doctoral student studying U.S. history, joined the Jesuit community at Georgetown on July 3, well into the pandemic. “The frustrating part is you get to a new place and you can’t meet anybody. Even just that interaction with professors is different,” he said of his virtual classes. After quarantining for the mandatory period, Homan moved into one of the satellite houses on 35th St.

Many of the Jesuits qualified for vaccination due to age or pre-existing conditions, and even younger members of the community have received at least one dose under D.C.’s guidelines for congregate living. The first Jesuits to receive vaccinations were those who work as chaplains in hospitals and nursing homes. “Even still, we’re taking a lot of precautions, in part to be good community members and good examples,” Homan said.

“You are dependent on everyone else to behave well and responsibly,” Christiansen added, saying that while full vaccination may allow some things to change within the house, they want to make sure that virus variants and transmission do not cause problems for staff and other people on campus.

Like the rest of the Georgetown faculty and student body, Jesuit professors and students have adapted to a virtual classroom as well. Fr. Armel Setubi, S.J., a doctoral candidate studying biochemistry and molecular biology, spent the fall semester solely on Zoom but has now resumed some lab work in-person.

Homan and Christiansen both emphasized the fatigue students face from taking classes virtually, and Christiansen has found new ways of keeping students in his seminars engaged. With a possible return to limited in-person class on the horizon, Christiansen said, “Maybe we all can learn to cut back a bit on outside commitments. Looking more carefully at the workloads of students might be one of the benefits that will come of this.”

Setubi and Homan found other lessons as well amid the confusion and struggle of life during the pandemic. “In a sense it forces you to live with yourself, but it also kind of forces you to live with your brothers,” Setubi said, reflecting on the changed dynamics in Wolfington. “It’s painful not to have guests coming in, it’s painful not to have friends or family coming in, but on the other hand, it helped strengthen our brotherly bonds and get closer.”

Homan also hopes COVID-19 health practices may carry over into a post-pandemic world, especially as the guidelines led to a massive decrease in flu cases in the past calendar year. “If you’re sick, it’s okay not to be in the midst of the community,” he said. “And I think that’s something the country needs to work on as a whole: we do not have good sick leave policies across the country.”

“I hope it’s the type of habit we can adopt that can really help and build a stronger society in the event of such a pandemic coming again,” Setubi added.

GU Mutual Aid Network redistributes over $5,000 to students in need