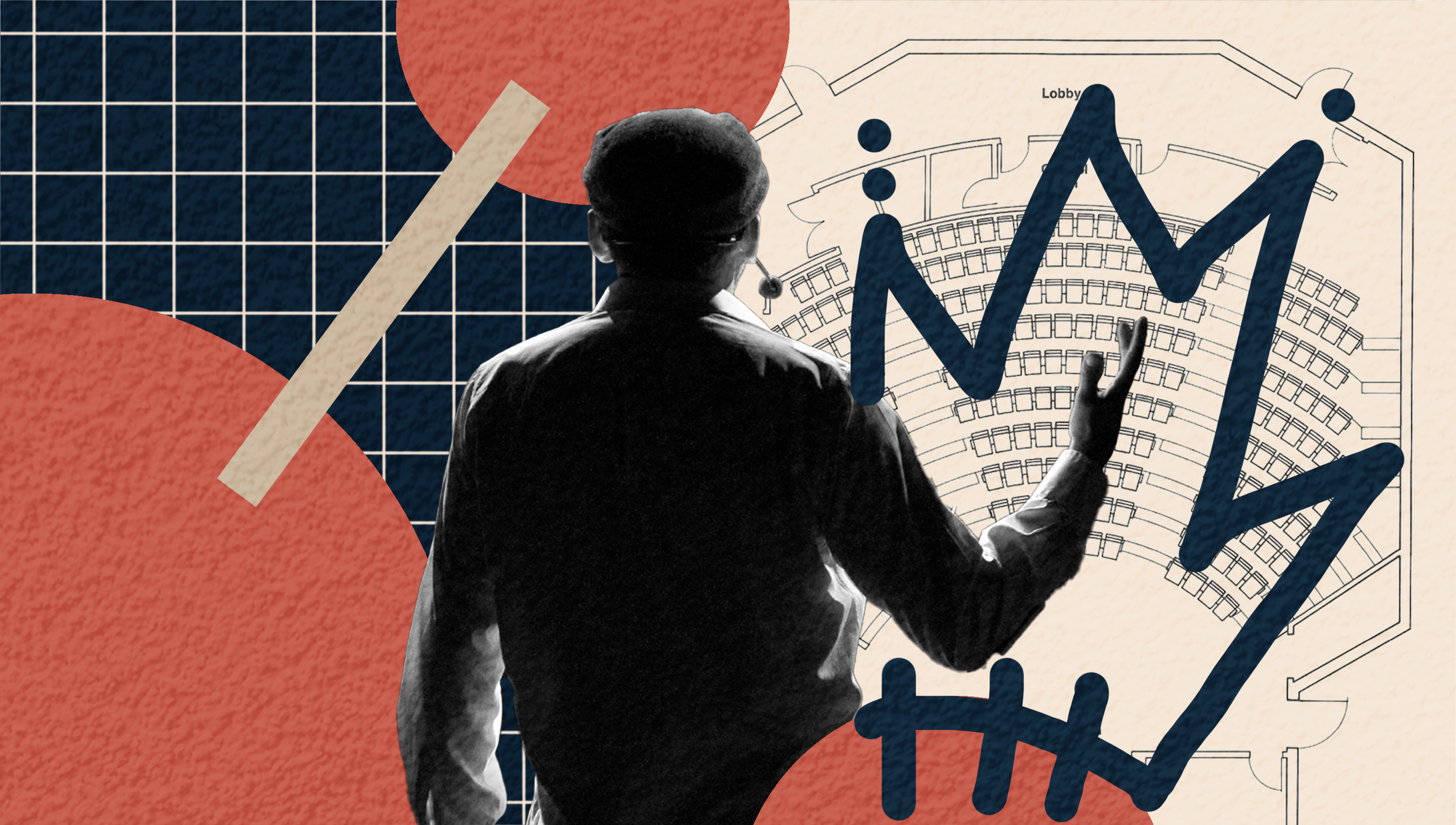 Rows of empty chairs line theaters around the country. What were once vibrant performance spaces are now barren; bustling audiences replaced by cold silence. Behind the curtain, props and set pieces sit tucked away in the corner, piled up and collecting dust. The space is just that: space.

“It’s just depressing to have a black box theater which is four black walls and a black floor and no nothing,” Adele Robey, Executive Director of Anacostia Playhouse, said in an interview with the Voice.

The COVID-19 pandemic has left theaters, from local black boxes to grand Broadway auditoriums, struggling to stay afloat. But as vaccination rates increase across the country and the CDC loosens restrictions for the inoculated, there seems to finally be a light at the end of the tunnel. The Kennedy Center recently announced a full reopening to begin on Sept. 14, with many Broadway productions returning to full capacity around the same time.

Still, artists did not take the pandemic as a death sentence. Though the online landscape proved intimidating, efforts turned to delivering virtual theater to audiences in their homes. Arena Stage adjusted its focus to home-produced works, developing a series of three musical projects entitled Arena Riffs. Shakespeare Theatre Company commissioned actor Patrick Page for a filmed one-man show entitled All the Devils Are Here: How Shakespeare Invented the Villain. And Signature Theatre produced a full online season, mounting five productions filmed in their theater and delivered online.

According to Matthew Gardiner, Associate Artistic Director of Signature Theatre, the question was simple: “What can we achieve in this time when we can’t bring huge crews of people together to build sets every day and build costumes?”

Many theater-makers found that the new medium allowed for more innovation. “The fact that we were able to be open with the artists and just say, ‘What format interests you? What topics interest you?’ It really felt like we got artistic creation that was fresh and new because we were open to it and I think that’s a success,” Teresa Sapien, Line Producer and casting director at Arena Stage, said.

The happiest surprise for many local theaters was the sheer reach of virtual projects. To accompany the release of Romeo and Juliet (2021), directed by Shakespeare Theatre Company’s Artistic Director Simon Godwin, the theater put on an episode of their weekly webinar Shakespeare Hour LIVE! with Claire Danes—a stream that garnered 13,000 views. “That felt really exhilarating and thrilling just to be able to reach that many people that we would never normally do in just our theater,” Godwin said.

In this sense, the virtual theater transition has almost been a positive, allowing for projects with far more geographical access for far cheaper. This has certainly been the case for the Lab for Global Performance and Politics at Georgetown University, whose project Here I Am, a one-woman show by Mélisande Short-Colomb, has garnered unprecedented attention.

Short-Colomb is a descendant of the GU 272, the 272 enslaved people sold by Georgetown University in 1838 to pay off the school’s debts. The show, in part autobiographical and in part historical, is an exploration of institutional accountability as well as family history. Its compelling story brought many around D.C., and around the country, to the Lab’s work for the first time.

“It’s been a really important and exciting time of growth and expansion and more people are aware of the Lab’s work and just able to follow and engage,” Professor Derek Goldman, co-founder and co-director of The Lab, said. The Laboratory for Global Performance and Politics is a cross-disciplinary program that uses performance to explore important civic issues. “We were already doing some virtual work and had a national and global network with our projects so that isn’t new, but I think sort of the currency of the virtual has allowed many more people to tap into the work.”

For The Lab and for plenty of local theaters, having to transition to online work has been a lesson about accessibility. “What we’ve found is that film, being able to bring theater on film into somebody’s living room, just is another way to make what we do more accessible and feel less elitist and feel less like, behind closed gates,” Gardiner said.

But accessibility is about more than just broadening audiences. Theater as an institution is restrictive, because of limited capacity in the physical space, but also because of high ticket prices. This time away from the space has sparked dialogue amongst theater-makers on how to improve on both physical and economic accessibility.

“The biggest conversation that is happening with theater-makers right now is not necessarily about film, but like, accessibility,” Gardiner said. “Whether that is the price of the ticket or the ways in which to open your doors to a larger tent, to make it clear that you’re trying to build as inclusive a community as possible.”

Ticket prices are a huge barrier to access. While largely an inevitable side effect of the amount of money it takes to mount a production, the low cost of virtual theater has meant lowered prices for a seat in the ‘audience.’ Arena Stage’s online season has been mainly free, allowing access without the financial burden that typically keeps many out of physical performances.

However, while certain endeavors have allowed for increased accessibility online, the pandemic has ravaged smaller venues, many of whom are relying almost exclusively on grant money to keep from permanently shuttering. Anacostia Playhouse is located in D.C.’s Ward 8, a community for whom transitioning online doesn’t mean an increased rush to the theater.

“Ward 8 is so dramatically underserved. You know, kids who couldn’t get online to go to school, so they’re not getting online to go to theater, you know, it’s like so far down on the list,” Robey said. More than a quarter of families in Ward 8 live below the poverty line, and the area is a ‘food desert’, meaning there is a lack of grocery stores or healthy food options. “Anybody who spends 5 minutes over here says ‘Oh my god this is such a wonderful place but God! You don’t even have a drug store!’”

For communities with less internet access, virtual theater doesn’t solve the problem of accessibility. “We may even have more luck in getting people to walk down the street than go online when we do free performances,” Robey continued. The issue even translates into marketing, which cannot be done fully online, according to her. “We also print stuff because we have to for our community, everything just can’t be online because you’re going to lose so many people.”

Anacostia Playhouse has always focused on serving the community in Ward 8, and despite the challenges, it has continued to fill holes with its online programming. In addition to numerous musical concerts and play readings, the Playhouse has put on a series of virtual performances with local magicians. “[It’s] for our families, cause there’s so little family stuff here in Ward 8,” Robey said.

Reopening the venue is incredibly important for the Playhouse, but even this is bound to pose its own set of challenges. For smaller theaters, health regulations set by the CDC, by local and state governments, and by the Actors Equity pose logistical and financial challenges.

“The Mayor likes to say, you know, we’re open with 25 percent capacity. Well 25 percent capacity for us is 25 people, but if you throw in however many people are onstage you can have maybe 15 people in the audience,” Robey said. “You know, productions cost a lot of money. And we don’t even know if 15 people will come yet.”

All theaters are faced with their audience’s apprehension about returning to the theater. “People are nervous, people are scared—it’s been a really traumatic year on multiple levels for everyone,” Sapien said.

To tackle the issue, D.C.’s theaters are brainstorming strategies to restart normal operations. Arena Stage is considering outdoor programming for the fall to ease audiences back into a return, alleviating fear of COVID-19’s capacity to spread indoors. “It’s going to take a bit of time for people to get back into the habit of going to the theater,” Godwin said.

While making reopening plans, theaters must balance the cost of productions with potential revenue garnered from ticket sales. With lowered capacity and increased apprehension from patrons, reopening is a daunting task.

“We stayed alive through a lot of emergency grants and things that have come through because various foundations want you to stay alive and be here in the future. But the minute we open and we don’t have an audience coming in, that buildup of grant money that we have is going to go like snap, snap, snap—gone—to pay to mount a production,” Robey said.

Larger theaters have expressed the same financial apprehension. “Signature in no way can accommodate any kind of distancing,” Gardiner explained. “Like it just won’t work, what we do will not. Signature is a 300-seat space that does huge musicals. You can’t do that unless all 300 seats are filled.”

Still, creatives are eager to return to live performance as soon as possible, citing the economic and cultural importance of theaters as something valuable missing during this time. “Theaters have always been a very essential part of the economic success of downtown locations, be it in America or in Europe or around the world,” Godwin said. “So what theater needs to do now is be part of a bigger renaissance of cities and there’s been a great kind of flight from the urban centers and we need to make it kind of possible and attractive to return.”

It is undeniable that the pandemic has had an impact on the theater industry, and moving forward, artists are hoping for change. Calls for accessibility and equity have been brought to the forefront thanks to the virtual landscape. On April 22, in the wake of the sexual harassment scandal with Broadway producer Scott Rudin, hundreds of artists took to the streets of New York for a March on Broadway to demand a more inclusive industry.

“The edifice cannot be built on something as rotten as it was built on before in so many ways. And so if the whole edifice has to be put back together, we’re not going to use the same rotten wood and rotten tools to hold it up—we need to make new ones,” Goldman said.

The pandemic has challenged and pushed local theaters, and at the end of the day, the theater that’s returning might not be the theater that closed down in March. “I think we’re going to see new kinds of work that aren’t just technology as a backdrop or just film’s over here, theater’s over here,” Goldman said. “My hunch is that over the next couple of years there’s this kind of third frontier waiting for us.”

Orly Salik
Orly is a sophomore in the college and an assistant editor for Leisure. She exclusively wears heels so that people don't realize how short she is. 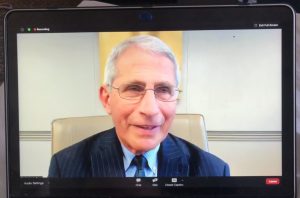