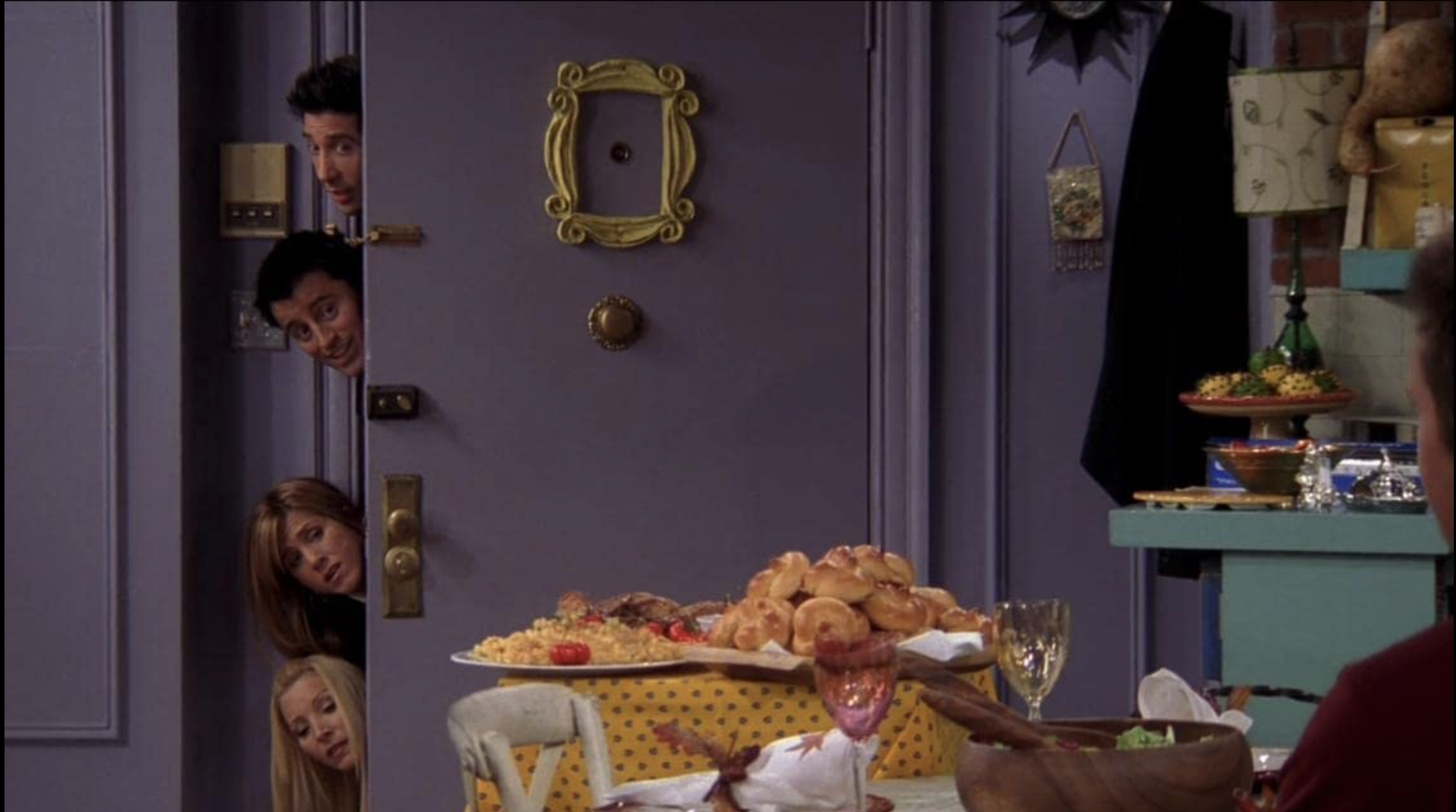 The holiday season brings a plethora of festive movies and TV shows, but it typically skips over Thanksgiving, a holiday that is often overlooked in the transition between Halloween and Christmas. Nonetheless, Friends makes up for this turkey-themed void with a seasonal Thanksgiving episode. The series showcases the beauty in the chaos that is Thanksgiving, a holiday that inevitably brings people with different tastes and views together. In the spirit of a week full of food and binge-watching TV, I will rank each of the Friends Thanksgiving episodes. Sit back, grab a slice of pumpkin pie, and enjoy!

While a fundamental installment in the progression of the relationship between Ross (David Schwimmer) and Rachel (Jennifer Aniston)—a central subplot throughout the series—the episode doesn’t take place on Thanksgiving nor does it address the holiday beyond a brief mention of cocktail plans for Turkey Day. Thus, Season 2’s episode takes the tenth place spot for its lack of Thanksgiving content despite being an important episode in the sitcom.

“The One With Chandler in a Box”

The Thanksgiving theme of this episode is slightly distracted by the fact that Chandler (Matthew Perry) spends the majority of the episode inside a box—a punishment he receives after kissing Joey’s (Matt LeBlanc) girlfriend. While this sort of shenanigan is typical of the dynamic between Chandler and Joey, the box in the middle of the room still feels a bit odd. It adds comedy throughout the episode when the other characters forget about Chandler’s time-out spot until he engages in the conversation with a witty remark from inside the box. Despite its randomness, the episode results in a display of Chandler and Joey’s lasting friendship and commitment to each other. While the box is a bit out of the ordinary, the episode shows the true friendship of Thanksgiving.

“The One Where Ross Got High”

Season 6’s episode features everyone’s favorite parents: Jack (Elliott Gould) and Judy Geller (Christina Pickles). Given that the couple are Ross and Monica’s (Courtney Cox) parents, it was inevitable that they would make an appearance at the Thanksgiving table. Throughout the show, the six friends tiptoe around each other in order to avoid the mention of secrets they’ve been keeping from Mr. and Mrs. Geller. The dinner becomes even more complicated since the Geller parents have never liked Chandler ever since Ross blamed the smell of marijuana coming from his room on his then-roommate. This comes as a surprise to Chandler and gives rise to an even trickier situation now that he is living with their daughter. At the end of the day, Jack and Judy are on team Chandler and disappointed in their two children for the secrets that have been exposed.

In addition to the information being hidden from the parents, Rachel attempts to show her skills in the kitchen by making a traditional English trifle for the crowd. However, her dessert is ruined given that she accidentally combines the trifle and shepherd’s pie recipes. This is not the sweet-savory combo you want to taste during your Thanksgiving feast. But, hey, at least Joey enjoys it!

The primary plot of this episode is Phoebe (Lisa Kudrow) hiding a friend’s dog in Monica and Chandler’s apartment. There’s nothing like a dog that eases inevitable holiday tension, except when the host is “allergic” or, really, irrationally afraid. Chandler eventually lets go of his fear of dogs after he sees how much Monica likes it; however, this sympathy is short-lived after he finds out Monica is in on the back-and-forth of hiding the dog.

This episode also introduces the young and charming Tag (Eddie Cahill), Rachel’s new assistant who will later become her boyfriend. What’s Thanksgiving without blurring the line between work and personal life?

Most interestingly, in my opinion, the crew decides to play “Chandler’s dumb states game.” As someone who loves maps, this sounds like my kind of Thanksgiving. Joey boasts 56 states (“if New England’s not a state, then why does it have a sports team?”), while Ross takes the game seriously, betting that he can name all fifty states before dinner. He ends up eating his turkey after everyone’s gone to bed since he loses the game after repeating one state twice. In addition to the banter that this game brings throughout the episode, it sounds like a fun activity that I just might incorporate into my own Thanksgiving day celebrations this year.

“The One With Rachel’s Other Sister”

Season 9 brings an iconic guest to Thanksgiving with Christina Applegate playing Amy Green, Rachel’s spoiled and ditzy younger sister. Amy’s lack of self-awareness is comical but also a bit draining throughout the progression of the episode. Notably, Amy fails to call her niece by the right name nor recognize other characters with whom she grew up who have aged nearly twenty years. Amy’s interactions with Phoebe are particularly out-of-touch as her spacey, blunt comments don’t quite mix with Phoebe’s distinctive sarcasm and sense of humor.

This is also Emma’s, Ross and Rachel’s baby’s, first Thanksgiving. Amy believes that if something were to happen to both Emma’s parents, she would get custody of the baby, whom she does not appear to have a strong connection with nor ability to raise given that she continually mistakes her name for Emily. Amy’s difficulties lead to the revelation that Monica and Chandler would become Emma’s guardians if something were to happen to Ross and Rachel. This inspires the gang to spiral down a rabbithole of “what ifs” regarding the theoretical guardianship of the baby. While slightly depressing, important conversations such as this one often surface around the Thanksgiving dinner table, making this episode witty as well as realistic.

“The One With the Rumor”

In probably one of the most iconic cameos in the span of the sitcom, Brad Pitt joins Thanksgiving dinner as Will, an old high school classmate who detested Rachel for making fun of his weight in the past. Pitt, who was married to Jennifer Anniston at the time of the 2001 episode, makes an appearance as a new-and-improved Will who all three of the women are drooling over. Throughout the course of dinner, the truth behind high school rumors and the “I Hate Rachel Green Club” surfaces. Rachel feels betrayed by Ross, with whom she is expecting a child. The twists of the characters’ histories coupled with the irony of the real-life marriage between the actors makes this an impressive and noteworthy episode in the entirety of the series.

“The One With All the Thanksgivings”

If there’s one thing that Thanksgiving is bound to bring, it’s stories of the past whether wanted or not. Season 5’s Thanksgiving episode is reminiscent of the friends’ worst Thanksgivings past, much to the joy of Chandler, who notoriously hates Thanksgiving after learning of his parents’ split as a kid over turkey. The episode is full of dramatic irony, with each bad memory being exposed by the previous. The stories start with Joey getting his head stuck in Monica’s turkey, which leads to the iconic image of Monica dancing with a Turkey on her head later in the episode. Rachel later recounts her first encounter with Chandler at the Geller household years ago, where Chandler calls Monica fat, something that left a lasting impression. The following Thanksgiving, Monica, with her revenge body, accidentally drops a knife and cuts off Chandler’s toe.

Similar to the occasional flashback episodes throughout the series, this episode provides an interesting look into the group’s past interactions with one another. These flashbacks provide context to the important histories shaping the dynamics between the characters, namely that between Monica and Chandler who have just recently started dating at this point in the sitcom.

“The One With the Late Thanksgiving”

In the final season of Friends, Monica reveals that she is tired of hosting Thanksgiving and doesn’t plan to do so this year. Her friends convince her that she should work to make an even better Thanksgiving than last year, and there’s nothing Monica loves more than a challenge! Monica prepares a scrumptious looking Thanksgiving feast, including cranberry sauce à la Chandler. “Chanberry” sauce, if you will.

Meanwhile, Ross and Joey attend a Rangers game that makes them late for dinner, and Phoebe and Rachel enter Emma into a baby beauty pageant which they attempt to hide from Ross. All secrets are revealed when they are locked in the hallway by their angry hostess. The door eventually opens only in a last ditch effort to free Joey’s head when it is stuck between the wall and the door with the chain lock on. As he catapults through the door, he knocks over the entire Thanksgiving display, but Monica surprisingly doesn’t care as she has just learned that she and Chandler have been chosen to become adoptive parents.

The tensions are high throughout the episode, but when the characters come together and recognize what is truly important on the holiday, the episode becomes a true display of family and friendship. This culminating Thanksgiving feature serves as a reminder to be grateful and appreciative for what you care about despite the chaos that often accompanies the holiday season.

“The One With the Football”

What’s Thanksgiving without food, football, and family fights? This season’s Thanksgiving celebration resurfaces Ross and Monica’s childhood rivalry in the “Geller Cup”—an annual family football game that the siblings have not competed in since their mother banned them from playing football after the competition got out of hand. The gang gears up in their 90s sweats to play 3-on-3, resulting in team swaps, an argument over a Dutch spectator at the park, and the continued competition between Ross and Monica. The tension is high during the game, but it ends in a much-deserved friendly dinner. The fall leaves and 90s styles of the characters reminds me of what I imagine to be Thanksgiving in New York City. At this point in the series, the six friends have melded into the comfort of their characters, making their interactions throughout this episode truly representative of the series as a whole. The episode ends with snow falling, which is always the perfect segway between Thanksgiving and the December holidays.

“The One Where Underdog Gets Away”

This episode is messy, but what Thanksgiving celebration isn’t? The group comes together for their first Thanksgiving after their individual plans go awry, starting the annual tradition of celebrating together in the seasons to come.

The convergence of six different Thanksgiving traditions brings many cooks into the kitchen, both literally and figuratively. Monica does her best to please everyone and make them feel at home. However, when a giant balloon from the Thanksgiving Day Parade is floating around the city, they get locked out of the apartment and all the food is ruined. Despite this wrinkle in Monica’s well-ironed plan, the episode ends with the friends enjoying a Thanksgiving dinner of grilled cheese sandwiches. There’s really nothing that a good grilled cheese can’t fix.

The 1995 hairstyles and outfits give the vibe of that one family member’s house that simultaneously never changes yet which always has something new to discover—think, your great aunt’s basement. There’s a sense of nostalgia associated with this feeling and this episode, giving it a true Thanksgiving feel. 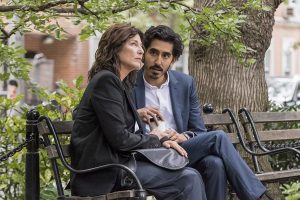 The Mindy Project Highlights Realities of the Modern Sitcom