The White House’s star-studded “It’s On Us” campaign may have made headlines this month, but it’s far from being the only step in recent times to combat sexual assault on college campuses. As Georgetown was sending detailed emails explaining its existing process for addressing sexual misconduct, other universities were drastically changing theirs to comply with—and even surpass—new standards. Georgetown, on the other hand, had already implemented similar changes earlier this year. In fact, the Hilltop’s handling of sexual assault issues, at least institutionally, fares pretty well when stacked up against other schools of comparable caliber and spiritual nature.

Under the Obama administration’s White House Task Force to Protect Students from Sexual Assault, the U.S. Department of Education’s Office for Civil Rights issued a report on May 1 naming 55 colleges and universities nationwide under investigation for possible Title IX violations concerning the mishandling of “sexual violence and harassment complaints”—a list that has grown to include over 70 schools as of September.

Not all schools, however, are ahead of the game. Harvard University, Dartmouth College, and Princeton University don’t just share Ivy League status—all three schools are on the OCR’s investigation list. Therefore, it was long overdue when Princeton finally became the last Ivy League school to lower its burden of proof for sexual assault cases earlier this month. The university’s evidence standard for such cases changed from “clear and persuasive” to “preponderance,” or rather, “more likely than not.” Columbia University student Emma Sulkowicz found herself in the national spotlight when she began carrying her mattress around campus as a physical reminder of the burdens that victims of sexual assault face every day.

In February, Fordham University earned one ranking colleges don’t ever want—the Jesuit university with the highest number of on-campus sexual assault claims between 2010 and 2012. According to data from a report by the Office of Postsecondary Education, Fordham, with an undergraduate population of 8,325, led the nation’s 28 Jesuit universities with 23 claims, followed by Gonzaga University (4,896 students) with 21 claims, Marquette University (8,300 students) with 20 claims, Boston College (9,100 students) with 18, and Georgetown (8,258 students) rounding out the top five with 15 claims.

The number of claims, however, isn’t the only sign of trouble—Regis University is the only Jesuit university on the OCR’s investigation list. Yet, its definition of consent is one of the most comprehensive: “Consent is defined as freely and actively given, mutually understandable words or actions which indicate a willingness to participate in a mutually agreed upon, specific sexual act.” Clearly, this indicates meaningful change cannot simply be made at the systemic level.

The White House Council on Women and Girls revealed that roughly one in five college women is sexually assaulted by the time she graduates, but only 12 percent of them report the incidents—an alarming number when stacked against the estimated 40 percent of assaults reported by the overall U.S. population. Even more concerning is that students found guilty are expelled only in a minority of cases, with the more frequent consequence being suspension or social probation—meaning they are granted continued presence on campus with their victims.

Sexual assault is a pressing, complex problem within the university environment. The Obama administration has taken numerous steps to punish perpetrators properly and help combat the issue, but it has one more option in its arsenal: the “nuclear option.”

Its alternative term, “the academic death penalty,” is also fitting, as Title IX violations are grounds for losing eligibility for federal funding. This would mean cutting off access to federal student grants and loans, as well as research funding—producing negative consequences for students’ education so dire that this method of punishment has never been, and realistically will never be, used.

Since the Obama administration can’t exactly rule with an iron fist to make systemic improvements, its next best option is a massive public relations campaign to change campus culture surrounding consent. Georgetown’s involvement in the White House’s “It’s On Us” campaign shows a small—but significant—step in the latter’s direction. Because after all, a tarnished reputation can do more damage to a university than any dollar amount. 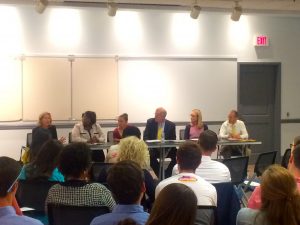