Last weekend, aspiring dancers flocked to New York City to audition for the 12th season of the reality competition So You Think You Can Dance. After over a decade of nearly the same finalist format, the show’s producers decided to add a new twist: this season’s finalists will be placed into two teams, ten “street” dancers versus ten “stage” dancers. Executive Producer Nigel Lythgoe argues the new format will be “much more exciting for viewers” — I argue it will perpetuate the racial and socioeconomic divides both on the series and in the broader dance world.

It’s no secret that SYTYCD has a diversity problem. In terms of dance styles, the show unapologetically favors contemporary/jazz dancers — in every season, over half of the finalists specialize in the genre, and five of the series’ champions are female contemporary dancers (full disclosure: I adore all five of those winners, but the point still stands). In most seasons, only four out of the 20 finalists name a branch of hip-hop dancing as their specialty. Therefore, it’s unsurprising that the producers want to mix things up a bit by ensuring more diversity of genre within the competition. Their solution, however, leads to a different issue of diversity.

Throughout its eleven seasons, the show has featured an average of only five black dancers in each group of Top 20 finalists, reaching a series high in Season 10 with seven black performers making it to the live show round. Yet, last year’s season (the 11th) only featured two male black dancers, and zero female black dancers, in its Top 20 finalists. Black dancers featured on the show have specialized in various styles, however, of the four black dancers that have won the title of America’s favorite dancer, three are men specializing in a form of hip-hop. If the new format’s goal, however, is to increase the number of black dancers on the show, then producers have overlooked the fact that nearly all of the black female finalists, save for a few hip-hop dancers, have been technically trained contemporary/jazz dancers.

With the new format, the “street” dancers will be the ones skilled in hip-hop, animation, or breaking, while the “stage” dancers will be  those trained in styles such as contemporary, ballet, jazz, or tap. Here’s the problem: constructing the show like this essentially turns it into a class battle reminiscent of the plot of Save the Last Dance (in which a wealthy, white ballet dancer challenges herself to break out of her comfort zone to learn the urban, ethnic style of hip-hop). The stage vs. street dichotomy pits dancers who can afford proper training and expensive fees for competitions and conventions — where they can gain exposure to renowned choreographers in the business, and whose tuition alone can cost as much $500 a weekend — against dancers who have supposedly trained in the “streets” for free.

Such battles have happened organically on the show — season four hip-hop dancers Joshua Allen and Stephen “tWitch” Boss surpassed two female contemporary dancers to be the last contestants standing, season six untrained krumper Russell Ferguson usurped the technically-trained contemporary dancer Jakob Karr for the title, and season ten’s gendered co-champion structure allowed contemporary dancer Amy Yakima and hip-hop dancer Du Shaunt “Fik-Shun” Stegall to both be crowned as winners. And yet, forcing such competition until two of each type of dancer remains is actually condescending to the street dancers. While it may help ensure street dancers can remain in the competition longer than they normally would — or even advance to the finalist round to begin with — if the producers are not careful, the new structure could come across as affirmative action for an “underprivileged” group of dancers. This would be insulting to past “untrained” dancers, regardless of race, who have forged ahead of the contemporary-trained fan favorites to find success on the show.

Particularly for those in the “stage” group of dancers, dance is a space of privilege. Take the ethnic makeup of the Georgetown University Dance Company, or any elite university’s, which requires a high level of formal technical training in order to audition — just a few of its dancers are black. Granted, such companies can only be as diverse as the larger student body and have strict acceptance standards by necessity due to limited resources, but the example shows that television producers aren’t the only reason for a lack of diversity in highly-trained dance. In contrast, roughly half of the members of Groove Theory, Georgetown’s hip-hop team that requires no formal dance training in order to audition, are black or hispanic. While some team members have never formally trained, others, including myself, have studied styles ranging from contemporary to hip-hop (because yes, you can train in hip-hop somewhere other than the “street”).

Perhaps SYTYCD’s newest gimmick bothers me because I now identify as both a contemporary and a hip-hop dancer. Maybe it irritates me because it’s a contrived last-ditch effort to save a show that, like many others, ends up decreasing in quality with every so-called upgrade. More likely than not, it’s because the “stage vs. street” labels set off every red flag of political incorrectness. 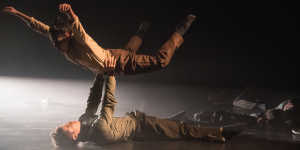 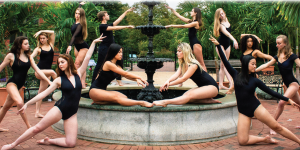