Bridging the Distance of Friendship

The day they left for college, two of my friends and I met at a Chick-fil-A next to the highway. During high school, the suburban chain had served as a base, an easy place to meet up and eat an inexpensive meal. As we sat and ate our chicken nuggets, recounting memories of the last few years, an ominous cloud hung over us. To the average customer, we were the standard group, three teenagers inhaling waffle fries. But inside our conversation, things were not so normal. Soon they would start their next adventure as freshmen at Florida State, but it would no longer be with me. Sitting across from them, I asked myself what would happen to our relationship. How could I replicate this friendship with anyone else?

When I arrived at Georgetown a few weeks later, I realized that it would take me much longer than I’d thought to find people who could fill the role of my friends at home. In excited preparation for my first year, I had confidently purchased tickets for the Landmark Music Festival, something that seemed the most quintessentially D.C. thing I could do. I had told myself that there was no way that, by the end of September, I would not have friends to attend the festival with me.

When that weekend came, I found myself walking to the festival alone. I told myself that despite being by myself, it might still be fun, that I could enjoy some of my favorite artists even without people to sing the songs with me. About halfway through Wale’s first set, I began to doubt that idea. While watching people laugh and dance with their friends, I imagined myself, currently nodding slowly along with the beat, dancing and yelling lyrics with my friends at home. The friends that loved music, that loved having a good time, and most importantly, loved me.

At one point during the set, a man approached me and tried to relieve me from my misery. He pointed at his wristband and said, “Hey, I’ll sell you my wristband for tomorrow for five dollars. Maybe you can bring a friend.” Internally, I wondered if it was that obvious: if I looked as empty on the outside and I felt on the inside. I laughed and lied that friends were on the way, that I had arrived early to listen to my favorite artist.

Over the first few months, I found that at Georgetown, there were many people who shared my interests. We read the same publications, followed the same sports, and enjoyed the same music. I had found people like me. At Georgetown, people liked to discuss politics, laugh at Pixelated Boat tweets, and debate the top ten basketball players of all time, something I had never experienced with my friends back home.

But something was always missing. No matter how similar our interests were, there was never the same connection to those at home. Maybe I hadn’t given it enough time, or maybe my personality was too different from the typical Georgetown student. When I returned home for Thanksgiving that first November, I had never been more thankful. My friends had waited outside my home, ready to offer hugs and recount stories of their first semester in college. No matter how long we had been apart, we acted as if it was only a few days rather than a few months.

One friend in particular, Roshan, set an unusually high bar. For the first few articles I wrote for the Voice, he texted me and discussed some of the points that I had brought up. Later, when we together at home in Florida, he referenced a joke I had made on one of the podcasts we had recently recorded. He had listened to each podcast that I had participated in, something that not even my mother had done.

It is difficult to find people who are similar to the boys back home. We share some of the most important life memories – proms, the college admission process, high school graduation – that no one else will be able to replicate. Even the most basic memories, such as the first drive around town with no real destination in mind, become emblematic of the coming-of-age process. Maybe I limited my opportunities to find people at Georgetown because of the comparison to my high school friends, always expecting people to have the same sense of humor or opinions. Maybe I should have spent less time texting my friends and making plans for the second we were all back home. But in that first semester, they were an important part of my college experience, even 900 miles away.

Eventually, I began to find my place. As with many things, time manages to smooth over much of the initial anxiety. I found people to do simple things with. Leo’s went from a solemn meal in the corner with headphones to an exciting conversation with others. Friday nights changed from FIFA alone to hanging out and spending time with a group of friends. Friends at college were different, but I began to enjoy the small moments again.

Things at home eventually changed, too. Texts and stories stop being shared as frequently. At the same time, I began to feel more at home at Georgetown and became better friends with the people I had met. When I see my friends at home now, I see that they have changed too.

Still, I look forward to seeing them the next time we meet at Chick-fil-A. We might discuss different things now, but they are still the same people. We’ll exchange our stories and I will know that the friends I am meant to have will adapt and change with me, and will stay by my side no matter what. 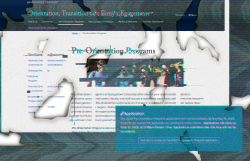