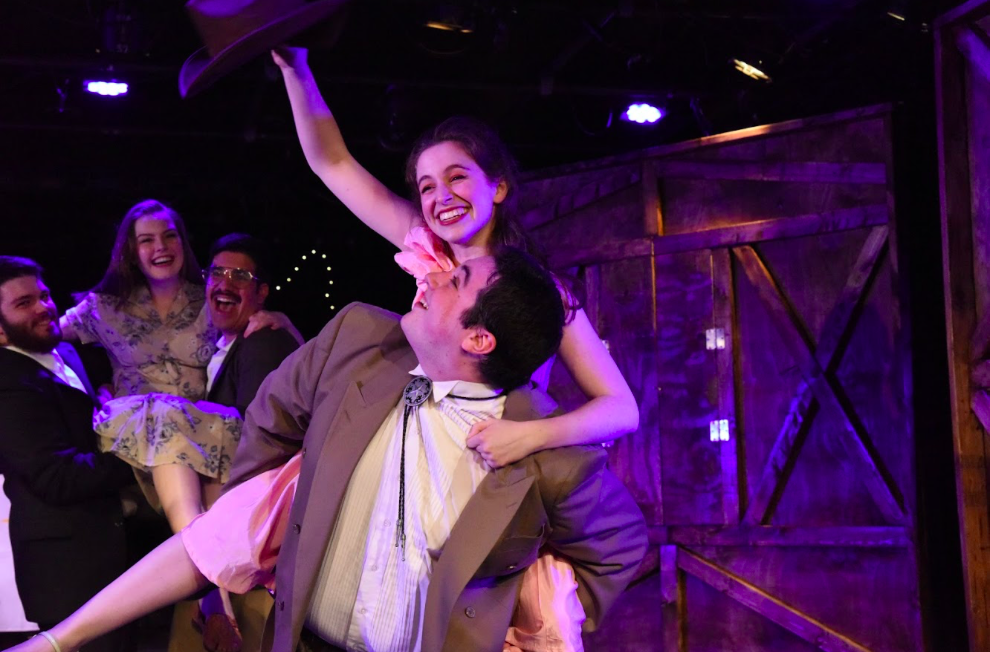 It’s pretty safe to say that there are few who are unfamiliar with the general storyline of Footloose. Whether it’s the original film with a young Kevin Bacon or the adapted musical, Footloose holds an iconic position in our collective memories of the ‘80s, right alongside brightly-colored scrunchies and rigid mom jeans.

As Mask and Bauble gears up for its last few shows of Footloose, directed by Annie Ludtke (MSB’18) and produced by Benjamin Sullivan (COL’19), it’s reasonable to be wary of the choice of this particular musical. After all, what more could be interpreted from this familiar script? Mask and Bauble does not necessarily try to reimagine this classic work; instead it seems to focus on the underlying and central message of the plotline, doing away with excessively flashy elements and touches. The result is an honest and enjoyable performance by an obviously passionate cast and crew.

For those who need a refresher, Footloose tells the story of Ren McCormack (Colum Goebelbecker, COL ’21), a teen who moves from Chicago to the small midwestern town of Bomont. Ren finds the town to be overly conservative and chafes against the many rules set by Reverend Shaw Moore (Max Hartley, MSB ‘18). Initially labeled a troublemaker, Ren eventually convinces his classmates, and later the town leaders, to relax some of the rules, all while falling for Ariel Moore (Cristin Crowley, MSB ’20), the Reverend’s daughter.

While the production is entertaining from the start, the show gains momentum as it nears the middle of Act I. The larger musical numbers with the entire company, specifically “Holding out for a Hero” and “Let’s Hear it for the Boy,” are extremely fun and energetic. Even the most skeptical audience member can’t help but smile at the enthusiasm and eagerness into which the actors launch themselves through song and dance. One of the most entertainingly choreographed numbers is “Mama Says,” in which Willard (Gabriel Berkowitz, MSB’20), Jeter (Adam Potter, SFS’20), and Bickle (Ben Ulrich, SFS ‘20) perform a difficult and very lively sequence that is equal parts impressive and humorous.

Mask and Bauble’s interpretation of Footloose is by no means novel. That being said, it is able to effectively focus on the true message of the musical: the importance of the freedom of expression, especially through dance. For such an upbeat musical, it is also surprisingly adept at portraying the darker internal struggle of Reverend Moore and those around him who are affected by the tragic death of his son years earlier. Through the solos of Reverend Moore, his wife, and Ren’s mother, the audience is able to observe the nuanced conflict that many of the townspeople are undergoing.

Despite the show’s somewhat lack of originality, there is clear ambition in Mask and Bauble’s technical aspects. The dances are well-choreographed and elaborated to their fullest extent. The set changes are professionally swift and effective for the smaller scale of the stage. In addition, all of the music is supplied by a live band composed and conducted by eight Georgetown students. This band has the advantage of being fully visible and not hidden behind a curtain, providing an all-encompassing experience for the audience.

Mask and Bauble’s Footloose demonstrates that a production can be enjoyable based on the main message of its script and the enthusiasm and energy of its cast. There is nothing particularly innovative or pretentious about this production, but that’s okay because at the end of the day, the audience should be—and is—mainly concerned with cutting loose and kicking of its Sunday shoes.

Why Hoyas Should Care About Women in Iran