It was never really “cool” to like Twenty One Pilots. Consisting of singer Tyler Joseph and drummer Josh Dun, Twenty One Pilots has always been associated with wannabe edgy, cringe-worthy teens in ‘Skeleton Clique’ t-shirts that are still stuck swimming in a sea of their own hormones. However, with their newest album Trench (2018), Twenty One Pilots seeks to redefine themselves as a band that can impress not just fans and cynical music critics, but reaches out to a general audience.

Trench is the band’s first studio album in three years and is the duo’s fifth full-length project, spanning 14 tracks. It tells the story of a character named Clancy, who must escape the city of Dema. He joins a group of bandito rebels that aim to free people from the city’s rulers. It is a classic underdog narrative with a revolutionary tone. However, you don’t need to know every detail of the album’s lore to enjoy it. The project is thematically rich, musically and lyrically interesting, and most of all – catchy. There is no song on the track list that you won’t find yourself humming along to. Josh Dun’s solid drum beat and an undeniable pop feel allow “Nico and the Niners,” one of the album’s three singles, and “Cut My Lip” to stick in your head. It is an undeniably addictive album, with incredible production, that allows you to project your own meaning onto it.

The album shows off the duo’s impressive musical evolution. There is no second wasted on “Jumpsuit,” the album’s opening track and first single. The heavy 4-minute song packs a powerful punch, complete with eerie lyrics and a beautiful pull-back on the bridge: “If you need anyone / I’ll stop my plans / But you’ll have to tie me down and break both my hands.” It is, perhaps, a cry to the band’s fans who have waited for new music after the duo’s long hiatus; it is an announcement that says: “Yes, we’re back.”

“Chlorine,” my personal favorite, is a further example of Tyler’s lush vocals. The song is beautiful and as catchy as the chemical dependency it speaks of. Every bit of it is musically dense, creating a wonderful sound that borders upon being psychedelic. It is an example of how Trench pushes the boundaries of their familiar sound. Many of the songs, like “Chlorine” or “Bandito” span over five minutes, which is longer than much of the duo’s previous works. But the experimentation pays off, resulting in a moving contemplation of death and mortality, with a mix of instrumental techniques.

Trench is an album that stares into the face of the human condition and the complexities of what it means to be alive in the modern age. “Neon Gravestones” is a stunning, solemn track about the glorification of early death and celebrity suicide. With the recent deaths of young stars like Mac Miller, the song touches in on a conversation that tends to be tiptoed over. The chorus, “Neon gravestones try to call for my bones”, filters through Tyler’s own suicidal desires and his awareness that if he “goes out with a bang,” everyone would “know his name.” Trench is a critique of young celebrity consumerist culture and how it is dealt with  on technological platforms, such as social media – the “neon lights” which the song speaks of. The sampling of Beethoven’s sonata creates another poignant dimension to the song, grounding the song in a musical tradition and asking listeners to reflect on how we view the artists we listen to.

“Pet Cheetah” is another song that asks its listeners to look into themselves by focusing on Tyler’s creative process. He raps, “This clique means so much to this dude / It could make him afraid of his music / And be scared to death he could lose it.” It is one of many tracks, like “Morph” and “Levitate,” which show off Tyler’s evolved flow. Trench is an impressive nod to his growth as a musician.

Although the album does contain weaker tracks like “Smithereens,” a love song to Tyler’s wife, and the underwhelming closer “Leave the City,” the album is consistently well-produced. No track feels like filler. Even the weaker songs carry a form of emotional catharsis, or a sense of nostalgic sentiment, or enhance the album’s narrative. You can still hear heavy influences from their previous two albums Vessel (2013) and Blurryface (2015) in their tendency to base their songs off of reggae to create a musical style that still sounds hopeful despite its dark lyrics.

Trench is an achievement. It evokes a sense of the personal from its creators and its listeners alike. Whether you’ve been a fan of Twenty One Pilots from the beginning, or are a new listener—you will find something on Trench that speaks to you. 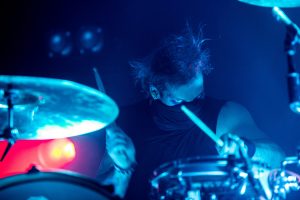