A federal judge sentenced Stephen Semprevivo, who paid a $400,000 bribe for his son to be admitted to Georgetown as a tennis recruit, to four months in prison on Thursday. The bribe was part of the college admissions scam unearthed in Operation Varsity Blues.

Semprevivo, a Los Angeles business executive, paid the sum to William Singer who facilitated the admissions scandal. This payment was used to bribe former tennis coach Gordon Ernst to have Adam Semprevivo, his son, admitted to the university.

Semprevivo pleaded guilty in May to a sole count of conspiracy to commit mail fraud and honest services mail fraud.

Federal prosecutors originally asked for a 13 month prison term, claiming that a lawsuit filed by his son against the university was evidence of Stephen Semprevivo’s lack of remorse.

Adam Semprevivo sued the university following his father’s guilty plea in an attempt to prevent his expulsion. The lawsuit claimed that Adam did not know of his father’s involvement with Ernst prior to the indictment.

According to the lawsuit, Adam Semprevivo blamed the university for “an arbitrary and capricious disciplinary process,” and deprived Semprevivo of his due process rights.

The lawsuit was dropped in July.

According to the supplemental sentencing memorandum submitted by prosecutors, “[The lawsuit] meets the classic definition of chutzpah: like the child who murders his parents and then pleads for mercy because he is an orphan, Semprevivo defrauded Georgetown, and then sought to hold Georgetown accountable (with damages) for not discovering his fraud. Semprevivo wants credit for contrition and acceptance of responsibility, but he exhibits neither.”

Semprevivo stated that he took full responsibility for his actions during his sentencing hearing.

“I deserve to be punished for the illegal actions that I took,” Semprevivo said in a tearful apology to the judge.

Semprevivo must surrender at a federal prison by Nov. 7. 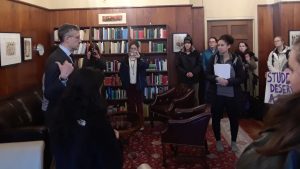