The Georgetown Alliance of Graduate Educators (GAGE) hosted a rally on Monday in Red Square the day before a bargaining meeting with the university. The group delivered over 500 signed statements, according to organizers, to the provost’s office in support of the GAGE’s efforts to secure a labor contract with the university.

After winning its election last November, GAGE officially became the union representing Georgetown’s graduate students who work as university educators. The group has spent the last eight months in negotiations for a contract with the university, according to GAGE leadership.

“Unfortunately, it has been eight months. We need to put some pressure on the administration to continue to bargain with us in good faith as they have agreed to do,” he said.

The group retweeted a message on Nov. 11 aimed at the university administration that reads, “We want our contract. Stop dragging your feet, admin.”

The university maintains that it is engaged in the negotiation process. “Georgetown is committed to continuing to negotiate in good faith and would like to reach a collective bargaining agreement during this academic year,” a university spokesperson wrote in an email to the Voice today.

“Since the election results were certified, Georgetown and GAGE/AFT began the collective bargaining process and have made progress and reached agreements on several subjects during negotiations this spring, summer, and fall,” the spokesperson wrote.

“We’re hopeful that tomorrow we might actually be able to work out some of these issues. I think we’re close to coming to an agreement,” said Deidre Nelms, a member of GAGE’s bargaining committee and a teaching associate. As key goals in the bargaining process, she referenced expanded healthcare coverage and a new grievance process for handling cases of sexual harassment and other complaints. 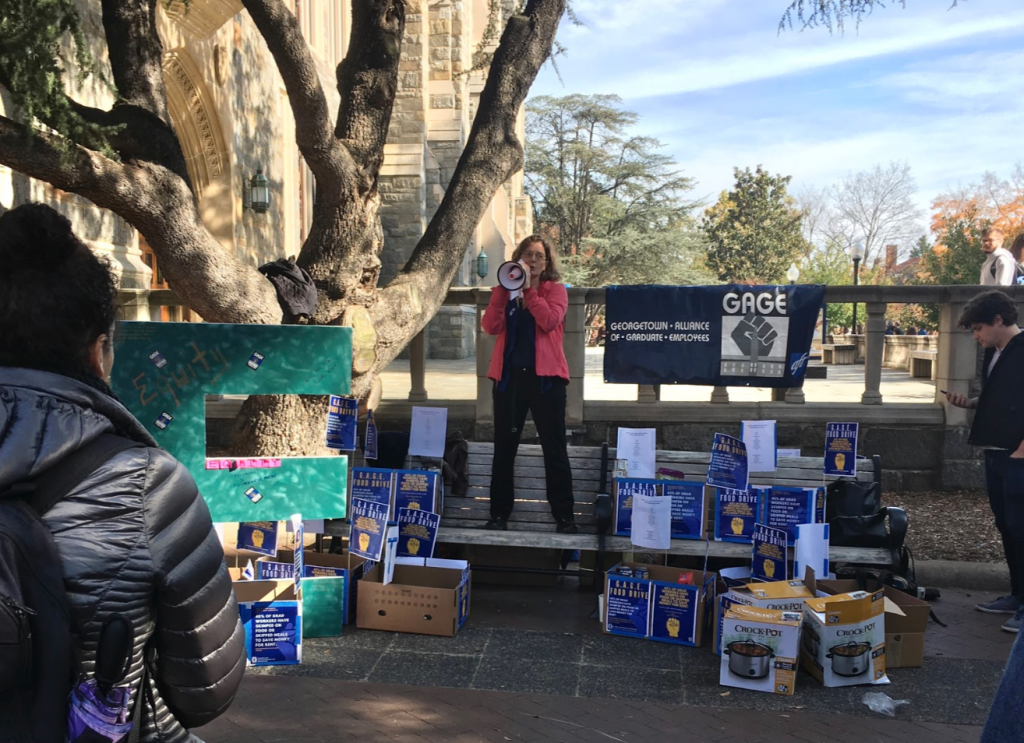 Dr. Sara Collina, an adjunct professor in the Women’s and Gender Studies Program, spoke at the rally on the importance of better addressing issues of sexual harassment and assault among graduate students. “Female graduate students, women-identified graduate students, are being sexually harassed and assaulted right here, right now. That is a disaster, and it’s an emergency,” she said.

Young also mentioned other issues graduate students face within the university’s various departments. “The [graduate students employed as] scientists are still working 50, 60-hour weeks in their labs for a 15 hour stipend. The historians are still learning about their teaching assignments two or three days before they begin teaching those courses, which are oftentimes not in their fields,” he said. “We need more transparency, we need more say over our working conditions, and our contract is going to get that done.”

RE: Ethics and individual rights and responsibilities of the electorate in a democracy: we still need Ward 2 registered voters to sign our petition to recall Council Member Jack Evans.
How can I access GU students who are registered to vote locally? Please advise, as timing is urgent. We need enough new signatures to give us a margin of error.
Please contact me, as we all know what we need to do to retain rights and build power.