From the beginning of Chris Distefano’s show, he seemed to immediately click with the audience. Between his impressions of millennial culture and the ease with which he talked about his private life, it was clear there was a certain “inside joke” quality to the way he presented his humor, making me feel like I was let in on some secret club that only existed in that room. But my relationship to this club has apparently been around much longer in my life than I previously thought as of three weeks ago.

Distefano has been popping up randomly in my life unbeknownst to me since I was 13 years old. From late middle school to early high school, I spent many weekends at my best friend’s house, me showing her all the dogs that I planned on owning when I got older and her showing me all the reality TV shows that she loved. I remember at some point, she started watching a show on MTV called Girl Code, and then eventually the male equivalent called Guy Code. On it, guys would be asked questions about relationships, friendships, and growing up, and they would give their funniest—and sometimes even truthful—answers. I thought the show was entertaining enough and probably binged a good few hours of it with her. At the time, however, I didn’t pay attention to any of the comedians or their names in particular, and wouldn’t realize until four years later that one of those guys was Chris Distefano.

The summer before I came to Georgetown, I started watching this new Netflix show called the Ultimate Beastmaster. At that point, in the midst of dealing with a lot of emotional problems, I was looking for something mindless to watch and boy, had I come to the right place. The show is basically American Ninja Warrior, but contestants are chosen to represent a group of 13 countries, with each country getting two athletes apiece. Two commentators from each country set up in a semicircle of booths next to the dragon-shaped obstacle course, providing culturally relevant jokes and cheering on their respective athletes with, at times, a little too much enthusiasm (I’m looking at you, South Korea). From the dramatically named “Beast’s Blood” water to the corny, fake feuding that would go on between the countries’ hosts, this show was chock-full of ridiculously over the top elements that frankly made it the perfect thing to distract my brain from real-world problems. Again, I didn’t pay a ton of attention even to the American hosts of the show, which happened to be Tiki Barber and, coincidentally, Chris Distefano. The only recognition I remember having was a feeling of slight familiarity towards his distinctive Brooklyn accent.

Fast forward a few months. I’m laying in my bed in my dorm room, getting sucked into a black hole of YouTube clips of Andrew Schulz’s stand up comedy (also a former cast member of Guy Code). I click on a recommended video of some other guy doing stand up about 9/11. As I’m watching the video, marveling at the guy’s comedically agitated state, I slowly realize that I’ve seen his face before and wonder how I know him. I watch a few more of his videos, but it’s still not hitting me. It would take another few months, and offering to go see his show on behalf of the Voice, before all the memories I had of watching Guy Code with my best friend came rushing back. It would also then take Distefano talking about Ultimate Beastmaster in his set for me to realize his hosting of that show. Needless to say, I can sometimes be pretty forgetful.

Now back to Distefano and his show on Feb. 8. The Club at Studio K, the Kennedy Center’s brand new club-style venue for small acts, was certainly an interesting place for a show like Distefano’s. When I think of the Kennedy Center, I think of professional ballets, operas, and musicals, but Studio K has an entirely different feel. It’s small like any other comedy theater, with round tables for the audience to crowd around in groups of four, but also has dramatic blue mood lighting like a lot of other party clubs in D.C. In my opinion, the bougie-ness contrasted beautifully with Distefano’s energized, unapologetic routine. From the beginning of the set, his quickness and his intolerance towards dead air were intense, making every little filler word pop with nervous energy, Distefano even smiling despite himself at his own jokes and, possibly, from anxiousness. After a while he gradually mellowed out, settling into a series of stories about things ranging from his ex-wife, his felon father, and his young daughter to political correctness and the intensity with which gay couples fight.

His emphasis on his frustration with political correctness and cancel culture, peppered with some purposefully borderline offensive racial jokes, was probably one of the biggest themes of the night. This is something that I’ve noticed with a lot of other comics in the past year as well, this pushback against what they perceive as a growing policing of words and jokes that people are “allowed” to make. My personal opinion about the whole situation is a little complicated, and also comes from a lack of experience performing comedy, but Distefano’s opinion certainly resonated with me: (paraphrased) “Comedy is all about almost crossing the line, tiptoeing up to it and dancing near it. That’s why you guys are all huddled into this room with the lights down, so we can all be dirty in here together.” I personally love Distefano’s characterization because it not only describes the inherently provocative nature of the best forms of comedy but also makes clear that there are instances when a line is crossed, and those instances are not acceptable. The biggest message I believe he was trying to convey was that there might be a need for us as a society to reexamine how we go about discouraging bigoted and hateful speech, especially in the realm of comedy, which, when it comes down to it, is meant to all be jokes.

I appreciated not only his material—especially his bits about his sensitivity as a friend—but also the honesty he brought to a pretty liberal city which, in theory, could have reacted negatively to his ‘tip-toeing’. Between comics like Distefano continuing to push the boundary of what’s funny and others aiming to create a more emotionally sensitive space, I hope eventually we’ll reach a more balanced environment within comedy where creativity is valued above all else. Also, the shirts he was selling outside of the club were of him with George Washington’s hair, and that’s pretty great. 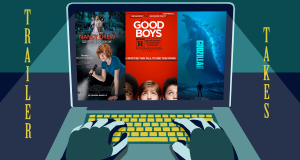