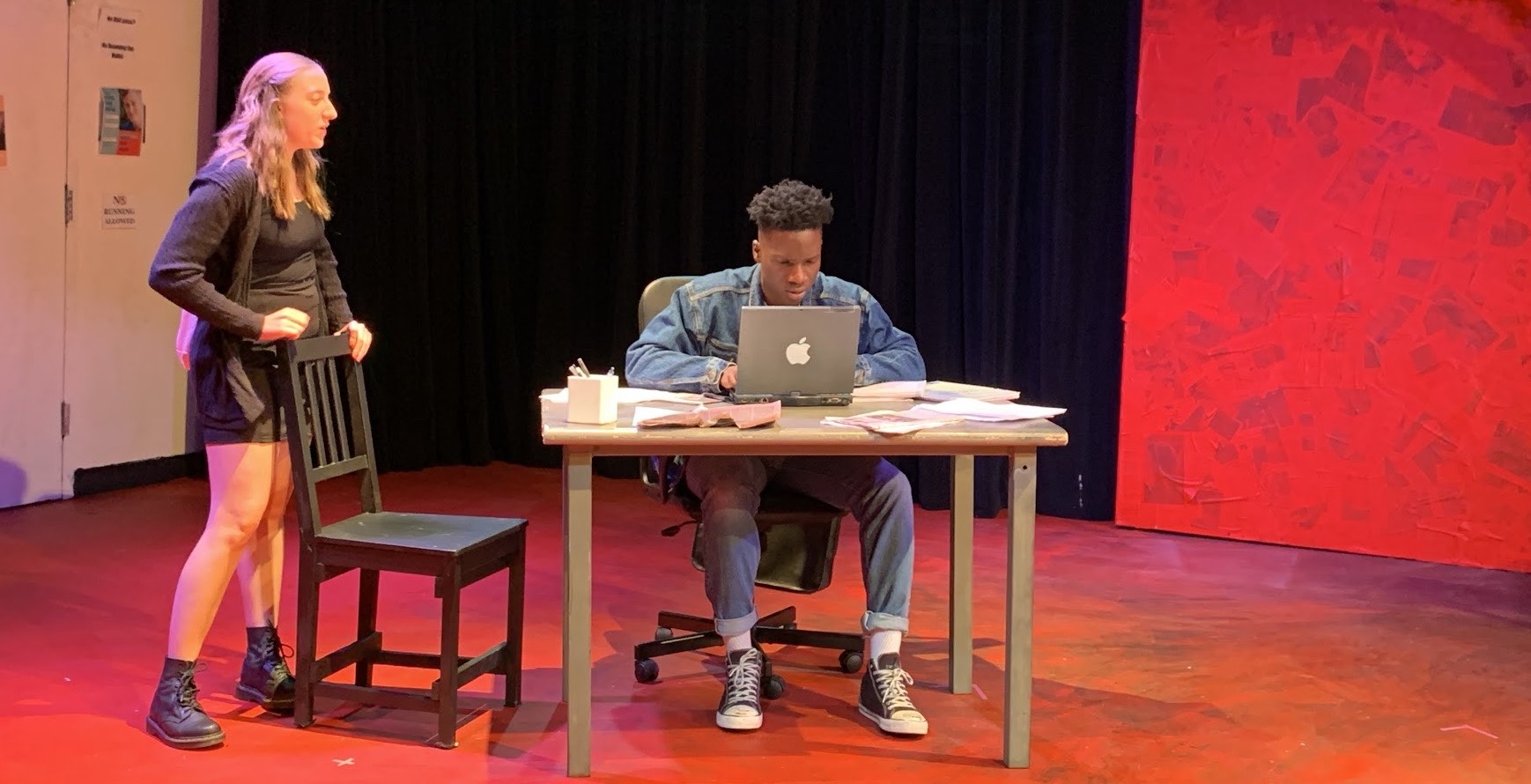 A red wash covers the floor and walls of the set of Blood at the Root, Georgetown University’s Black Theatre Ensemble (BTE) spring show. The hue, imbued by both painted sets and artful lighting, creates the tone for the uproar of change, the intricacies of relationships, the demands of the present, and the impressions of the past that engage every aspect of the play. With careful insight and commitment to honest story-telling, the production artfully undertakes sensitive yet poignant matters: racial tensions, identity formation, and simply growing up.

Playwright Dominique Morriseau weaves complexities into Blood at the Root, the plot of which comes from the 2006 Jena Six case. Following a series of racially charged incidents at Jena High School in Louisiana, a group of African American teenagers were arrested for allegedly assaulting a fellow student, who was white. The case became infamous for its fallout, which demonstrated heavy racial biases within the United States legal system: The six boys, the oldest of whom only 17, were charged and held as adults.

Questions of morality and justice are at the center of the play, and the spectrum between right and wrong immediately comes to mind when gazing at the stage: A pretty flower-adorned tree stands at its center, which glows from the light of the red walls and floor. To the left of the tree, a high balcony looms above a set of lockers. The conflation of inside and outside, nature and manmade structure, distinctly captures the intricacy of the unfolding situation. “Come in with questions and leave with questions because none of this is easy,” director Simi Sonubi (COL ’20) said. “All of this is gray, none of this is black and white.” 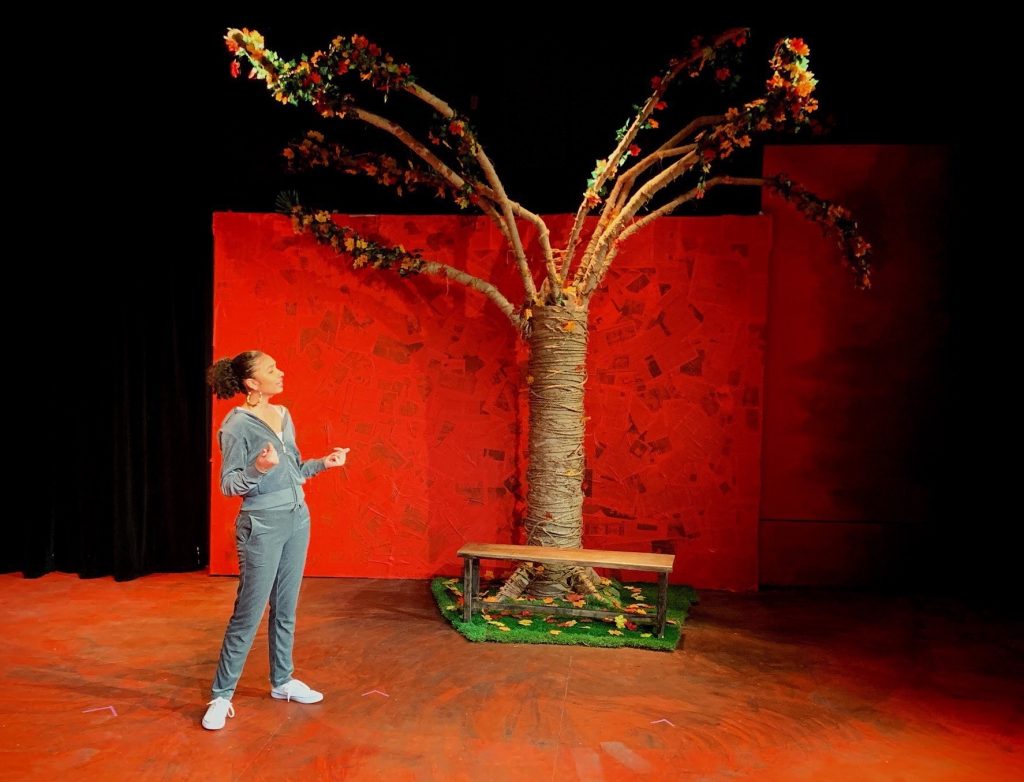 The play follows students during their last years at the fictional Cedar High School, and from the moment the whole cast bursts through separate entrances to start the play, a promise of change hangs in the air. Senior Raylynn (Monique Wilson, COL ’22) hopes to break the pattern of Cedar High’s student government by becoming the first black female class president, and Toria (Kathryn Baker, COL ’20), a student journalist, eagerly searches for a groundbreaking story. However, others are struggling: New student Colin (Benjamin Eneman, COL ’21) tries to find his bearings, while Justin (Samuel Oni, MSB ’22), the head of the school paper, tries to stay afloat. Many seem to be hiding their own troubles as well. Raylynn’s friend Asha (Olivia Baggott, COL ’22) and Raylynn’s brother De’Andre (William Hammond, SFS ’23) each harbor their own emotional and familial difficulties.

The actors perfectly represent the dizzying time of high school, when students are starting to come into themselves and face the real world. The smooth, light creeping of beats in between set changes matches the quintessential ticking of the clock—graduation looms. These coming-of-age moments include one of the characters grappling with their sexual identity, a topic that, especially 13 years ago, faced its own challenges. Blood at the Root also spurs the audience to consider both the similarities and stark contrasts of racial and sexual identity-based discrimination. Yet, the passionate, socially-conscious discourse that the play engages in is also balanced smoothly with more humorous and fun moments. In one scene, teens congregate in the lunchroom and gossip quickly, volleying conflicting “I heard”s back and forth while still constructing a narrative.

Baker’s inquisitive and somewhat relentless Toria brings the perfect combination of determined student and young changemaker yearning to expose the troubles underneath the facade of normality. Soon enough, the ordinary school setting reveals cracks—and then crumbles: After Raylynn deliberately chooses to sit under an old tree that usually only white people sit under, a shocking attack on the town’s African American community reveals lurking animosity. 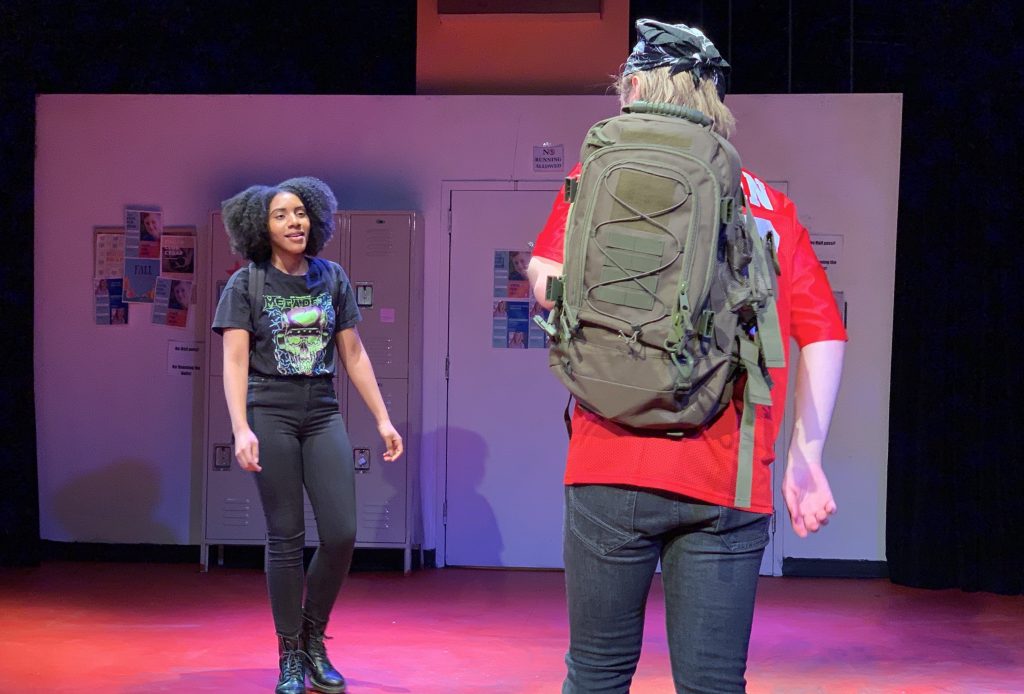 Everything spirals in quick succession, and some suffer under the weight of the pressing topics. Justin’s curious, uptight demeanor heartbreakingly deconstructs during the explosive, emotional apex of the play. Oni’s stunningly raw performance is sure to move any audience member, as Justin struggles to find his voice and identity, but he is not alone. Somewhat of an outlier of group, Asha suddenly finds herself facing a test of character. Baggott magnificently portrays the unsure, flawed yet goodhearted, Asha. In regard to the limbo in which Asha finds herself, BTE decided to change Morriseau’s original casting of the actress. “She’s originally written as a white woman. We decided to cast a black woman and make her mixed-race character because we felt her lines could speak to that notion of being fought between two different identities,” Sonubi said.

However, other students choose to rise to the test, showing that choices determine what a person’s values are. Wilson, as protagonist Raylyn, stands strong as a young leader bent on inciting change, from deciding to run for class president, to leading the school’s protests. The protest scenes are the standout moments of Blood at the Root: In one, the whole ensemble stands in a 90-degree formation and chants, emoting unity and strength. The music also reflects the increasing intensity, as it transitions from lo-fi beats to more percussive elements, such as police sirens. One of the most remarkable moments is the sound of Hammond’s stellar performance as an imprisoned De’Andre, who raps behind jail bars.

The actors’ synergy and rapport help to construct this troubled world that reflects many aspects of our own. Likewise, the whole crew comes together in an effort to tell the tale of Cedar High. “It’s all my team. I really feel like as far as what you see what you hear during the play, that’s definitely all them, all of their creativity, where their brain juices are flowing,” technical director Kyndra Lundy (COL ’22) said about every department’s role in the production. “Everything you see in here is on purpose.”

Possibility lurks on the edge of a new day, and the students of Cedar are ready to confront it head-on, with signs held high. Blood at the Root forces one to evaluate society and not be afraid to take a stand. At its core, Blood at the Root showcases a single person’s and a unified group’s pivotal role in social justice. “These sorts of issues aren’t very clearly delineated in some regards, but nonetheless, there are very real moral stakes in the play,” Eneman said. “If we don’t take a stand, if we don’t do something about whatever, then we’re just kind of letting history, letting pre-existing social conditions, status quo dictate what we do.” Change demands immediacy: Like the slogan for Raylynn’s class president campaign, BTE’s spring production advocates a message of hope and perseverance: “It’s just time.”

Blood at the Root will run through Feb. 29 at the Village C Theatre. 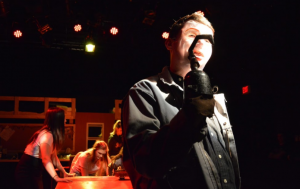