Four years ago, during his speech at convocation, the Dean of the College said that the people around me, robed in polyester gowns, would dance at my wedding. Besides a few high school classmates, the only people I knew in the crowd were my parents.

My mom, dressed in her own gown—a privilege for alums—waved at me. Since high school started, she had mentioned Georgetown and her college years during every trip to D.C. to see family. In between visits to the monuments and my parents’ favorite haunts from the decade they spent in D.C. after college, she walked around campus with me. The buildings which have sprung up since her graduation did not interfere with her tours because the spirit of Georgetown, she said, was unchanged.

She showed me Henle, where she met some of the friends who would go on to dance at her wedding, and Harbin, where Bill Clinton lived. She showed me the house on 37th, painted orange now, where she and her friends lived senior year. Some of the women she lived with are close friends to this day, the sorts of people I want to have in my life a few decades from now. But most of all, she told me about the Tombs.

Back then, the drinking age was 18, and it sounds like she took advantage of it. Legend has it, Student Affairs would put a keg outside each dorm on Fridays, free for everyone. Once a week, the pub in Healy ran a promotion called “Beat the Clock.” Starting in the afternoon, beer cost a nickel. Every subsequent half hour, the price would go up another nickel, and $5 withdrawn from an ATM in the theater next to Healy was enough for the whole night. On Saturdays, the police would bring a paddywagon to M and Wisconsin to hold all the minors they had busted that night.

As they got older, they found a second home at the Tombs. She and her friends would occupy the bar, decorated then just like it is now, for hours at a time.

These days, there are no kegs in front of dorms. There is no pub in the basement of Healy, let alone one offering beer for a nickel. There is barely any nightlife in Georgetown at all.

But the Tombs lives on. The World War Two propaganda posters still hang around the bar, screwed into place so patrons won’t knock them off the walls. Oars hover over the fireplace and obscure magazine covers characterize the decor. Old bartenders’ names are mounted on the bar, right where your drink sits.

In February, I accepted the Tombs’ annual challenge for seniors. On every one of the last 99 days of senior year, I planned to descend into the Tombs and hand the bartender my ID as proof of my attendance. I found the cheapest items on the menu and set aside enough money for all the checks. If you make it, they’ll put your name on a plaque, and how can you put a dollar value on that?

Now, I can recite the daily specials by heart and I know the names of all four managers. I know which D.J. is good and which ones are bad. Based only on the fraction of the crowd at the bar I know, I can predict whether it’s going to be a good night at the Tombs.

We seniors have a weekday night dedicated just to us. Wednesday nights feature student D.J.s and a group of regulars whose faces, if not names, I know from class. They order drinks from waiters who were in their freshman seminars or on their freshman floors.

But not anymore. Since the quarantine started, I’ve spent the last two months cooped up in my house off campus, my remaining roommates my only company. With my new free time, I’ve been trying to come to terms with this abrupt end to my senior year.

The smallest tragedy of the coronavirus is the Tombs. They stopped counting the 99 days after DeGioia told us not to come back; we had made it through 38. There would be no more afternoons spent in a Tombs booth proofreading emails to prospective employers. Tuesday night Trivia is now a thing of the past, and it doesn’t matter anymore that most of the D.J.s at the Tombs leave something to be desired. Still, I’d give anything to go back.

I had planned on two more months to say goodbye to my best friends. I had planned to introduce myself to the people whose faces I know but whose names I have forgotten. I had planned to occupy the Tombs for hours on end and get to know the classmates I met in my last semester.

I won’t get to do any of that, but I think it’s going to be OK. Pandemic-related spending cuts notwithstanding, the pace of construction on campus promises to make me feel like a stranger in the place I have called home for four years. Still, I know the spirit of Georgetown my mom still sees here will survive.

Soon, the weddings will start. And then, hopefully quite a few years from now, there will be mine. On the dance floor at the reception, as scenes and faces from McDonough and the Tombs flash before me, none of us will be wearing polyester gowns. We’ll still dance the same, though: terribly, but with enthusiasm. I only hope the D.J. will be excellent. 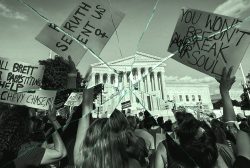 I take it back well said Jack you rock