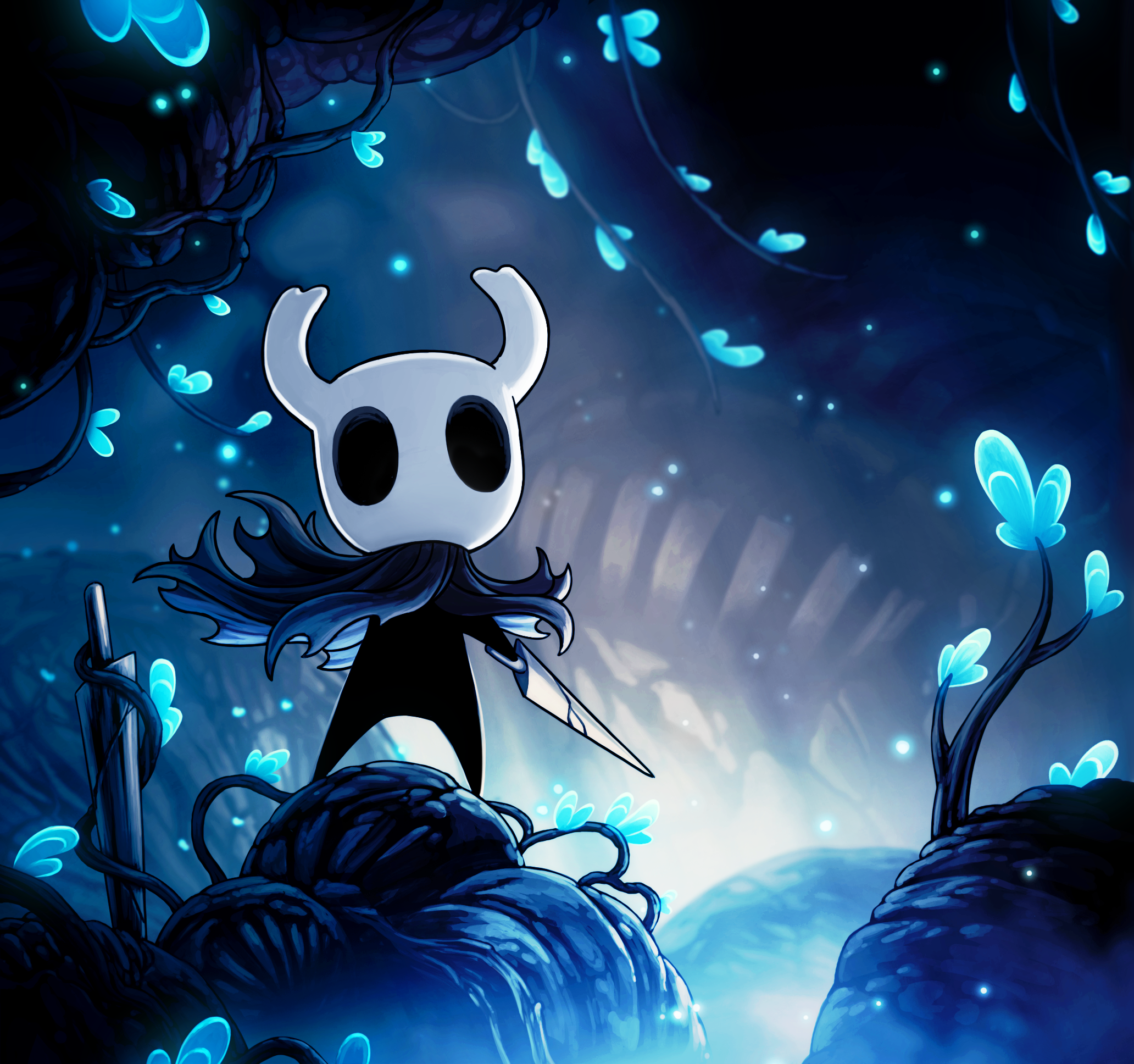 There’s nothing more enticing than a story about the unknown. The reward and exhilaration that come from asking questions about things we don’t understand, then daring to uncover the answers, are the reason so many incredible narratives revolve around solving mysteries. That’s why, when I played Hollow Knight (2017) for the first time this summer, I was captivated almost immediately.

Hollow Knight, developed by Team Cherry, is a side-scrolling action-adventure game that follows a small bug knight as he explores the ancient insect kingdom of Hallownest. The game takes its inspiration from a number of sources, most notably classic 2D adventures like 1994’s Super Metroid, as well as more recent combat-exploration games like 2011’s Dark Souls. Completely hand-drawn by Ari Gibson, Team Cherry’s co-director, and scored by Christopher Larkin, the world of Hollow Knight is beautiful, somber, and wonderfully mysterious.

As they enter the world, the player takes control of the Knight, a silent, otherwise unnamed protagonist, as he arrives in the mostly deserted town of Dirtmouth. Soon after arriving, the player discovers a well just outside of town which, upon entering, reveals a sprawling subterranean landscape filled with twisting pathways, glittering treasures, and dangerous encounters. From there, the game proceeds in a largely non-linear fashion. Barring some pathways untraversable until later, the player is free to begin their mission of charting the vast ruins of Hallownest.

It’s this premise that makes Hollow Knight so immediately enthralling. Upon beginning the game, Team Cherry bombards the player with intrigue: Who is the Knight? Why is the player exploring Hallownest? What secrets are there to be found within the kingdom’s territory?

While the answers to these questions are satisfying on their own, the game’s structure is what makes their reveal so compelling. Unlike films or books, where the consumer is an external participant unraveling the plot in a predetermined way, the narrative pace of a video game is determined by the player. Hollow Knight grants its players the ability to proceed in that narrative non-linearly. They learn about Hallownest and their role in it through their own choices: which characters they interact with and corridors they decide to enter. This holds true all the way through to the finale of the game, which sports multiple possible endings depending on what decisions the player made prior to the story’s conclusion.

Beyond the plot, the main draw of Hollow Knight is its vast, intricately crafted world. With the help of Cornifer, a friendly weevil and aspiring cartographer, the player creates maps of ancient ruins as they descend further into its depths. Hallownest features a wide array of landscapes, ranging from the lush forests of Greenpath to the rocky Crystal Peak. Each of the fifteen areas is linked together in a large, cohesive tapestry on the game’s map, yet they remain distinct enough to possess their own identity and atmosphere. This feat is especially impressive, considering Team Cherry is made up of only three people.

Equally as commendable is the way Team Cherry presents this world. Hollow Knight’s entire aesthetic centers around its indisputably pensive tone: The palette is filled with deep blues and purples, the soundtrack is peaceful yet melancholic, and the dialogue is almost poetic as the characters wandering the ruined kingdom wistfully talk about hopes, dreams, and regrets.

While the Knight may be a tiny, empty vessel, the cast of critters he comes across while exploring is anything but. The player’s chance to meet characters like Zote—the grumpy and overconfident knight—and Quirrel—the curious, friendly explorer—and encounter them again later on their journey does a lot to make the world feel alive and independent from the Knight’s quest. Seeing these miniature side-stories progress as others also venture deeper into the insect kingdom is charming and fulfilling.

That said, not every character the player encounters will be so welcoming. In fact, Hollow Knight’s combat is a major component of the moment-to-moment gameplay and will determine whether the player is skilled enough to continue their journey through the ruins. In this respect, the game can be somewhat unforgiving—there is no easy mode, and the game does not shy away from presenting the player a challenge, forcing them to improve before letting them proceed. This is where the comparison to Dark Souls becomes most apt, as the tight controls and tough-but-fair design makes every battle feel rewarding to overcome. Even when I failed and was forced to retry an encounter five, 10, or 15 times, it never felt as though the game was asking too much; rather, it simply meant that there was more for me to learn in order to succeed. With each battle, I could feel myself improving at the mechanics of the game—and each hard-earned victory felt immensely rewarding.

The best combat encounters Hollow Knight offers are undoubtedly its boss fights. As the player continues charting Hallownest’s caverns, they will occasionally stumble upon a creature that blocks their path forward, either literally or through their possession of some ability the player must acquire in order to proceed. Whenever that happens, get ready—the challenger will not go down easy.

A good example of a boss fight can be found deep in the Fungal Wastes, where the Mantis Lords block the player’s path forward into the harrowing Deepnest. When I first stumbled upon the three sisters sitting upon their thrones, I was bested almost immediately and forced to try again. After the first few tries, however, something began to click. The way they telegraphed their movement, animatedly leaping across the battlefield with spears in hand, gave me just enough time to react and let me adapt my own strategies. The incredible musical score, bursting with tremolo strings and harpsichord, made the combat feel almost like a graceful, deadly dance. Upon victory, I was not only rewarded with a new area to explore, but also with the satisfaction of knowing that I had visibly improved.

There is still so much to say about the world Team Cherry has created. It’s bursting with life, challenge, and ambience. The score and sense of style are immediately identifiable. The items and abilities found within make the player feel empowered, even as the combat forces them to rethink everything they thought they knew about how to play. Ultimately, though, Hollow Knight is a game best experienced, rather than described secondhand. Getting lost in Hallownest is a joy, and I cannot recommend it enough.