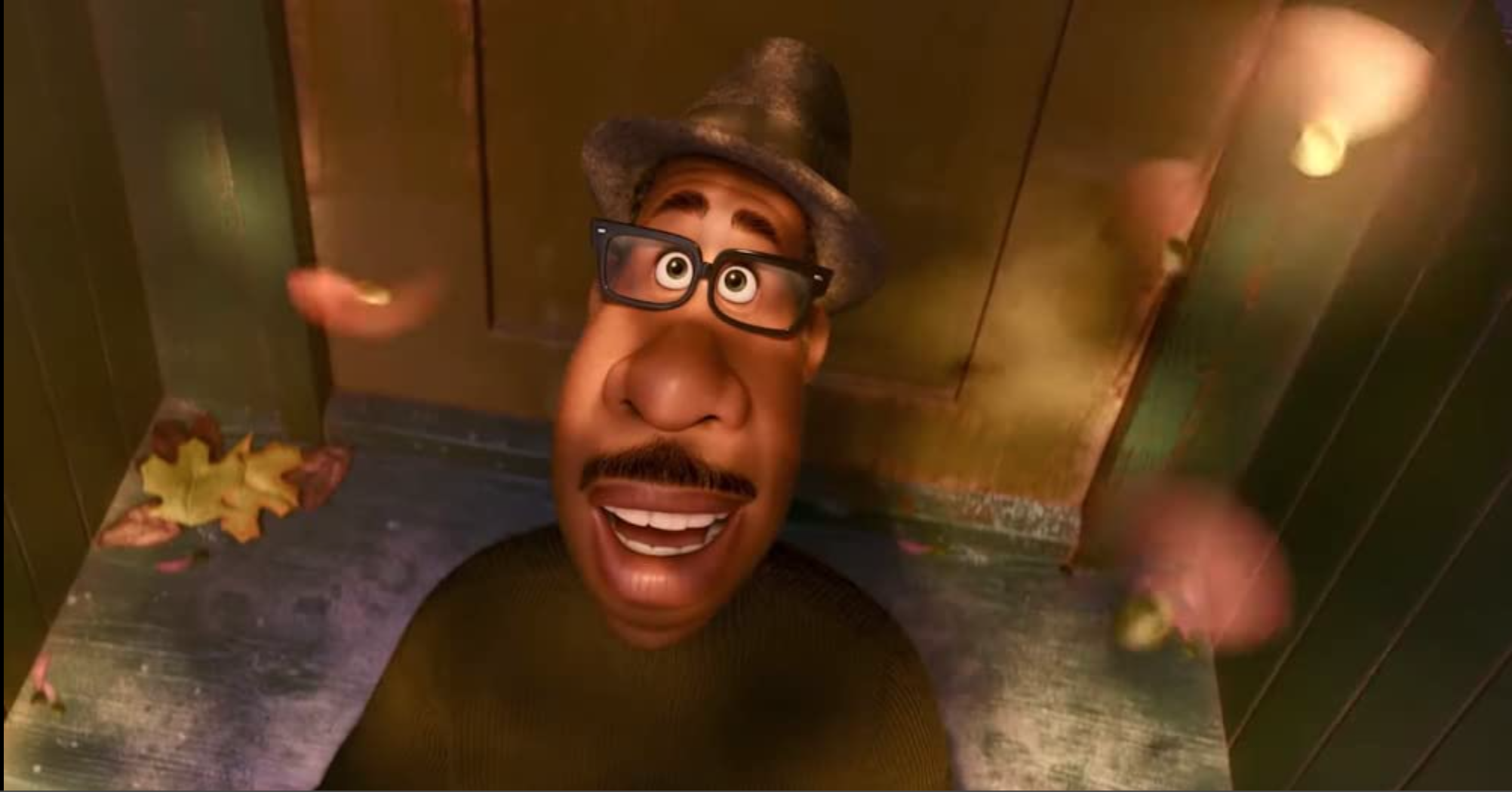 Pixar specializes in embedding deep, existential lessons into gorgeously animated masterpieces, and Pete Docter has accomplished just this with Soul (2020). The film conveys a poignant message that all adults must hear through a gentle format fit for kids. The animation stuns, which is to be expected in a Pixar film, with strikingly detailed New York City streets, backlit scenes in jazz clubs drenched in warmth and shadows, and dazzlingly conceptualized metaphysical settings called the Great Beyond and the Great Before (or You Seminar, as it is alternatively referred to). Furthermore, the score was expertly composed by Trent Reznor, Atticus Ross, and Jon Batiste, and it serves as a moving companion to the emotional moments that make the film shine. Most importantly, however, the underlying moral of the story about life, identity, and work is one that often gets overlooked or lost in the everyday bustle. Soul explores these themes through the comically boisterous shared journeys of Joe Gardner (Jamie Foxx), a middle school music teacher that dreams of being a professional jazz pianist, and 22 (Tina Fey), a sarcastic and jaded soul who has spent thousands of years in the Great Before.

Soul opens with a cacophony of instruments played by bored school children in a music class taught by Joe. As he earnestly tries to impart an appreciation of jazz onto his students by sharing the cherished memory of an outing with his father that exposed him to the genre’s allure, he manages to entrance them for a moment. Just then, he is interrupted by the principal, who informs him of the school’s decision to convert Joe’s part-time status to full-time, thus earning him all the fun stuff, like a pension, insurance, and job stability. However, this becomes the catalyst for Joe’s crisis. Rather than feeling relieved, he begins to feel trapped and unaccomplished, considering his long-time dream of being a professional jazz pianist.

Joe soon sees an inkling of hope, as he gets the opportunity of a lifetime to audition for an available position in his idol Dorothea Williams’s (Angela Bassett) band. The audition scene, albeit like every other scene, is teeming with radiant animation and raw emotion. The jazz club  is shrouded in shadows, with a tender glow appearing on Dorothea. This reflects Joe’s admiration for the musical legend in front of him, along with his timidness in trying to impress her. The experience of playing the piano is extraordinarily sentimental to Joe, as we see him getting lost in the music and transported into a world of his own, bathed in a symphony of blue and violet hues. Dorothea recognizes his talent and passion, and awards him the spot.

In his excitement after being given the job, Joe absentmindedly prances through New York, sharing his good news over the phone. The meticulous details of the storefronts and streets yet again underscore the impeccable animation. Suddenly, Joe fails to spot an uncovered manhole and falls in, which ends his life and lands him on a cosmic walkway leading souls to the Great Beyond. Determined to find a way back to his life since he had only just accomplished his lifelong dream, he pushes through the crowd of transitioning souls and manages to fall off the walkway and plunge through space and time to land in the Great Before, where new souls’ personalities are molded before they are sent down to Earth.

In the Great Before, Joe is assigned as a mentor to Soul 22, who has been around for thousands of years, rejecting every past mentor’s efforts at helping them complete their personality by finding a “spark” or passion. Joe and 22 soon manage to find a loophole that lands them back on Earth, but with a twist: 22 is in Joe’s body and Joe’s soul falls into the body of a therapy cat, Mr. Mittens. As the disillusioned 22 gets to experience life on Earth, they realize that there is so much beauty everywhere that they never even considered. Simultaneously, Joe is so transfixed by his own goal that he ends up selfishly hurting 22’s feelings and discouraging them further. In the turning point that follows, Joe slowly begins to see the world through 22’s eyes and comprehends his errors. All his life, Joe kept struggling to chase after that one big break that would allow him to become a professional jazz musician, and he saw the gig with Dorothea as the biggest gift of his life. But by the end, Joe ultimately understands that the job opportunity wasn’t the gift, but rather life is, along with all the small moments and connections with other people that it brings.

Soul is a seminal movie that should be shown to anyone who feels they’re at an artificial precipice that demands an answer to the age-old question of “what do I want to be when I grow up?” The movie demonstrates that the answer to that question isn’t (and shouldn’t be) as clear-cut as people may desperately want to believe. Living doesn’t necessitate allocating every ounce of importance into our job title or needing that to represent our identity, because our identity is much more complex and multi-faceted than just our spark, as Joe and 22 jointly discover. 22 felt unmoored for this very reason — they were looking for their spark for thousands of years, thinking that’s what would define them, but after jumping into life on Earth, they realized that the true magic was in all the “normal” experiences and interactions of daily life. Rather than letting life slip away while desperately trying to find a missing spark that they thought was necessary to live, it was important to do simply that: live. The movie therefore reveals the wonder in the subtle moments of everyday life; big events and milestones pass as quickly as they arrive. When 22 is in Joe’s body on Earth, they are enamored by the autumn scenery, the musician performing in the subway, a spool of thread, and a slice of pizza. All of these things were just part of everyday routine to Joe, and 22’s awe inspires him to stop taking life for granted.

We sometimes get so caught up in finding that one activity or job that is meant to be our purpose, whether that is being an athlete, musician, or a hedge fund manager, but Soul encourages us to shift our perspective and see that our careers are only one small facet of our personhood, which is infinitely more nuanced. We’d be doing ourselves a disservice by pigeonholing our identity that way. The film also reminds us to embrace those around us in the same way we should embrace our environment. Joe’s mentor relationship with 22 is profoundly touching, because Joe grows along with 22, and learns as much from them as they do from him.

According to the directors, Pete Docter and Kemp Powers, there were multiple endings sampled, but the one that made the cut is arguably perfect because it allows for some interpretation, while also saluting life’s natural uncertainty, and the freedom to be found in it.