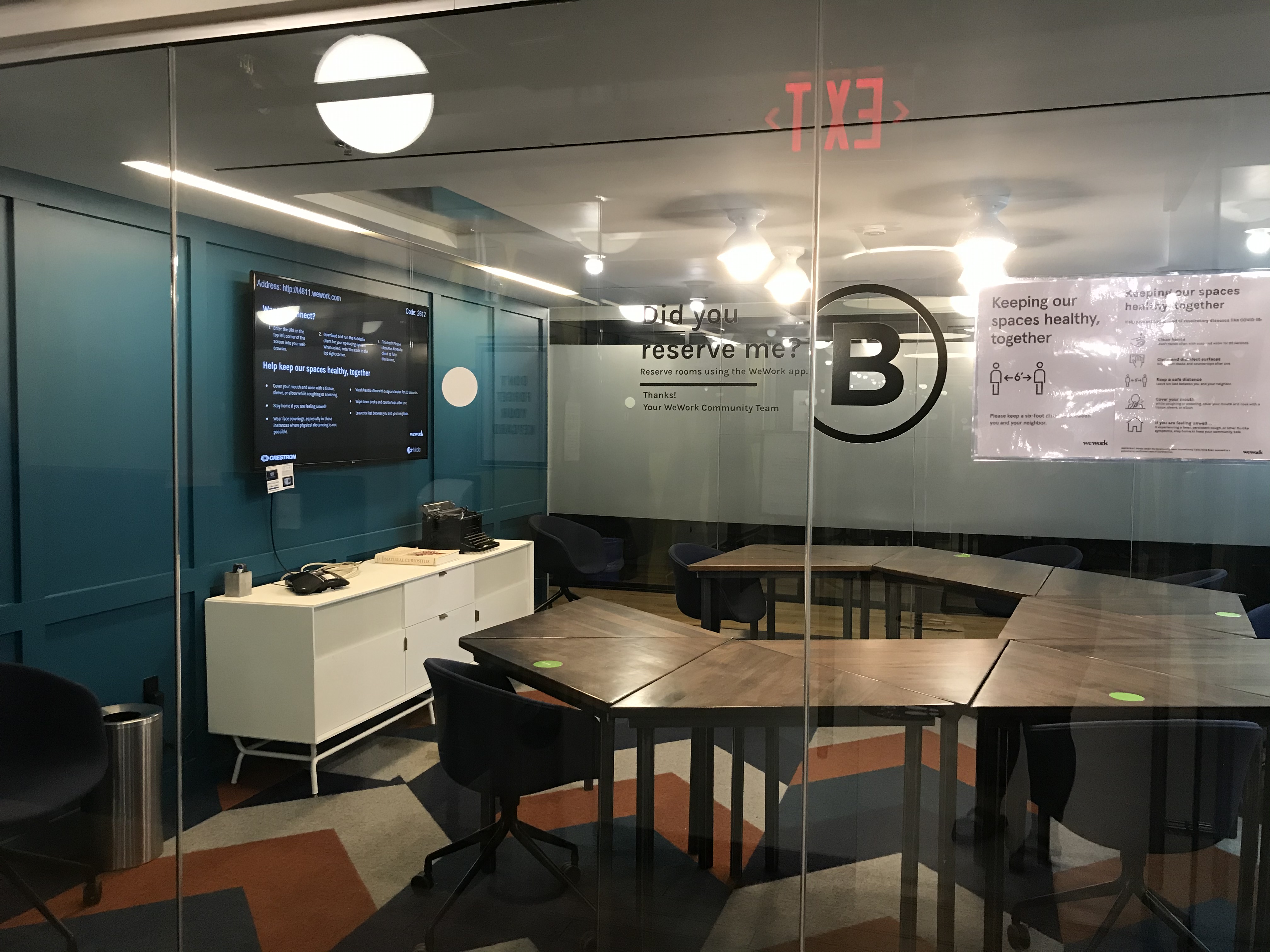 Georgetown’s partnership with the shared workspace company WeWork aimed to give many students much-needed study space during a second virtual semester. While hoping to improve the study conditions for students, the program has also highlighted disparities in resource access and opportunity in the student body.

The subscription allows eligible students to book a desk at any location, provided that desks are available given space-limiting regulations due to COVID-19. Georgetown students have full access to complimentary amenities that vary at each location, ranging from workplace basics like WiFi, printers, coffee, and tea to more site-specific perks like kombucha dispensers, board games, and ping-pong tables. Students can also book a WeWork conference room for a total of five hours throughout the semester, using an allotment of credits purchased as part of Georgetown’s plan.

WeWork, an urban workspace-sharing real estate company, has developed over 800 locations in 119 cities around the world in the last ten years. Their properties span every continent except Antarctica and are generally located within urban or suburban areas.

Georgetown students have free access to WeWork from the start of their program activation until May 19, 2021, and they must register with their NetIDs on the Georgetown page of WeWork’s website. Students must also abide by two special codes of conduct set forth by WeWork, entitled “WeWork House Rules for Georgetown University Students” and “the Georgetown COVID-19 Addendum.”

In an email sent to students last November, Provost Robert Groves announced the launch of the program beginning on Feb. 1. According to the email, undergraduate and graduate students enrolled in spring courses, including law students, medical students, and Ph.D. students writing dissertations, are eligible for WeWork access. The email noted that while students in WeWork locations would not be subject to the terms of the Georgetown University Community Compact, they would be expected to adhere to any health and safety requirements set forth by WeWork itself.

Initial enrollment in the program triggered confusion as some students discovered that “all-access” has its caveats. Though students have unlimited usage of desk space in all WeWorks, student access to conference rooms is limited to five credits, or five hours of usage, for the entire semester, a detail that was overlooked by many who started off booking beyond that limit. Camber Vincent (SFS ’24), who has used a WeWork outside of D.C., was one student unsure of the credit policies.

“One of the problems that we ran into was with conference room booking with the use of the credits, which I think was poorly communicated on Georgetown’s part. A couple of people I know got that email saying that their WeWork membership is at risk of termination because they overused the credits before they even knew about the credit limit.”

Despite the complication, Camber has benefited from Georgetown’s partnership with WeWork. “It makes me feel really productive,” he said. “It’s nice to go sit in a conference room with friends and be able to get work done in a space that’s not an apartment.”

In the United States, WeWork has virtually no locations outside of cities and their immediate suburbs. Since the system was designed with white-collar professionals in mind, its locations cater toward traditional centers of large-scale office-usage. Rural and low-income students who lack the means and time to get to a WeWork in a city find themselves unable to take advantage of a program meant to benefit the entire student body.

Health regulations pose further concerns, as Georgetown cannot enforce its health and safety code on WeWork properties and relies on WeWork to enforce its own regulations. Students have reported relaxed mask-usage and large numbers of users at certain locations, questioning WeWork’s ability to truly mitigate the spread of COVID-19.

“It’s kind of weird for Georgetown to use COVID-19 as justification for not opening their buildings and then spend money on a coworking space where they have no control over how students act,” Shevani Tewari (SFS ’24), a native of the DMV area, wrote in an email to the Voice.

“At the WeWork I go to, keeping yourself and others safe isn’t really enforced; lots of people weren’t wearing masks. In a sense, it seems like they’re dispelling responsibility,” Tewari added. “I feel like it doesn’t build the community it needs to and further advantages students living in D.C.”

D.C. WeWorks have become some of the company’s most frequented locations for Georgetown students. Manushi Tanna (SFS ’24), a first-year from Lancaster, PA, was hopeful when the partnership began that she would have access to the same experience. “At first, I was excited about the Georgetown partnership with WeWork since it seemed like the university was somewhat listening to what students were saying about the struggles with virtual learning.”

She soon realized however that the distance to the workspaces posed accessibility issues. “I realized the closest one was an hour and a half away from me. The partnership is a nice thought, but in reality, it doesn’t make much of a difference for many students,” Tanna said.

Students in the DMV area also have to contend with the closure of a few WeWork locations in Virginia and D.C. The Crystal City WeWork in Arlington will be closing at the end of this month, in addition to three locations in D.C., with all four locations shutting their doors for good on Feb. 26. WeWork has stated that the closures are not due to COVID-19 and are instead part of a process of expansion from smaller spaces to larger offices.

One-third of the way through the semester, students are buckling down for the beginning of midterms and the fifth week of Zoom classes. Georgetown’s WeWork subscription aims to alleviate the stress of the semester and despite some challenges, students are certainly making use of it.

“Even though COVID-19 isolation is usually worse in rural and suburban areas than cities that have WeWorks, they are still nice to have,” Tewari added.